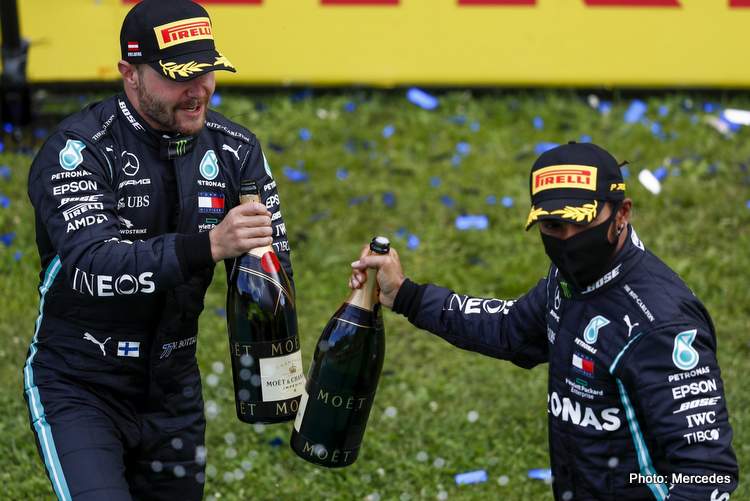 Mercedes report from the Styrian Grand Prix, Round 2 of the 2020 Formula 1 World Championship at Red Bull Ring, after a one-two for the black cars at the venue with Lewis Hamilton leading home Valtteri Bottas,

Lewis Hamilton: “This has tended to be one of my weaker tracks, so I am over the moon to have a performance like this today – so, so happy. This feels like a long time coming since the final race of last year and it is a great step forward to come back from a difficult first weekend.

“The team did a fantastic job with the strategy and then it was about keeping it together, staying off the kerbs and bringing it home. I tried to get the fastest lap towards the end, but I had 40-lap old Mediums, so it was going to be difficult against someone on new, fresh rubber.

“A big thank you to my team and everyone back at the factories, they have done a brilliant job. I think it’s easy to lose focus and determination, but I don’t ever see that with this team. We know there’s a long way to go and it’s a challenge for everyone, but this is a step forward, for sure.”

Valtteri Bottas: “Starting fourth, I think today was all about damage limitation and we managed to maximise everything available to us. Yesterday wasn’t ideal so that’s why it wasn’t 25 points today, but we still scored some good points, the car performance was great and I’m still leading the Championship, so it’s not too bad.

“I had a good battle with Max, I had quite a bit more pace than him at the end as we extended the first stint to create a tyre offset, but racing closely is always fun and it was good to get the pass done. It’s been an encouraging first couple of races so I’m looking forward to next weekend.

Toto Wolff: “I think we can be very satisfied with this weekend, with a great drive to victory for Lewis and Valtteri coming home to secure a 1-2 finish for the team. It’s been a tremendous job from everybody to get our worries from last weekend under control and deliver this level of performance.

“The gearbox issue was fixed, and the suspension concerns were still not 100% comfortable, but in the end, it was all good. This track hasn’t been too kind to us in recent years, but we were never really troubled here and bringing the two cars home like this is a nice result.

“Now we look ahead to Budapest and the final round of this triple-header. We have been starved of motor racing for so long, so we can’t wait to be back out on track again in just a couple of days.

“We just love the stopwatch, the brutal honesty of it and the Hungaroring is a great track and a very different challenge to Spielberg, so it will be interesting to benchmark ourselves there.

Andrew Shovlin: “A perfect result: well done to the drivers and to the team! And especially to everyone who was involved in getting on top of the electrical issues that we had last week.

“We only had three days to understand the problem and produce parts in time for free practice, but we seem to be in a good place now which is a huge relief. That certainly helped us have a much smoother race today. The car was pretty strong, and we were able to do what we needed in stint one.

“Lewis built a gap to Max and Valtteri got through the traffic so that we were in position to undercut or force him into stopping. We’d wanted to run a bit longer with Lewis on the first stint but we were approaching backmarkers so we decided to bring him in and bank the position.

“Valtteri stayed out to create an off-set tyre strategy to Max but again we decided to box as we approached some backmarkers at the end of the opening stint. The second stint for Lewis was straightforward, he was just managing his gap and looking after the car and power unit.

“Valtteri had a bit more on his plate; he lost a big chunk of time with some backmarkers who were racing each other. Despite that, Valtteri was able to put in some great laps and was forecast to catch him the end of the race, then Max suffered a bit of damage along with tyre degradation and Valtteri reeled him in more quickly, making a great pass to take the position.

“It’s fantastic to leave here with two wins and leading both championships; it’s not been our favourite track in recent years but we’re now looking forward to getting going again in Budapest in five days’ time.