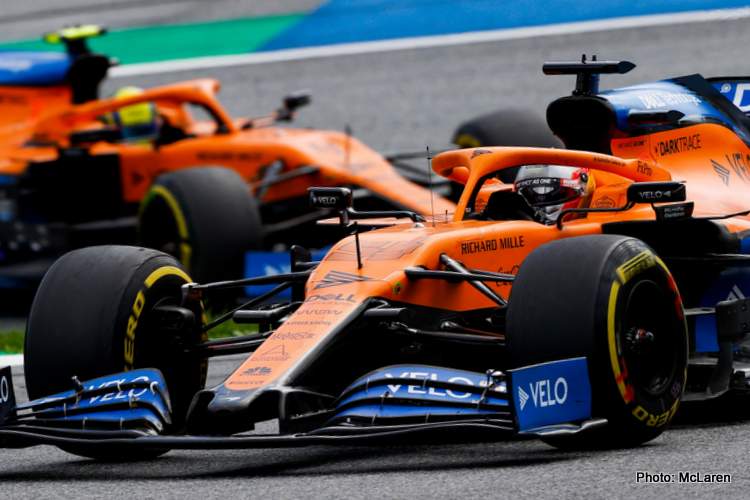 McLaren report from the Styrian Grand Prix, Round 2 of the 2020 Formula 1 World Championship at Red Bull Ring in which their drivers Lando Norris finished fifth and Carlos Sainz crossed the line in ninth.

Carlos Sainz: “A very disappointing day for me. We missed out on big points after a problem at the pit-stop. The first part of the race we were running P5 with a solid pace and managing the gap to the cars behind.

“Unfortunately, we had a bad pit-stop, which meant we came out of the pits in the middle of traffic. I had to push too hard too early to try to recover the gap, and that drained my battery and ultimately compromised my tyres for the second part of the race.

“One of those days when nothing goes your way. Time to turn the page and come back stronger, but we missed out on a good P5 today. We win and we lose as a team, so we’ll try to fight back in Hungary next week.”

Lando Norris: “A very good race from us today. First of all, the team did an awesome job with the strategy and I did a good job with managing the Soft tyres in the first stint.

“We got to lap 39 before we boxed and that was one of the key aspects to our race in allowing us to be so strong in the second stint, to go out on the Mediums and be one of the fastest on track for some of the laps. We managed to go from tenth all the way up to fifth, with three of those overtakes on the final two laps.

“It was a race where I had to go forwards and not maintain my position like I had to last week. It was much more a race of attacking and overtaking, which was nice to do. Very happy for myself but even more for the team, and getting some more points on the board with also the fastest lap from Carlos.

“A really good two weekends and a very good start to the season. We just need to try to maintain it into the next one.”

Andreas Seidl, Team Principal: “Second race in a row here in Austria and another good performance from the team and both drivers. It’s great to see both cars finish in the points, confirming we’re making progress in the right direction.

“We could see that both in dry and wet conditions we have a car that can fight with the competitors around us, which is obviously very encouraging moving forward. It will be very interesting to see if we can now carry this performance and momentum into Hungary and to other tracks with different characteristics.

“We want to apologise to Carlos for the issue we had at his first pit-stop, which made his race more difficult than it should’ve been. The delay cost him several track positions and we sent him into heavy traffic, which ruined his tyres and didn’t allow him to fight for the position he deserved to be in today.

“Carlos didn’t give up and did a great job securing the fastest lap, the second time in a row for us. Lando showed he’s a fighter despite the pain he suffered during the weekend. He continued to perform and stepped up when it really mattered, especially in the second half of the race and again with some exciting final laps. Great teamwork between the two drivers swapping on track when it was needed.

“Thank you again to Renault for ensuring we got the most out of our power unit and maximising our performance over the course of this weekend in varying weather conditions.

“Tomorrow we start another race week. We’ll take away a lot of positives from these first two weekends, but at the same time we’ll focus on all the areas we have to improve. As always, we’ll use the time next week to analyse in detail what happened, try to learn from it and come back stronger in Budapest.

“Well done to the FIA, F1 and the local promoter here in Austria, who allowed us to race again in the safest manner possible. Finally, a massive thank you to our partners and fans for their continued support, which has been incredible again despite not being able to be at the track with us.”