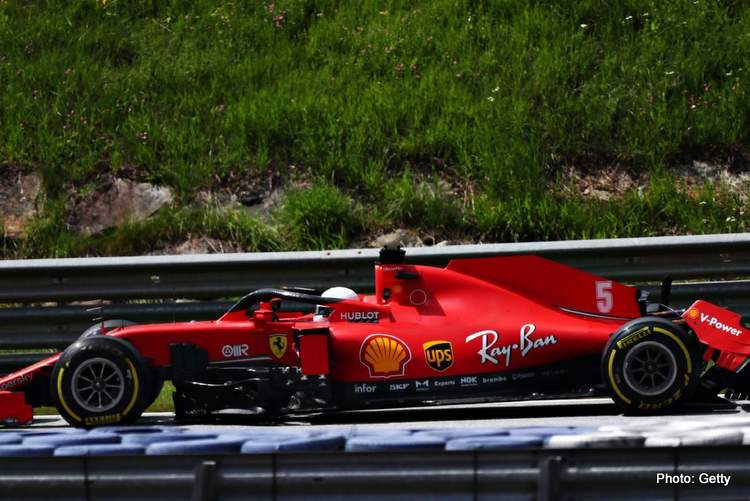 Things are going from bad to worse for Sebastian Vettel, booted out of Ferrari at the end of this year, few if any teams are available for him next year and in a race in which he needed to impress, he was out on lap one.

His Ferrari teammate Charles Leclerc was over ambitious in his lunge into the hairpin on lap one, clattering into unsighted Vettel and that was that.

Leclerc’s overly aggressive move was the kind of thing one sees all the time in sim racing and the F1 Game… but this time the bent metal was not pixels.

Vettel, faultless, suffered a broken wing and the team retired his car when he pitted. Leclerc lasted a little longer but it was an early shower for both drivers at a time when Ferrari needs results not civil war.

The German said in the TV pen: “I was fighting other cars, we were already three cars into turn three, and I was very surprised. I was not expecting Charles to try something. I don’t think there was any space.

“A big pity and something we should avoid, but not much I could have done differently. I was taking it easy and conservative because it was already very busy and tight.”

Vettel repeated, “I don’t think there was space, that’s why I think we collided.”

Last year during the Brazilian Grand Prix the pair also collided, as the on-track acrimony compromised the collective team effort.

Nevertheless, on Sunday, credit to Leclerc who immediately took the blame for the incident and told reporters, “I apologised. Excuses are not enough in times like this and I’m just disappointed in myself. I have done a very bad job today.

“I have let the team down. I can only be sorry, even though I know it’s not enough. I hope I learn from this and will come back stronger for the next races.

“It’s a tough time for the team. We don’t need that. The team don’t need that. I put all the efforts of the team in the bin. I’m very sorry, but it’s not enough. I was [too optimistic],” added Leclerc.

The team salvaged some pride with Leclerc’s second place at the same venue last Sunday, but a week later the team leave Spielberg empty-handed which will be a big blow to their campaign in this shortened season.

The gloom will be exacerbated by the fact that the solution to their engineering gaffe that resulted in a lemon of a car, which the SF1000 is proving to be. Whatever updates they brought from Maranello this week can go straight into the rubbish bin.

I am disappointed in myself. I’m sorry but being sorry is not enough. Seb hasn’t got any faults today. I’ve let the team down after them working a whole week to bring the updates early. Too eager to gain those places in the first lap. I will learn from it.

Unfortunately both cars had to retire. #Seb5’s car had too much damage and for #Charles16 it would have been too dangerous driving with the floor in those conditions. #AustrianGP🇦🇹 #essereFerrari🔴 pic.twitter.com/5MvELBzLl8