Haas: We still need to find some pace 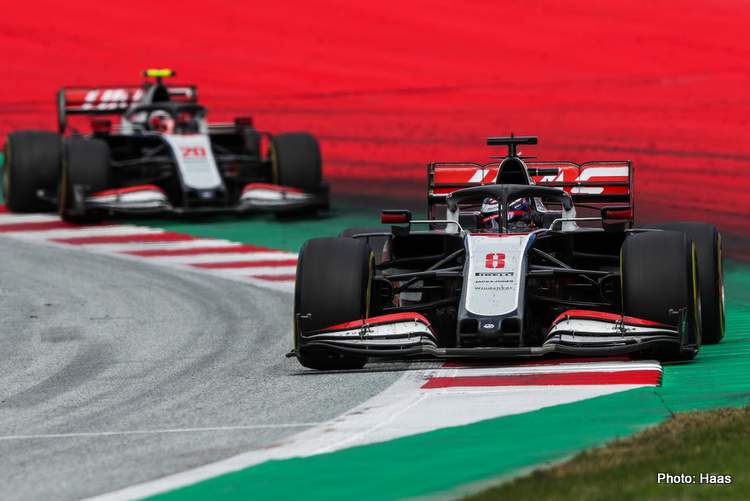 After the torrential rain that drenched the circuit on Saturday the skies cleared for Sunday’s track action, albeit with cooler temperatures compared to Friday’s running.

Magnussen started P15 on the Pirelli P Zero Red soft tires while Grosjean was mandated to begin from the pit lane after essential work was carried out on his VF-20 post-qualifying, contravening Parc Ferme regulations.

Magnussen made a strong getaway and moved up to P12 on a frantic opening lap which claimed both Ferrari drivers to accident damage at turn 3. Grosjean also started on the Red tires and joined the rear of the train, holding P17.

Magnussen came in for a fresh set of Yellow medium tires on lap 32 of the 71-lap encounter while Grosjean remained on track until lap 38, when he too came in for a set of the medium compounds.

Both drivers adhered to instructions from the pit wall in order to give the team its best chance at making progress – and that strategy paid off when Magnussen passed Antonio Giovinazzi for P12 on lap 69.

Grosjean followed his team-mate through a few turns later to move into P13 and both drivers hunted down Kimi Raikkonen in an enthralling finale. Magnussen fell just two-tenths shy of Raikkonen while Grosjean was only half a second behind his team-mate.

Formula One will travel to the Hungaroring, located on the outskirts of Budapest, for the Hungarian Grand Prix, which will take place across July 17-19.

Romain Grosjean: “Today the car was much better. It obviously wasn’t fast enough, but much better, so we’ll keep working from there. It’s important to feel good in the car, to feel confident. I had to keep pushing. Obviously, things were better than Friday and Saturday. That’s the positive to take from here.”

Kevin Magnussen: “We knew we wouldn’t have the pace today, we knew something odd would really have to happen to be up there. Unfortunately, the race didn’t really unfold like last weekend with a lot of retirements.

“I know there weren’t a lot today, certainly not enough for us to score points. I had fun again in the race though. I made a good start, gained a lot of positions on the first lap – it’s become my only weapon.

“The car was consistent, we were able to extend that first soft stint enough before going on the medium, and that was more than we’d hoped for. That’s showing this car can look after the tires and we can push the car in the race. We need to find some qualifying pace so we can start higher up.”

Guenther Steiner, Team Principal: “It was a better weekend than last weekend. The race was actually quite interesting, at least for us. The driver comments were a lot more positive than last weekend. We still need to find some pace. We at least showed here that we can race in our group.

“It’s a good starting point and hopefully we can continue this trend in Hungary. While last weekend was very disappointing, and we went away almost broken, now we’re really looking forward to the next race to see if we can do any better and improve on our results from here.”