Red Bull: The race will come down to strategy and pace 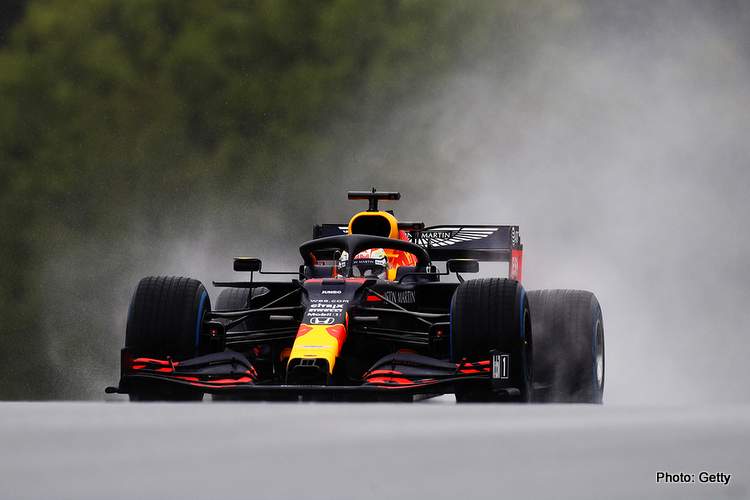 Max Verstappen will start Formula 1’s first Steiermark Grand Prix from the front row after a spin in the final seconds of a wet, treacherous qualifying session at the Red Bull Ring robbed him of the chance to challenge eventual pole winner Lewis Hamilton.

After comfortably making his way through the opening sessions in relatively good, albeit wet, conditions, the rain increased intensity in Q3 but despite the heavy rain the Red Bull driver spent the whole of the final session swapping P1 laps with Hamilton.

In the closing stages Max put his RB16 back into provisional pole with a time of 1:20.489s but Hamilton was going quicker behind him and stole P1 with a lap of 1:19.702. Max wound up for another but in torrential rain, he made a small error in turn nine and spun. That ended his challenge and Hamilton, on a clear track, eventually found even more pace to claim pole with a lap of 1:19.273.

Alex Albon, meanwhile, will start tomorrow’s race from P6. He qualified in P7, but McLaren’s Lando Norris was penalised three grid positions after qualifying in sixth for not slowing down under a yellow flag during Free Practice One.

Alex struggled a little with his RB16 in the opening two sessions but eventually unlocked his pace in Q3 and climbed to P3. But as the final laps came in he was pushed down the order and will start at the front of row four ahead of AlhpaTauri’s Pierre Gasly.

Max Verstappen: “It was a tricky qualifying with the conditions but overall I’m pretty pleased with second on the grid. Q1 and Q2 were fine and I felt very comfortable but in Q3 it rained more and with the extra standing water we were struggling a bit more and I wasn’t as happy with the balance with a lot of oversteer.

My final lap could, of course, have been a little better and I had a four-wheel drift over the last kerb but still it would not have been good enough to beat Lewis. Let’s see tomorrow in the dry as it will be a different day and hopefully we will be quick enough to fight for the win.

Starting on the front row gives us a good opportunity tomorrow to collect some good points and hopefully we can give Mercedes a hard time.”

Alex Albon: “On my side that should have definitely been better. It was my mistake, I just went off on my last lap as the track was improving and getting quicker otherwise I think we could have been P3. I was maybe a bit happier with the car balance last weekend so we’ve got some work to do and we’ll study tonight.

“Looking ahead to tomorrow, our race pace is strong as we saw last week so let’s see what’s for the taking. We’ll have to be smart with the strategy as everyone knows what to expect tomorrow after last Sunday, so let’s see what we can do.”

Christian Horner, Team Principal: “Qualifying in these weather conditions is very tricky but Max did a great job. He lost a lot of time on his last lap when he came across Sebastian who was coming into the pits, otherwise he would have been a lot closer to Lewis but I don’t think he would have beaten him on that lap.

“So, Max starts in P2 for tomorrow’s race, and Alex in P6. The Team did a good job today, working with the drivers to help them because they can’t see what is going on around them with all the spray in these weather conditions.

“Tomorrow will come down to strategy and race pace so let’s hope we can convert these grid positions into good results, but I hope the rain clears and we see the Austrian sunshine return.”