Honda: We are ready for a dry race 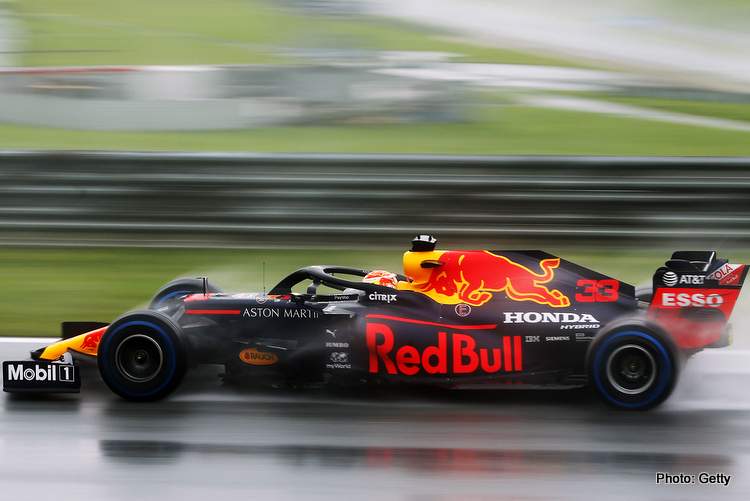 There was little running on Saturday at the Styrian Grand Prix but what little running there was delivered a dramatic qualifying session for both Aston Martin Red Bull Racing and Scuderia AlphaTauri.

Heavy rain prevented FP3 from taking place, and despite conditions improving in the hour before qualifying they then deteriorated again to delay the start of Q1.

Eventually the session started some 46 minutes late in extremely wet conditions and all four cars expertly negotiated the first part to advance into Q2. The second part of qualifying was equally tricky as rain began to fall harder and made consistent laps difficult.

Max, Pierre and Alex all progressed – in second, fifth and eighth respectively – while Daniil fell less than 0.2s short of a spot in Q3 and will start 14th after an extremely competitive session. In the end the battle for pole came down to Max against Lewis Hamilton, as the pair traded fastest laps in a thrilling final part of qualifying.

Max was second starting his final run and had put in the fastest first sector, while a personal best in the middle sector had him right on pace, but running marginally wide at the penultimate corner he spun and had to settle for second place.

That’s still another front-row start, while Alex will start from sixth and Pierre seventh after both were just over half a second further back from Max, doing well to negotiate the tricky conditions to secure top ten grid slots.

Sunday looks set to be a dry day so we’ll now analyse all of Friday’s running to prepare for the second race of the season.

Toyoharu Tanabe, Technical Director, Honda Racing F1: “Today the rain made life complicated for all the teams, even though we knew the wet weather was coming. We lost FP3 completely and although the rain eased off just before qualifying, it got stronger as Q1 started, so that the conditions were very difficult.

“Nevertheless, Aston Martin Red Bull Racing and Max Verstappen secured a place on the front row for the second time in a week and also the third in a row at this track, after doing the same in last year’s Austrian GP. Alex and Pierre also did well to get to Q3, to start from 6th and 7th respectively because of Norris’penalty, so a good performance all round.

“It’s meant to be a dry race tomorrow, so we will prepare f: WE are ready for a dry raceor that, with the intention for all four of our drivers to finish higher up the order than their grid positions.”