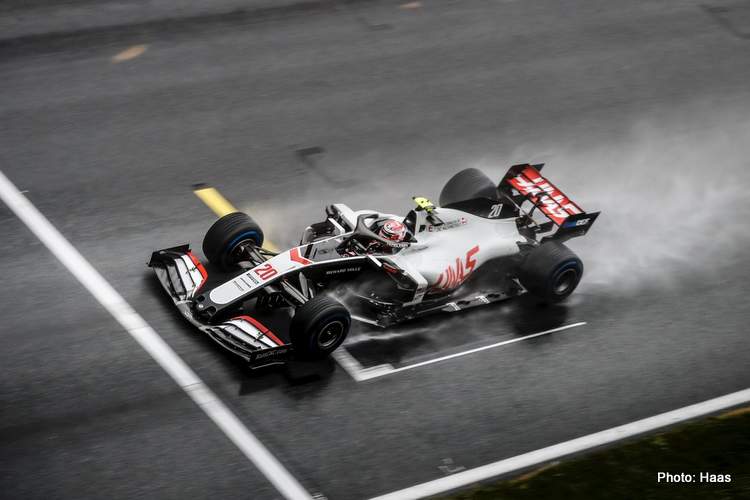 After the morning’s final practice session was cancelled due to torrential rain, Q1 saw the field take to the circuit for the first time on Saturday – all tackling the damp conditions on the Pirelli Cinturato Blue wet weather tires, and 46 minutes after the scheduled start of the session, the rain continuing to impact proceedings.

Kevin Magnussen utilized two sets of the extreme tires, setting his fastest lap of 1:21.140 on his final charge before the checkered to advance to Q2 in P15. Grosjean failed to set a lap time as he returned to the garage at the end of his out lap with a suspected ERS (Energy Recovery Systems) water pump issue – his VF-20 unable to return in Q1.

Romain Grosjean: “We had a problem with the ERS water pump – it wasn’t working so we couldn’t recover any energy on the out lap I did. So, we couldn’t even do a lap. It’s a shame as it’s a missed opportunity I guess.”

Kevin Magnussen: “It was good fun and I’m glad that they let us qualify in these conditions. There was a little bit of aquaplaning here and there, but it wasn’t a big problem. I’m happy they let us qualify today. For us, P15 is not a fantastic starting position, but I think it’s the best we could do – so I’m pretty happy with that. We’ll fight hard tomorrow to try and get into the top 10.”

Guenther Steiner, Team Principal: “It was a very interesting qualifying. It was very good from the race director that we started the session, that was a good decision. On our side, Grosjean’s car not going out is not what you want to see.

“We had an issue with the cooling of the energy storage unit. Kevin (Magnussen) did his best and we got out of Q1. He tried in Q2, but his last lap was not perfect, so we ended up 15th, which at the moment is really where we are. We need to be realistic about that.

“For the car that did run, all our operations worked well, and the guys did a good job. Let’s see what happens tomorrow when it’s dry again. Hopefully we don’t have the issues from last weekend, it is meant to be cooler, so hopefully we can go racing.”