Ferrari: Our updates didn’t show their worth on track 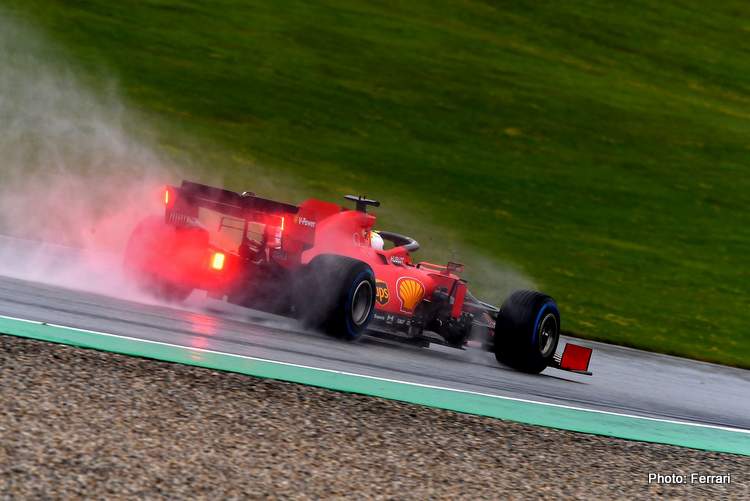 Sebastian Vettel will start the first-ever Styrian Grand Prix to count for the Formula 1 World Championship from the fifth row of the grid with Charles Leclerc on the seventh.

That was the disappointing outcome of qualifying which took place in driving rain at the Austrian track, just seven days on from the first race of the season held at the same circuit.

Q1. The rain started at 10am and from then on got heavier, which also affected the support races. Qualifying started 46 minutes late, at 15.46 as the rain eased very slightly. The first to take to the track on Wets, the only tyres that could be used in these conditions, was Sebastian who posted a 1’24”235, while Charles did a 1’24”658. The times began to tumble for everyone, with Leclerc doing a 1’20”871 and Vettel a 1’20”243, good enough to go through to Q2.

Q3. In the 12 minute session to decide the top five rows of the grid, all the drivers were still on Wet tyres, as conditions worsened. Sebastian improved four times, going from 1’23”310 to 1’21”651 to stay tenth.

Penalty. Adding to the team’s woes today, late in the afternoon, Charles was handed a three place grid penalty. The Stewards ruled that, during Q2, he impeded Daniil Kvyat in the AlphaTauri. Leclerc will therefore start from row seven in 14th place. The 71 lap race starts tomorrow at 15.10 CET.

Sebastian Vettel: “I was glad qualifying wasn’t delayed until forward to tomorrow, even though we were hoping for more. I think we tried everything we could but unfortunately it took too long to get the tyres, especially the fronts, up to working temperature.

“I was locking the fronts a lot and aquaplaning down the straight. On the last lap in Q3 I tried to risk everything, but I lost the car at turn 8 and didn’t manage to improve.

“At least it’s a lesson we have learned for the next time we face these conditions. The forecast is different for tomorrow and in the dry, our race pace looks a bit better, but we are still not where we want to be”.

Charles Leclerc: “We were just not quick enough today. When I look at the gap to the cars at the front, I am quite surprised. There’s definitely some work to do. In terms of balance, the car is nice to drive in the dry and in the wet it’s very similar.

“But yes, we’ve got some problems here and there that we need to solve and also I need to work on my driving in these conditions. Unfortunately, we had heavy rain when we went onto the second set of extreme wets in Q2, and we could not improve, which is a shame.

“I went for a more aggressive setup yesterday, which might have made my driving more unpredictable in the rain, so we paid the price today, but I am sure we’ve made the right choice for tomorrow and we’ll benefit from it.”

Mattia Binotto, Team Principal: “A really disappointing day. We have to accept that the stopwatch doesn’t ever lie. In two qualifying sessions, albeit in different conditions, we have not been competitive, not only against those who have been our closest rivals over the past few years, but also against others, who up to yesterday were generally behind us.

“We worked very hard to bring updates to the car earlier than planned, but they didn’t show their worth on track. We have to work out why and change this state of affairs, which is just not good enough for a team by the name of Ferrari. We mustn’t get het up about it, but we cannot ignore the facts.”