Williams: We got through some interesting items 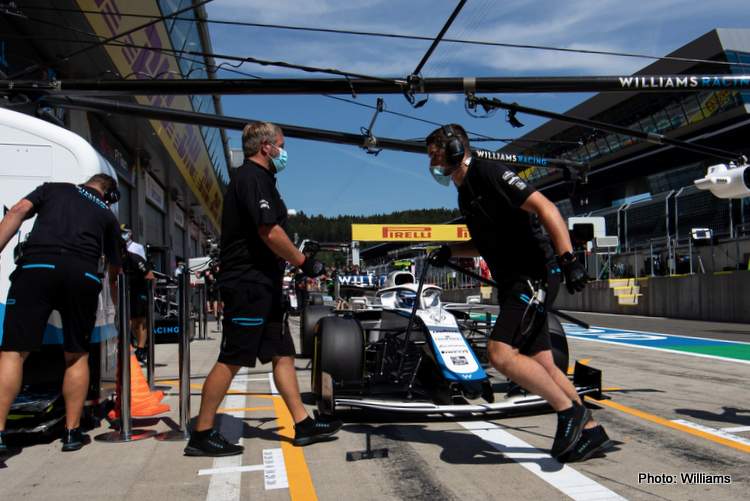 It was one of the better days for Williams, no longer anchored to the bottom of the timesheets, with George Russell 15th and Nicolas Latiffi 17th in FP2 for the Styrian Grand Prix, and Jack Aitken getting his first FP1 outing with the team.

They reported on Friday evening:

Dave Robson, Head of Vehicle Performance: “Nicholas had a frustrating start to the weekend with a gearbox issue early in FP1. This meant that we had to reshuffle the plan for the rest of the day, but we still got through some interesting items.

“Jack Aitken made his debut with the team during FP1 and did an exceptionally good job, showing good pace and control, as well as providing valuable feedback to his engineers.

“All the preparation we have done with him since returning from the shutdown period paid off and Jack was able to complete a good and varied programme, taking some of the key items from Nicholas after he was forced to stop.

“The mechanics did a good job to rebuild Nicholas’s car with a different gearbox ready for FP2 and, with George back in his car, we were able to complete a full and intense programme.

“With the weather forecast looking bleak for tomorrow, we, like most teams, took the opportunity to use an extra set of the qualifying Pirelli tyres and this allowed us to push our qualifying simulation a little harder than normal.

“Both cars completed the session with some high fuel running as we took the opportunity to finalise preparations for Sunday’s race.

George Russell: “This morning I was sat on the sidelines for FP1 as Jack was in the car. This afternoon wasn’t quite as positive as we were hoping, and the track was absolutely roasting today.

“We did try a lot of things with the set-up and they weren’t as good as we had hoped. However, it was productive to understand why it wasn’t as positive and we learnt from that.

“I am quite pleased having this back-to-back at the same track, because it has given us the opportunity to try something quite drastic. I would like a nice and consistent rest of the weekend so I can go out there and show what I can do.

Nicholas Latifi: “FP1 was not ideal as I had a gearbox issue, which ended my session after one lap. It is what it is, these things happen. We had quite a busy FP2 programme planned prior to the issue in FP1 because of the unknown with what’s going to happen with the weather tomorrow.

“In general, I was quite pleased with FP2, we tried somethings coming off last weekend, just to try and improve my confidence with the car and it seemed to go in the right direction. My relative pace compared to where I was in qualifying and where I was to George is better now.

“In general, the changes we made from last weekend and this weekend have helped my confidence in the car and we are going in the right direction.

Jack Aitken: “Driving the FW43 today was simply awesome. Jumping into a Formula One car on a race weekend is always going to put a smile on my face!

“The first run I was just settling in, but I was able to push on in the second run and started to feel more at home. This is the whole purpose of me doing this as the team’s Reserve Driver.

“It’s a shame Nicky couldn’t run, but we took on some of his run plan and managed to tick a lot of boxes which was great. Overall, I loved driving today, and can’t wait for the next time where I can push even more.