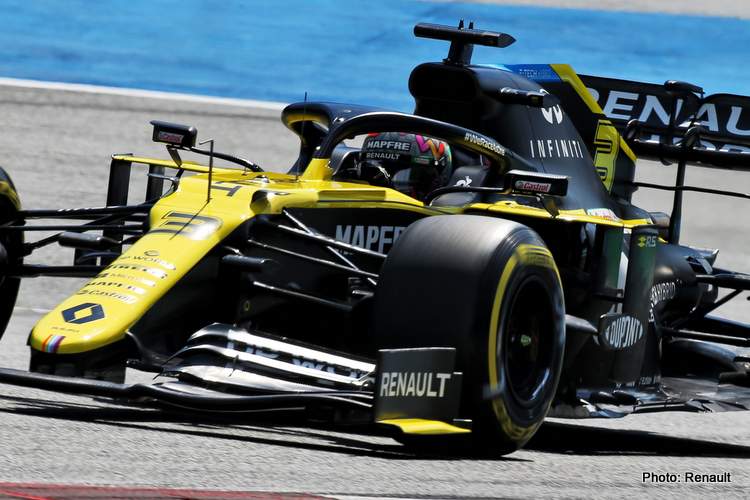 Not a great day for Renault, with Daniel Ricciardo trashing the RS20 early on in FP2 for the Styrian Grand Prix, the yellow and black car crunching into the Red Bull Ring barriers and setting the team back ahead of qualifying tomorrow.

On track they were on the cusp of the top ten with Esteban Ocon ending the day tenth fastest, while Ricciardo was good for ninth in FP1 but the team are well down on their customers McLaren. Nevertheless, the soundbites are positive

This is what the Renault team and their drivers had to say at the end of the day:

All eyes will be on the weather tomorrow in the Styrian hills with disruption to the programme likely as a result of predicted heavy rain throughout the day.

What we learned today: We’re heading in the right direction for the rest of the weekend, but we’ll be keeping the weather in mind ahead of tomorrow.

Daniel Ricciardo: “Unfortunately, it was a very short second session for us. That first push lap was going quite well up until Turn 9. It was a mistake, it all happened very quickly so I’m not sure what went wrong. I turned in and just lost the car straight away.

“I know these things happen with cars and in Formula 1, so it’s not out of the ordinary. I’m OK, however, I feel bad for the guys. We’ll just move on. The car felt fine this morning, especially towards the end. The second session would have been interesting, so we’ll just have to find out our pace tomorrow or Sunday.”

Esteban Ocon: “It’s been a great day in terms of learning on our side. Our day ran smoothly, and we completed the planned programme, which was good. It was unfortunate to see Daniel not end the session, but the most important thing is that he is OK from a health point of view.

“There are a few little things to improve, but there are also some good areas and good points where we know we’re strong. It’s definitely been a useful day and we want more tomorrow.”

Ciaron Pilbeam, Chief Race Engineer: “Free Practice 1 went well for both drivers, who ran through some setup work based on what we found here last weekend. They worked through slightly different plans in the morning session, as Daniel missed a lot of high fuel running in the last race with his early retirement.

“Daniel’s afternoon was short, with an unfortunate spin into Turn 9 into the barrier ending his session. He’s OK, though, and the car will be ready to run again by tomorrow.

“Esteban had a very productive afternoon, and along with almost all other drivers ran an extra set of Soft tyres, brought forward from FP3, because of the high chance of heavy rain throughout Saturday.

“Overall, it’s been a bit of a mixed day for the team, but the running that we did was productive and good preparation for the rest of the weekend.”