Haas: We don’t really know where we stack up 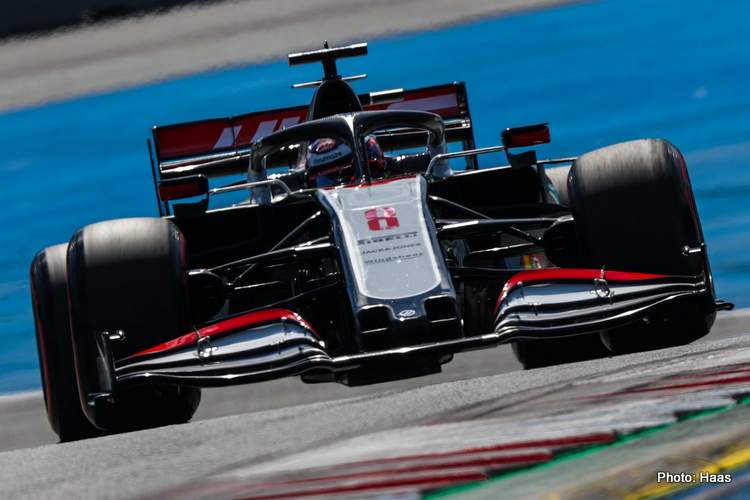 The second round of the 2020 FIA Formula One World Championship began with practice Friday at the Red Bull Ring as teams prepared for Sunday’s Styrian Grand Prix.

Two 90-minute sessions – FP1 and FP2 – on the 4.318-kilometer (2.683-mile), 10-turn circuit were run under clear skies and warm temperatures – in contrast to the forecast of heavy thunderstorms which threaten Saturday’s final practice and qualifying.

Grosjean started his FP1 run plan with a 10-lap baseline stint on the Pirelli P Zero White hard rubber before switching to the Yellow medium compound. His best lap on the medium tires was a 1:06.446 which placed him 16th overall. Magnussen banked just three early laps, the Dane failing to set a time in the session as his VF-20 languished in the garage after an issue with the energy storage unit required a replacement installation.

FP2 saw Grosjean and Magnussen utilize two new sets of Pirelli P Zero Red soft tires for their qualifying simulation runs. Magnussen’s best lap was a 1:05.790 for 18th on the timesheet with Grosjean one place behind on a 1:06.096 for 19th. Both drivers ended the session with high-fuel runs to the checkered.

Romain Grosjean: “Today we had a bit of everything sadly. The balance wasn’t great this afternoon, we struggled with a lot of inconsistency. The high temperatures don’t help you when the balance isn’t great. But that’s the same for everyone, we just have to try to work better. We’re looking at all the parts making sure everything is under control. We’re going to try to put something together for the rest of the weekend.”

Kevin Magnussen: “I didn’t get much running in FP1 but got a few more laps in this afternoon in FP2. We weren’t really as competitive as we’d hoped for, but we’ll keep working on it. I didn’t really have a balance problem, the car felt pretty good to drive. It’s mainly grip and power.

“That’s very simple but very difficult at the same time. I still feel the car is more competitive in the race than in qualifying, which is encouraging of course. We would obviously like to find a little more qualifying pace, that’s for sure. The weather’s looking a bit iffy for qualifying, there could be a chance there. If there is, we’ll take it.”

Guenther Steiner, Team Principal: “It’s been a challenging Friday. We worked on some testing on the brake cooling, obviously, after the problems we had last week. We tried some qualifying runs, as there’s a chance that it’s cancelled tomorrow, and maybe doesn’t even take place on Sunday morning – in which case the FP2 times will count.

“We don’t really know where we stack up as we don’t know what everyone else was doing. We’ve got a lot of work in front of us over the next weekends. We’ll keep on working hard trying to make it better. On the other side, I don’t think the hot weather helped us today, but we know that can happen. Hopefully things are cooler on Sunday.”