Ferrari: We had a difficult day 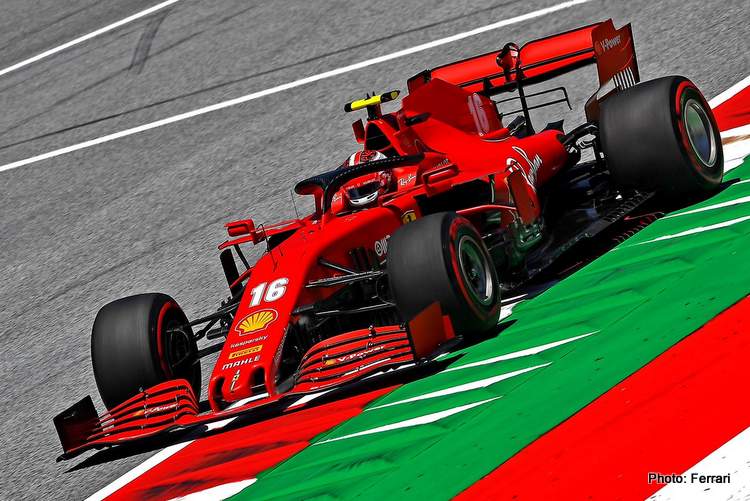 This was a very busy Friday free practice at the first Styrian Grand Prix for Scuderia Ferrari. Charles Leclerc and Sebastian Vettel had a programme of data acquisition and evaluation of various updates brought this week from Maranello for the SF1000.

The entire Gestione Sportiva worked day and night to do this earlier than planned (Hungary) to make the most of the fact that for the first time in Formula 1 history, there are two races at the same track in the space of two weekends.

Morning. In the first free practice session for the Styrian Grand Prix, the Scuderia Ferrari pair of Sebastian and Charles completed a total of 53 laps. Both men worked on evaluating aerodynamic updates and on set-up. Leclerc did 25 laps and Vettel 28, using the Hard and Soft compounds.

The German also ran a new helmet design specifically relating to Styria as he is keen on the area, featuring a topographical map with contour lines.

Afternoon. The team programme for the afternoon remained unchanged. Running mainly on the Medium tyres, the two drivers completed 75 laps, still gathering plenty of data which will be analysed overnight to get a complete picture of the efficiency of the new aero package brought here.

With the chance of tomorrow’s qualifying being held in the wet, the team worked mainly on race set up, deciding to use just one set of Softs for the qualifying simulation and both drivers set their best times on this compound.

Charles posted a 1’04”706, which put him ninth on the list, while Vettel set a similar time, but as he ran wide at the penultimate corner, it was disallowed for exceeding track limits. The German’s best time was therefore the 1’05”613 he did on the Medium tyres and so not representative. The drivers ended the session doing the usual long runs with a high fuel load.

Programme. As mentioned, tomorrow the weather is due to change radically for the worse, from today’s heat to thunderstorms and far cooler conditions. The third free practice session is scheduled for 12 CET, with the grid deciding session starting at 15. The first-ever Styrian Grand Prix gets underway on Sunday at 15.10.

It’s a significant recognition for the Italian track, owned by Ferrari. The circuit is very popular with car and motorcycle drivers and indeed everyone in motorsport and it features a truly spectacular setting.

Charles Leclerc: “We had a difficult day, even though towards the end, we made some progress on high fuel load runs. Let’s see whether tomorrow or on Sunday, depending on the weather, we can also make progress in low fuel conditions.

“There’s potential in the updates we’ve brought here. We need to keep working on them to tune them and define all they can deliver. I am happy about the prospect of rain, so let’s see what tomorrow brings. Hopefully, if it rains, it won’t be too hard, so we’ll still be able to take on the track and see where we can be on the starting grid.”

Sebastian Vettel: “Today the car felt a lot better than last week. Right from the start, it was a different car and I was just able to get on with it. Now I hope it stays like this. If you look at the time sheet, I got my best lap deleted so obviously it wasn’t a great day for lap times, but there will be rain tomorrow, so we are just preparing in case quali is on Sunday.

“For us, the main thing was testing the upgrades that we brought. We put them on the car step by step and they seemed to work well. We still need to have a look and find the best window where the car is happiest. We tried quite a few things on the brakes and I still need to find the rhythm. Apart from that, we did our usual Friday homework. Let’s see how wet it’s going to be tomorrow, it might mix things up.”