Mercedes: We need to find out where the performance has gone 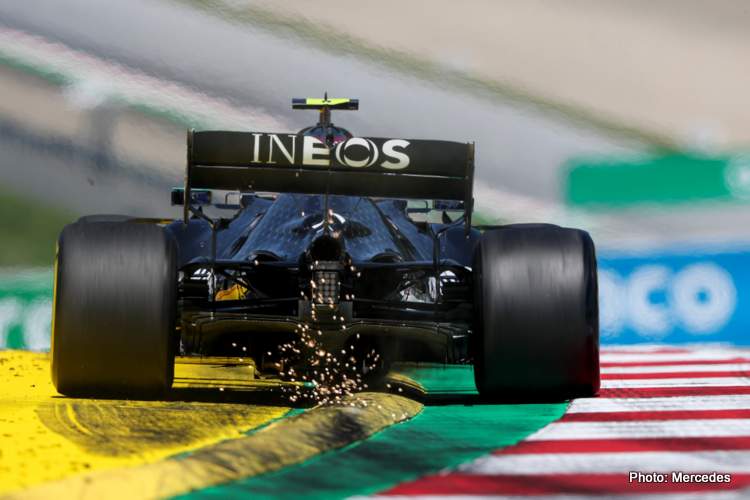 Valtteri Bottas did finish the first day of the Styrian Grand Prix weekend second-fastest by a narrow margin, but the Mercedes team was far more subdued this Friday than they were a week ago at the same venue.

While Bottas’ best effort in the afternoon FP2 session was good for second best, Lewis Hamilton could only manage sixth. In the morning the pair were third and fourth respectively; this is what they and the team had to say at the end of the day at Red Bull Ring:

A productive day of running for the Mercedes-AMG Petronas F1 Team, but work to do tonight after Friday’s practice sessions for the Styrian Grand Prix

Valtteri Bottas: “It was a very useful day of practice. We had quite a few things to try after last weekend. FP1 was mainly looking into whether we had fixed the reliability concerns from last Sunday. The team is still looking into that, but I think we have made some progress.

“We made some good set-up tweaks and I tried to use the learnings from last weekend, in terms of one-lap pace and driving style over a race distance. We are all getting to know this track pretty well now, but still it’s always good fun to be on track here. I still feel really good in the car, which is good news, but in the end the next two days are the ones that count.

Lewis Hamilton: “It felt relatively normal out there today, but the pace was quite far off, so we have a lot of work to do this evening to try and figure out why. I was feeling good in FP1 and the start of FP2 felt pretty good too, but then it started to drop off.

“Others out there looked quick and Valtteri has good pace. It seems like the field is bunching up a bit more, but it’s always tough to read into what happened in practice. We’ve got some work to do, to look into the data and find out what’s going on. Hopefully tomorrow we’ll be in a better position. It looks set to be wet tomorrow, but it’s fun to be out there in those conditions so hopefully we can still drive in the rain.

Andrew Shovlin: “It’s been a busy week in the factory trying to understand and produce a solution for the electrical issues we had throughout last weekend. New looms arrived in time for the car build on Wednesday and they ran successfully today.

“We’d like a bit more running before we conclude that it’s resolved, but it certainly seems to have improved our situation. On today’s programme, first practice was quite straightforward. We had a few test items on the car, along with some high-downforce parts in preparation for Budapest.

“The second session wasn’t so simple. We’d all received an email from Michael Masi at the FIA to say that the lap times for FP2 could be used to make up the grid, in the unlikely event we cannot run on Saturday or Sunday morning.

“That meant everyone was trying a bit harder, so we dropped the fuel a bit and pulled another set of Softs from Saturday to Friday. But on reflection, we should have gone a bit further. For Valtteri, the car was less easy to drive than last week but not by much. We created a bit more degradation on the long runs, so we need to understand where that’s coming from.

“But it shouldn’t be too hard to solve. Lewis had a more difficult day, particularly in the second session. The car wasn’t able to get close to the pace he had last Friday on both the single-lap and long runs. So, we’ve got some work to do tonight, to try and understand where the performance has gone.

“But we’ve already found a few clues that we’ll dig into over the course of the evening. The weather doesn’t look great tomorrow and we’ve hardly run this car in the wet, so it could be an interesting day if conditions allow Qualifying to go ahead.