Ricciardo: Alonso needs no help from me 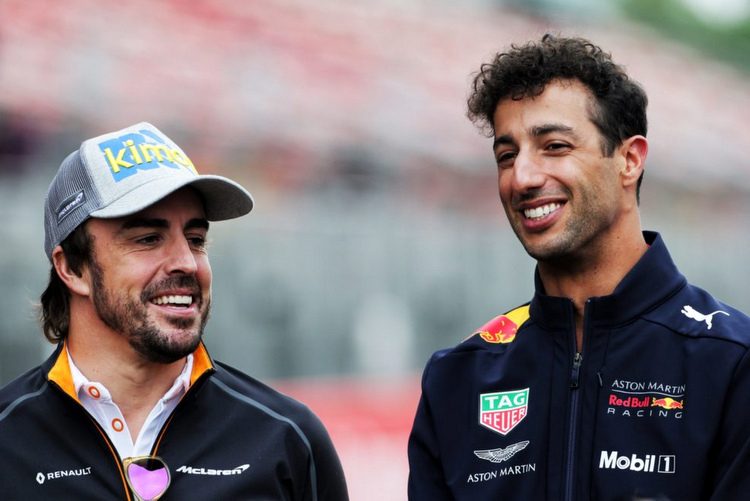 Daniel Ricciardo has welcomed Fernando Alonso’s Formula 1 return as his Renault replacement next year while ruling out sacrificing any time in the car to help the Spaniard get up to speed.

The Australian, who is moving to McLaren at the end of the season, told a Styrian Grand Prix video news conference in Austria on Thursday that he was excited about the double world champion’s comeback, announced the day before.

“It’s going to be great obviously for the sport. He’s such a name in the sport and has been for so many years,” said the 31-year-old of a rival who will be 39 this month.

“To return with the team and the brand that got him his titles I think is a good fit. And I’m excited to race against him again.

“It’s cool. The young guys are good but they make me feel old, so having another older driver on the grid now it’s better for me.”

Alonso last raced for McLaren in 2018 and Ricciardo was asked whether he would be happy to hand over his car for any Friday practice sessions this year. The answer was no.

“I heard the words ‘help Fernando Alonso’. He doesn’t need any help. It didn’t look like he’s slowed down at all with age. His last season in F1 was a pretty strong one from everything I heard and saw.”

Renault team boss Cyril Abiteboul said on Wednesday there were no plans to give Alonso track time at race weekends but they might run him elsewhere in a 2018 car.

Ricciardo’s French teammate Esteban Ocon, for whom Alonso was a boyhood hero, said the Spaniard would help build something new at Renault.

“He’s very motivated. I had him on the text yesterday or before yesterday and he’s very keen to come back,” said the 23-year-old.