Renault: The car is considerably better than last year 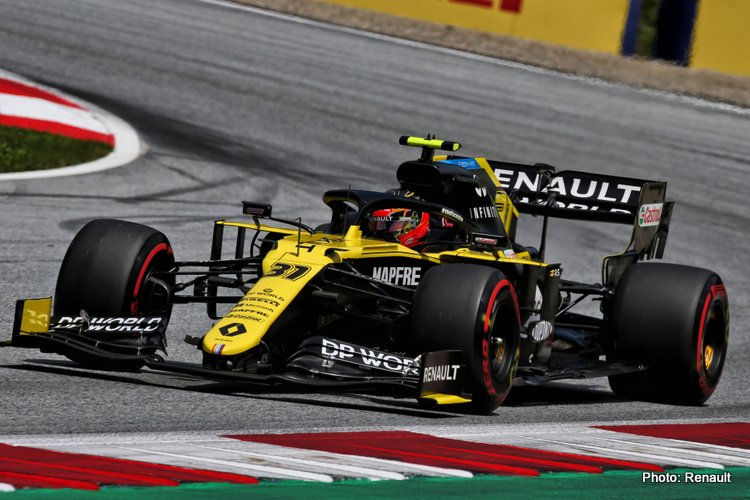 It was evident in Austria last weekend that Renault had a fairly decent package, of course not yet among the top teams they did find some time ion their package and thus are confident ahead of this weekend’s Styrian Grand Prix, Round 2  of the 2020 Formula 1 World Championship.

This is what the French team and their drivers had to say before engines fire-up for free practice on Friday at Red Bull Ring:

Drivers Daniel Ricciardo and Esteban Ocon and Chief Race Engineer Ciaron Pilbeam share their thoughts on the second race of the season in Austria.

Daniel Ricciardo: “I think there were a lot of positives from the weekend, our qualifying pace was up there, and I know with a clean lap we could have been further up the grid. That’s the goal for this weekend.

“We’ll look to refine some key areas to make sure we’re well prepared for both qualifying and race. I’m excited to get going again as we know anything can happen in Formula 1 and we want to be in a position to capitalise on any opportunity.”

Esteban Ocon: “To score points on my first start with the team is really satisfying. I know that it’s the team’s first points in Austria since returning to Formula 1, so that’s quite nice and demonstrates everyone’s hard work.

“It’s been a while since I last lined up on the grid too, so I’m pleased to get back into action with some kind of reward in the bag. Friday practice this week brings us the chance to work on those small details which should make a difference.”

Ciaron Pilbeam, Chief Race Engineer: “The car is considerably better than last year. This circuit was challenging for our car last year, and we have definitely made progress. We need to capitalise on the improvements.

“Qualifying was disappointing as both cars could have been higher up the grid. The order of the teams has moved around since the end of last year, and we are amongst several teams in an upper midfield group.

“The forecast this week does look quite unstable and it is likely to be wet at some points of the weekend. In the build up to last week’s race we experienced a couple of thunderstorms and heavy downpours right up until Friday’s first practice. It then changed and became dry but it could be interesting if we see some rain this weekend.”