In the Pitlane: Vienna slice 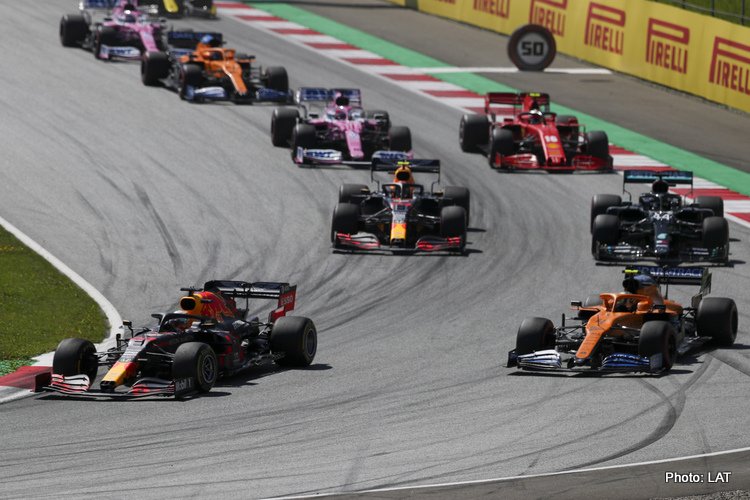 The show eventually got on the road with the first race of the season held at the Red Bull Ring in Spielberg.

Behind the scenes, there has been frantic lobbying by Helmut Marko head of Red Bull’s driver development program of the Austrian government to make the race a reality.

The Austrian wanted the race to happen even more so than his “coronavirus training camp” that left Max running for the toilet paper.

The Austrian GP has been good for Red Bull racing with Max winning in 2018 and again in 2019 but sadly for the team, the 2020 race was to end in disappointment.

The circuit is of course owned by Austria’s richest individual Dietrich Mateschitz. It is a real Vienna slice with Mateschitz owning the circuit and two of the competing teams whilst at the same time Red Bull, according to reports in their home country, are preparing to rival ORF and try to bring Formula 1 broadcasts to their free-to-air channel Servus TV.

Mateschitzhas committed to paying all the Red Bull Ring personnel in full during the pandemic so it is just rewards that they managed to secure two races.

Austria was well represented at the race with Toto Wolff and Racing Point’s title sponsor, the Austrian company BWT.

There was a noticeable absence of an Austrian driver on the grid which is a pity as Austria has a rich heritage of drivers, the likes of, Jochen Rindt, Christian Klien, Karl Wendlinger, Roland Ratzenberger, Alexander Wurz, Gerhard Berger, and Niki Lauda.

Mateschitz manages Red Bull and has control over the brand but although It is widely believed he owns Red Bull his shareholding is 49% with 49% being owned the consumer products giant the British–Dutch company Unilever.

Maybe Mateschitz should be looking over his shoulder as Unilever has signed a multi-year technical partnership with McLaren from the start of the 2020 Formula 1 season after parting company with Williams and its Rexona brand sponsorship.

On a Footnote: the Austrian crystal company Swarovski offers a F1 helmet embellished with crystals. Each helmet is adorned with approximately 40,000 crystals! Oh, a snip at £30,000+

Ordinarily, a team will provide their drivers with a “company” car and hope for the resulting publicity, think Instagram.

Now that’s great if you drive for Mercedes, Ferrari, McLaren or Alfa Romeo, not so good if you drive for cash-strapped Renault and are handed the keys to a Megane, watch Daniel Ricciardo’s smile disappear faster than his chances of a race win.

It will be interesting to see if Sergio Perez and Lance Stroll get nice new shiny Aston Martin Vantage’s next year or if Stroll Snr will knock that idea on the head.

Some drivers go their own way with Daniil Kvyat driving a Porsche 911 but just like on the track, it’s hard to beat Lewis Hamilton, who owns a whole host of luxury vehicles including a McLaren P1, a Pagani Zonda 760 LH, a Mercedes AMG SLS Black Series, a Mustang Shelby GT500 and a 1966 Shelby Cobra 427. Now that is a collection.

Hot on his heels on and off the track is Max Verstappen, who according to Italy’s Gazetta dello Sport, has parted with an estimated $1.75 million for the privilege of owning a Ferrari limited-edition Monza SP2 roadster.

Let us just hope he does not encounter the same problem Kevin Magnussen had when he drove for McLaren and never received his £270,000 McLaren 650S. Well, the reason, he was so young, it was difficult for McLaren to find an insurance policy that would cover him for a reasonable amount of money.

I hope Max has got a good insurance broker or it will be third party, fire and theft only!

The season has eventually got underway but the cloud that is Covid-19 still looms large. The economic fallout of the global pandemic is only just beginning to show its true devastation on individuals and economies.

F1 is facing a harsh economic reality on many fronts including TV revenue, hosting fees, hospitality, and sponsorship. Approximately 15% of F1’s annual income of $2bn is generated from Liberty’s global sponsors Rolex, Heineken, Emirates, DHL, Pirelli, and Aramco. These companies’ logos are displayed on the bridges and trackside boards at every race.

All the sponsor’s businesses are affected by the Covid-19 pandemic and all have different circumstances and reasons for their involvement in F1.

The greatest concern is the United Arab Emirates state-owned airline Emirates whose business has been decimated. The Emirates Group, which employed 105,000, has reduced basic wages by 25% to 50% for three months from April (except junior staff) and has laid off hundreds of pilots and cabin crew. Emirates has since said it could take it up to four years to resume flights to all 157 destinations it flew to before the pandemic.

Sheikh Ahmed, CEO and founder of the Emirates Group according to Reuters has told staff, “We continue to take aggressive cost management measures, and other necessary steps to safeguard our business, while planning for business resumption.”

“At some point, if our business situation doesn’t improve, we will have to take harder measures,”

Emirates are major sponsors not only to F1 but in Cricket, Football, Rugby, Horse Racing, Sailing, Tennis, Golf, Cycling, and Baseball.

It is hard to imagine the airline continuing its involvement and instead trigger a break clause in its F1 contract which runs until the end of 2022.

Then there is Heineken whose contract expires this year and they may well choose to leave as beer sales have plummeted as the hospitality lockdown bites. Heineken’s sales were down 14% in March and first-quarter profits fell 68% to £83m.

Heineken has suspended all discretionary spending and capital expenditure, so it looks like the writings on the wall or actually no longer on the wall.

Ralf Schumacher hit the nail on the head when he told German broadcaster DPA “If a board of directors must decide between firing people or doing a Formula 1 project, that’s not easy.”

There may be good news, F1 has an opportunity to cut costs and reappraise its business model and reduce the global sponsorship rates to levels that are attractive to newcomers.

On a footnote: Did Bernie pull a fast one on Liberty that was reminiscent of days gone by when he was a second-hand car salesman.

In an interview with the Financial Times in 2018, Carey admitted that “the perception was just there are sponsors waiting…They were lined up out there and as soon as we had somebody to go call on them, they were just going to sign up. The world’s not that simple.”