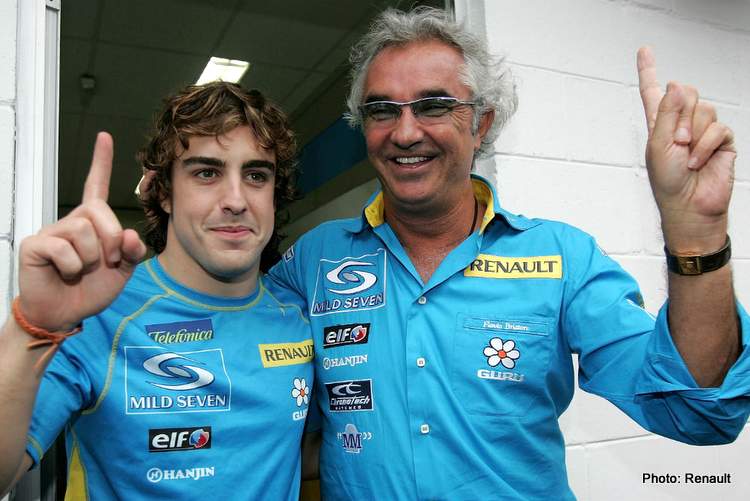 Fernando Alonso most loyal fan and partner Flavio Briatore has been a key player in orchestrating Fernando Alonso’s return to Formula 1 on a two-year deal, set to be announced by Renault chiefs on Wednesday.

From the moment Sebastian Vettel has pushed out the Maranello door, a swift round of musical chairs resulted in Carlos Sainz and Daniel Ricciardo seated at Ferrari and McLaren respectively, freeing up a cockpit alongside Esteban Ocon at the French team.

Step up Alonso and, by all reports, Briatore who mentored the Spaniard from his earlly days in Formula 1 and two the two F1 titles in 2005 and 2006.

Corriere della Sera correspondent Giorgio Terruzzi has reported how Briatore, the controversial Italian entrepreneur who left the sport in disgrace, played a role in the deal: “Flavio Briatore has managed the crucial phases of the agreement which has the approval of new Renault president Luca de Meo. The goal is to give the team a boost and make it competitive again.”

Briatore told Gazzetta dello Sport, “A year out of Formula 1 has been good for Fernando, he is fully motivated, He has detoxed and I see him as more serene, ready to return.”

Briatore is not surprised by the demise of Vettel at Ferrari, “In F1 it has always been about having the winning recipe. You must have one driver who is focused on the world championship and the other who collects big points, stealing them from rivals.

“Vettel paid for the fact that a very fast boy arrived at the team. It surprised him and the team, as happened at McLaren with [Lewis] Hamilton [in 2007]. Two drivers at the same level in a team eventually risk-taking points off each other.”

While Alonso has commitments this season, the Indy 500 springs to mind, he has nothing beyond this year which means the timing is right for the 38-year-old whose new deal with Renault is set to keep him in the top flight until the end of 2023 – for a third stint with the French team.