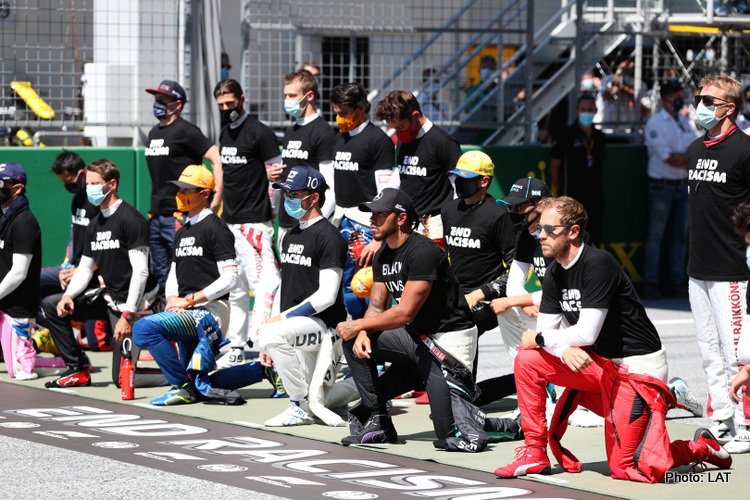 Lewis Hamilton’s performance was not impacted by the debate among drivers over whether to kneel ahead of the Austrian Grand Prix, according to Mercedes team principal Toto Wolff.

Hamilton was one of the 14 drivers that took a knee in order to protest racism prior to the race’s start, while the other six decided to remain standing.

The six-time world champion has been a vocal supporter of recent Black Lives Matter protests and wore a t-shirt sporting the movement’s logo on the grid.

During the race Hamilton picked up a five second penalty following an incident with Alex Albon that saw him demoted from second to fourth position, but Wolff said the off-track circumstances did not affect his form in the car.

“He was in a very good way,” Wolff said.

“No difference to all the other weekends that we have worked together. It is a topic that is very close to his heart, but it has no impact on his racing.

“You could see it in the race. He was doing just fine. He was quick. He could have challenged for the win. It was on team’s side that we didn’t give them a car that was reliable enough to really show the speed.

“And the incident with Albon, I clearly think that was too harsh. He had full lock on the steering wheel. There was a lot of room left. And that collision should have, in my opinion, been judged differently. That had nothing to do with Lewis’s performance that was on top as many other weekends.”