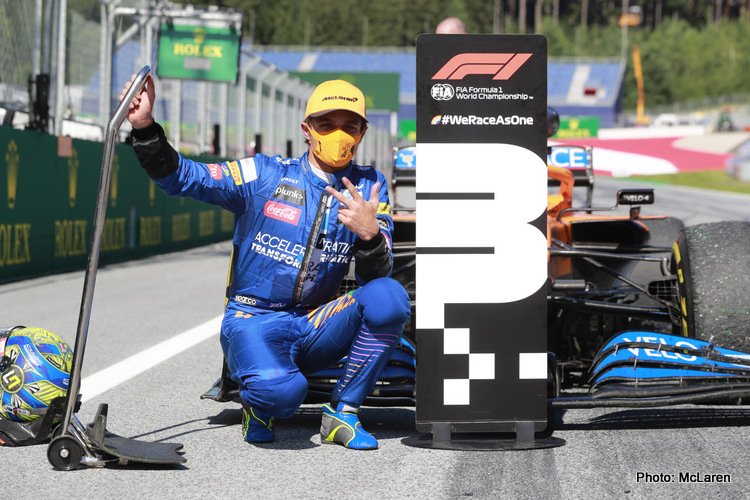 McLaren’s Lando Norris says he took particular notice of the absence of fans as he celebrated his maiden Formula 1 podium in Austria on Sunday.

The COVID-19 pandemic had forced the sport to go behind closed doors for the first time to get the much-delayed season started.

“I think we can all be happy we’re here racing and procedures that are put in place are pretty bulletproof… but it’s a bit different for me,” said the 20-year-old.

“These guys are used to being on the podium quite a bit (but) for me it’s my first time,” added Norris, third behind Mercedes’ race winner Valtteri Bottas and Ferrari’s Charles Leclerc.

“And I think something that makes it so special is always having the crowds there, celebrating there with you, whether they are always your fans or not. It just makes up the atmosphere so much and it adds a lot of excitement.”

The stands at Red Bull’s home circuit have been filled in recent years with thousands of orange-shirted Dutch fans making the trip to cheer on their idol Max Verstappen, winner in 2018 and 2019.

The nearby fields, now with cows grazing in them, are normally campsites for race fans, reverberating with music and the smoke of barbecues.

“I know there are many loyal fans to me watching at home and I know the most important people to me, my family, they’re watching, they’re supporting and they’re living in the moment with me,” said Bottas.

“No doubt we’re lacking a bit of atmosphere — but it is what it is. Better to be racing like this than not racing at all.”

Leclerc, who grew up watching Ferraris race around his native Monaco, said it had been a strange weekend — and one that is set to continue with Formula One’s European races all likely to be without spectators.

“I actually look in the grandstands during the race. Obviously not today, because there was not much to look at, but yeah, I miss this.

“The podium, normally there’s cheers, people yelling, this time it was not that way, but it’s like this for now and it’s the best we can do.”