Seidl: Heading in the right direction but we’ve a way to go 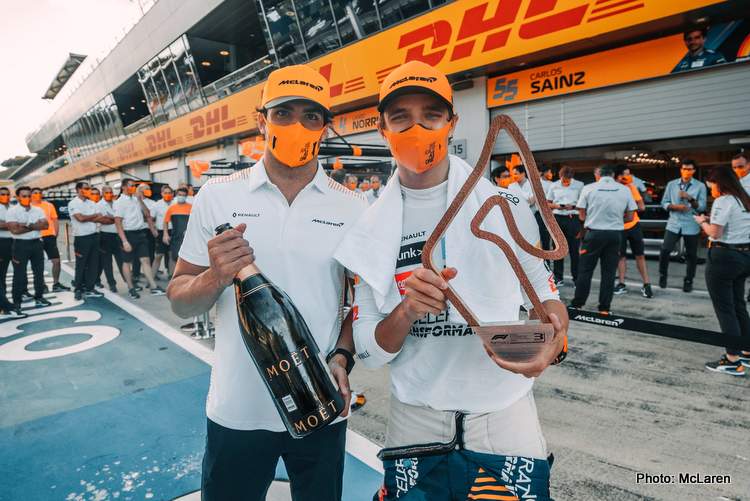 McLaren team principal Andres Seidl said it is difficult to know whether they would have beaten the Racing Point of Sergio Perez without the late safety cars.

Nine drivers retired from the opening race of the 2020 Formula 1 season in Austria and three safety cars were required, with McLaren’s Lando Norris able to benefit and secure a third-place finish as a result.

Norris and Charles Leclerc chose to pit from the hard tyre to fresh softer tyres after the safety car came onto the track for the second time, while Perez chose to stay on his worn medium tyres.

The Mexican was then passed by both drivers, with Leclerc taking a second-place finish and Norris earning his first-ever podium.

“Racing Point and us split the strategies at the first pit stop, they were on the medium tyres and we were on the hard, and it is always difficult to know if the medium would have worn down towards the end,” Seidl said.

“I think what was encouraging for us to see today was that after we had some doubts on Friday in terms of our long-run pace, we actually were even with Racing Point and the Ferraris, which is obviously very encouraging and gives us a lot of positivity looking ahead.

“James Key and his team also have some good updates in the pipeline in the coming weeks and months, so I think we have everything in our hands to fight for the best position in the midfield again.”

This is the second time in three races where McLaren have had a car on the podium, with Carlos Sainz achieving the feat during the penultimate race of the 2019 season at Interlagos, Brazil.

“A result like this weekend is confirmation that we are heading in the right direction, while also knowing we have a way to go,” Seidl added.