Honda: Three of our cars retiring is disappointing 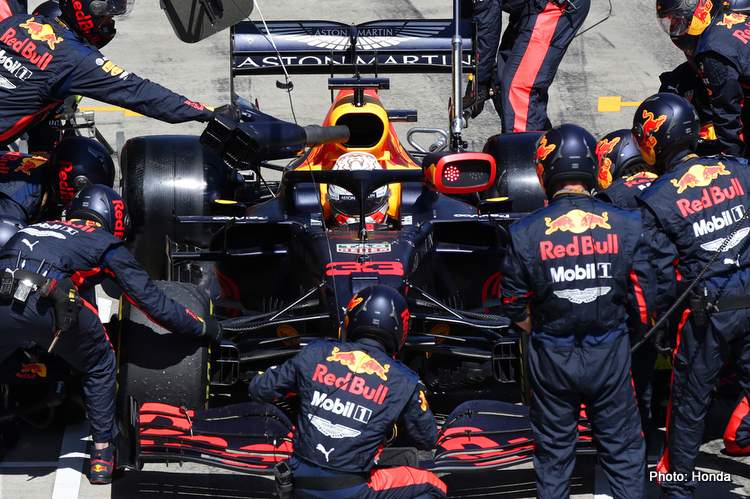 A thrilling Austrian Grand Prix sadly yielded just one car in the points between Aston Martin Red Bull Racing and Scuderia AlphaTauri, as the heat of the opening round saw a race of attrition.

Max and Alex both gained a position on the grid after Red Bull successfully got the stewards to reverse the decision from Saturday, which saw Lewis Hamilton drop from second to fifth. That meant Max was on the front row on medium tyres and Alex fourth on softs, while Pierre started from 12th and Daniil 13th.

Max got away well and was comfortable in second place, aiming to make the most of his tyre advantage as the only driver on the mediums in the top ten. However, an electrical issue saw him forced to retire on lap 14 after slowing on track, with the car coming back to the garage for investigations.

That saw Alex take up the mantle as he chased a maiden podium, and a late Safety Car when George Russell retired with engine problems saw Red Bull make an excellent strategic call. Alex switched to new soft tyres and immediately passed Sergio Perez for third place, before another Safety Car delay.

On the restart, Alex was on the verge of pulling a brilliant move around the outside of Hamilton for second place and looked favourite for victory but contact with the Mercedes spun him out of the points. Hamilton was handed a five-second time penalty for the incident, while Alex was later forced to retire on lap 67, with a different problem to the one that affected his team-mate.

Pierre and Daniil were both up into the points before Daniil was unfortunately the ninth retirement of the race, suffering a puncture on the pit straight with just over a lap remaining. In among all the action, Pierre managed to negotiate all of the incidents to finish a strong seventh, ending up just behind Sergio Perez and picking up six points to start the season.

We will now investigate what happened to the two Red Bull cars and prepare for another race in Austria next weekend.

Toyoharu Tanabe, Technical Director, Honda Racing F1: “The first race of the season ended with three of our cars retiring, which is disappointing. So the only positive is that Gasly drove well to give AlphaTauri some points in their first race.

At the moment, we are investigating the causes of the two failures. We stay here in Austria for the second round next weekend and in the limited time available we will analyse all our data and try and take countermeasures to ensure we perform more reliably in Round 2.”