Haas: We had overheating brake issues on both cars 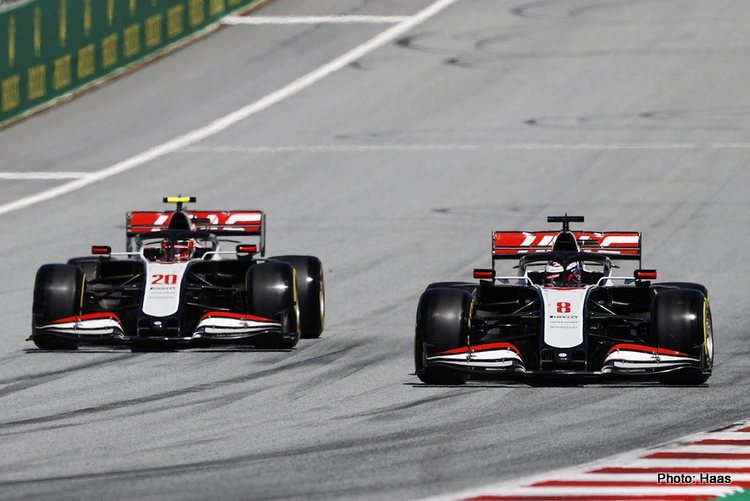 Magnussen started the race from 16th place on the Pirelli P Zero Yellow medium tires and gained positions across the opening lap to move into 13th spot. As a race of attrition developed at the Red Bull Ring Magnussen gained positions and was on the fringes of the top-10 when he unfortunately joined the list of retirements.

While battling with Esteban Ocon on lap 26 Magnussen’s VF-20 suffered a suspected brake issue on the approach to Turn 3, though thankfully stopped short of making contact with the barriers, and he was forced into retirement.

Grosjean began from 17th spot, also on the medium tires, and relinquished one position on the opening lap, but a wide moment through Turn 4 and a spin left him seeking fresh tires, and on lap 21 he came into the pits to take on a set of the hard rubber.

Grosjean emerged back on track and held 15th position but a second off-track excursion of the race at Turn 4, also as a result of brake issues, on lap 50 proved to be his final contribution to the race and he came into the garage to retire the car.

Formula One will stay on at the Red Bull Ring for another event, titled the Styrian Grand Prix, to take place across July 10-12, marking Round 2 of the 2020 championship.

Romain Grosjean: “The brakes went – we had been nursing them since lap one, looking after them. Obviously, something is not quite on the right level on the cooling, so we have to work and sort that out for next week. I think one of the main concerns is the pace, it was a very tricky car to drive today, especially in traffic. We’ll put our heads down and see what we can come up with. We need to come back next week with a better solution.”

Kevin Magnussen: “I was being told to do more and more lifting to save the brakes. By the end of it, I was just doing everything I could and still they blew up. That happened when (Esteban) Ocon launched an attack on me, I think he took the cooling and that was the moment they went. It was always right there on the limit. It wasn’t anticipated, it’s not like we knew we’d have big problems with the brakes. We knew we’d have to do some lift and coast for the brakes, but not all in that way. I might have had some debris in the ducts I guess. It’s a shame, we were P11, and if it hadn’t been for all that brake saving I might have had a decent pace.”

Guenther Steiner: “Obviously, it wasn’t the day we wanted today. We had brake issues because of overheating on both cars – it was the same thing. That’s what took us out of the race when there was a good possibility for us to get into the points. But ‘if and when’ didn’t work today. The good thing is, the drivers seemed to be as happy as they could be with the car. They feel that the car is raceable, so it just feels like we missed an opportunity. If we work hard, we can get into the points going forward, so that’s what we’ll be doing.”