Ferrari: A result that far exceeded our expectations 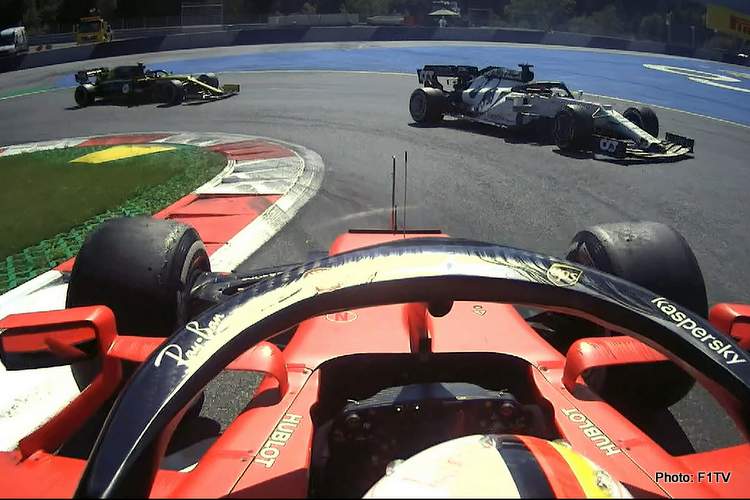 Formula 1 got back underway after the third-longest pause in the history of the sport and the Austrian Grand Prix did not disappoint, offering plenty of action.

By the end Scuderia Ferrari finished second with Charles Leclerc and tenth with Sebastian Vettel. Both drivers were on the attack in the final part of the race, pulling off several exciting overtaking moves.

An important day. This Sunday was an important one for Formula 1 and for sport in general, as this was the first truly global championship to restart after the Covid 19 pandemic, hence the message that flashed on the screens during the formation lap.

Before the start, drivers stood on the finish line wearing shirts with the words “End Racism” to underline Formula 1’s commitment to making a change for good in motorsport, via a series of initiatives under the hashtag #WeRaceAsOne.

This weekend, the Scuderia Ferrari SF1000 cars also carried the message #ForzaAlex in support of Alex Zanardi, the former racing driver and Paralympic champion, who is still in a Siena hospital following a recent handbike accident.

Opening laps. When the red lights went out, Charles stayed seventh, while Sebastian reacted well to get ahead of Daniel Ricciardo in the Renault. On lap 11, the Scuderia drivers moved up a place after Max Verstappen retired and four laps later, Vettel also passed Lance Stroll in the Racing Point to go eighth.

On lap 25, Kevin Magnussen went off with a brake problem on his Haas which brought out the Safety Car, so Charles and Seb pitted for the first time, taking on Hard tyres.

Lap 31. On lap 31, with the field bunched up at the restart, Vettel closed on Carlos Sainz in the McLaren and tried to attack him at turn 3. Unfortunately, they collided with Vettel coming off worst, spinning and dropping to the back of the field.

Another Safety Car. 20 laps later and the Safety Car was out again, this time after George Russell parked his Williams at the side of the track.

Sparks fly at the finish. In the closing laps Charles and Sebastian gave it their all. On lap 64, Charles managed to pass Norris on the outside of turns 4-5-6 and two laps later he got ahead of Perez in the Racing Point to be third. Just before that, Albon had spun off after a collision with Lewis Hamilton for which the Mercedes driver was given a five second penalty.

It meant that having crossed the line third, Charles was promoted to second and Sebastian, pushing very hard in the closing stages, managed to secure the final point for tenth place.

Stats. This was Charles Leclerc’s 11th F1 podium, after also finishing second last year at this track. For Scuderia Ferrari it was podium number 771, the 26th in the Austrian Grand Prix. For the first time ever in Formula 1, the teams will race in the same place for the next round.

Sunday 12 July sees everyone back on track in Spielberg for the first Formula 1 Styrian Grand Prix.

Charles Leclerc: “The team did a fantastic job, both in terms of strategy and with the car itself. We knew we had to make the best of it today. I told myself that we had to take any opportunity we had and that’s the way I drove. I am very happy with the result – we didn’t expect to finish in second place.

“While it was great to start off the season with a podium, we cannot ignore the fact that we aren’t where we want to be in terms of performance. We were lucky this weekend, with safety cars and retirements mixing things up, but we can’t expect to fight for the win at these next few races.

“We have to stay motivated and I am sure that the whole factory is working very hard to bring us back stronger. And that’s the spirit we need to remain focused on our targets.”

Sebastian Vettel: “It was a disappointing race for me, even if we knew beforehand it would be tough. I struggled for the entire race, already after the first two laps, just as I had done in quail.

“The balance and speed I had on Friday just slipped away from us and I was really struggling to keep the car on track. So now we have to try and find out why in the hope of doing better next weekend.”

Mattia Binotto, Team Principal: “A really busy weekend ended with a result that far exceeded our expectations going into this race, especially after the way qualifying went. Charles drove an amazing race, fighting like a lion from the first to the last lap and making the most of every opportunity that came his way.

“Today’s second place is mainly down to him. At least Sebastian managed to get back in the points, but he struggled more than his team-mate with the balance of the car and now we have to work out why and in time for next weekend.

“The 19 points we picked up here in Spielberg were also down to reliability, which is always vital, as well as the work the team has done here at the track and back in Maranello over this past week. However, it does not make up for the fact that, in pure performance terms, we are behind, more than we could legitimately have expected.

“That’s why we are pushing as hard as we can to bring updates to the car as soon as possible, although we know that no package can be a magic wand that radically changes the hierarchy among the teams.

“Having said that, we have seen in this first race that a few tenths more or less can make a big difference in terms of grid position, so we must leave no stone unturned.”