Mercedes driver Valtteri Bottas put in a steady shift out-front while excitement abounded behind him to win the Austrian Grand Prix on Sunday, the first race of the 2020 Formula 1 World Championship season at Red Bull Ring.

Backing-up his pole position from Saturday, the Finn led throughout the afternoon, with Ferrari’s Charles Leclerc and McLaren’s Lando Norris making-up the podium spots after a chaotic final act to the race.

The Finn said after the race, “That was definitely quite a bit of pressure on through the race one safety car was still ok with the last one I was like ‘come on’ there were so many chances for Lewis to come through if made a small mistake.

“I managed to keep it together and control the race from my side and it’s a good start to the season. We had to manage the car quite a lot so we couldn’t use all the kerbs but I’m glad all the cars managed to finish, and the team standings we are leading so that’s a very good start.”

Indeed, a safety-car restart with ten laps to go made it look like anyone of Bottas, his Mercedes teammate Lewis Hamilton or Red Bull’s Alexander Albon could have won the race, but the latter two didn’t even make it to the podium after an unfortunate coming-together.

Shod with soft tyres to the two Mercs’ hards, Albon quickly closed on Hamilton before trying to pass him around the outside of turn four.

Holding the inside line, Hamilton collided with Albon as he exited the corner, forcing the Thai into retirement and earning himself a five-second penalty which Leclerc and Norris – with his first career podium – took full advantage of.

Leclerc was clearly pleased how the afternoon panned out for him, “It was a huge surprise but a good one. We did everything perfect today, had a bit of luck with Lewis’ penalty and a few crashes here and there but that’s part of the race too.

“We just wanted to to take every opportunity to find the pace to finish where we were. There’s still a lot of work to do but anything is possible. We will work as a team and we can come back strong. I wanted to be very aggressive, every safety car into Turn 1-3 there was no opportunity here, but I knew my opportunity.”

Norris – the youngest ever British driver to finish on an F1 podium – was more than surprised, while his team boss Zak Brown was high-fiving his way to the podium with the broad grin evident under the orange face-mask.

Norris told MC Jenson Button, “There’s a few moments where I thought I fudged it. I dropped to fifth with a few laps to go and Carlos nearly passed me and I managed to get back past Checo and I ended up on the podium. It was a good race, a hard last few laps to push as hard as I can.

And while Hamilton-Albon saw the most costly retirement of the race, it was far from the only one. Nine of the 20 drivers failed to make the finish, with the casualties quickly racking-up as the unforgiving nature of the Red Bull Ring took its toll.

First to go was Albon’s teammate Max Verstappen, with a suspected electrical issue bringing his race to an end on lap 11.

Renault’s Daniel Ricciardo and Racing Point’s Lance Stroll followed soon thereafter, after which Haas’ Kevin Magnussen joined the party by spinning into the barriers on lap 26, bringing out the first safety car of the afternoon.

Upon the restart Sebastian Vettel almost immediately clashed with his Ferrari successor Carlos Sainz, both cars getting away relatively unscathed but the German forced to start again from the back of the field.

The next crisis befell the front-running Mercedes, with both drivers told to keep off the kerbs due to a gearbox issue, although their lead remained secure for the moment.

Haas then became the first team to suffer a double-DNF, with Romain Grosjean unable to keep his car on-track due to a suspected brake issue.

George Russell, who was running 13th at that point, brought out the second safety car of the afternoon when he was forced to pull to the side of the track, allowing Albon to make his switch onto softs.

Resuming with 17 laps to go, the restart proved short-lived when the front-right tyre of Kimi Raikkonen’s Alfa Romeo came off, putting the Finn into the pit wall.

After the third-and-final restart and the aforementioned coming-together between Albon and Hamilton, Daniil Kvyat became the final retirement with a tyre failure.

As a result, the final top ten was nothing short of eclectic, even outside the podium places.

After his penalty Hamilton was fourth, while Norris’ teammate Carlos Sainz managed to jump ahead of Racing Point’s Sergio Perez due to the Mexican receiving his own five second penalty.

Pierre Gasly was seventh for AlphaTauri, ahead of Esteban Ocon in eighth, the latter scored his first points in his first race back in F1.

Antonio Giovinazzi was ninth thanks despite driving an Alfa Romeo that lacked pace throughout the weekend, while Vettel snagged the final point in a race that did nothing to prove his detractors wrong.

Williams’ Nicholas Latifi was 11th and last of the cars still running at the flag, albeit nearly four seconds behind the top-ten. 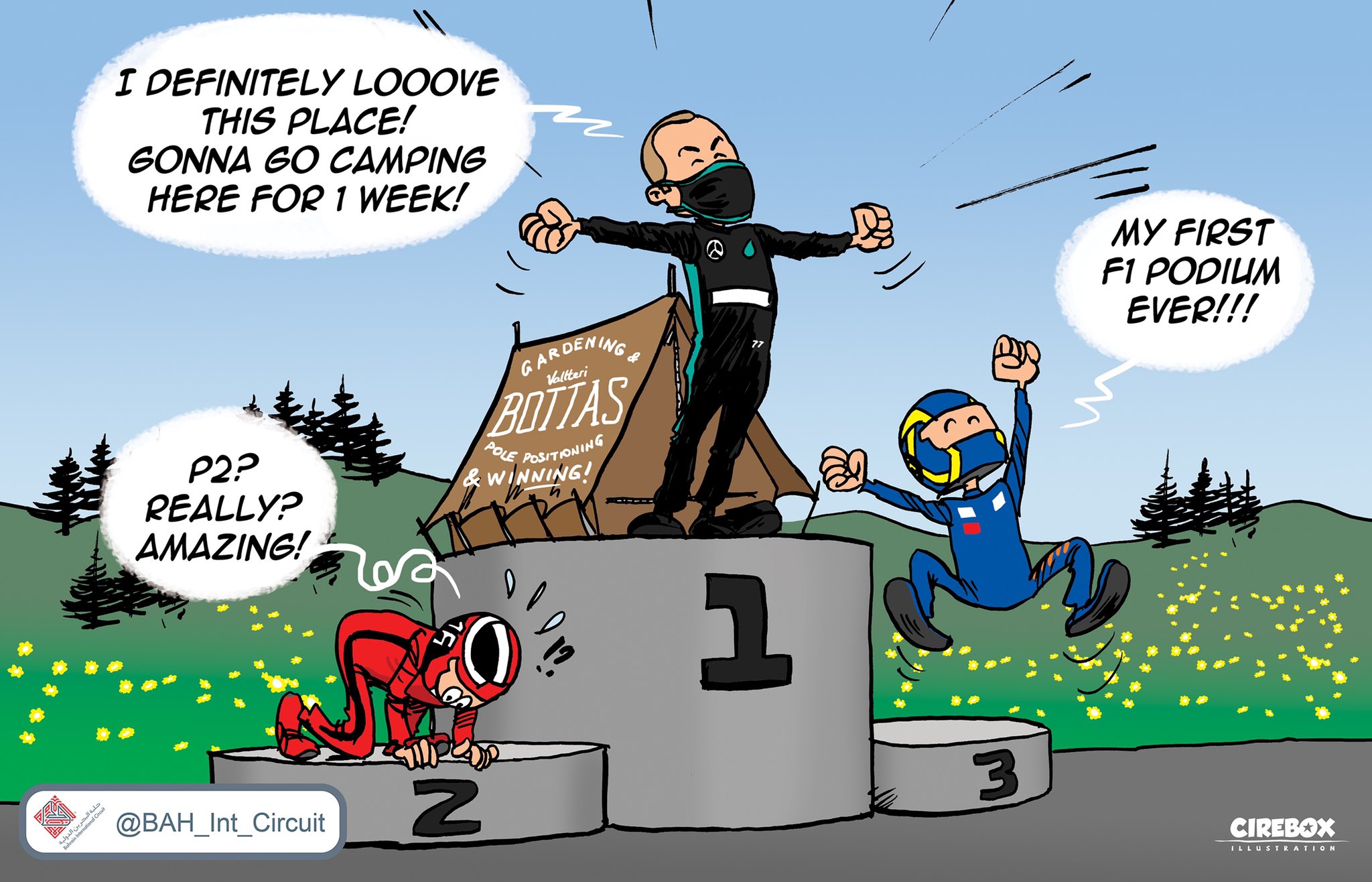 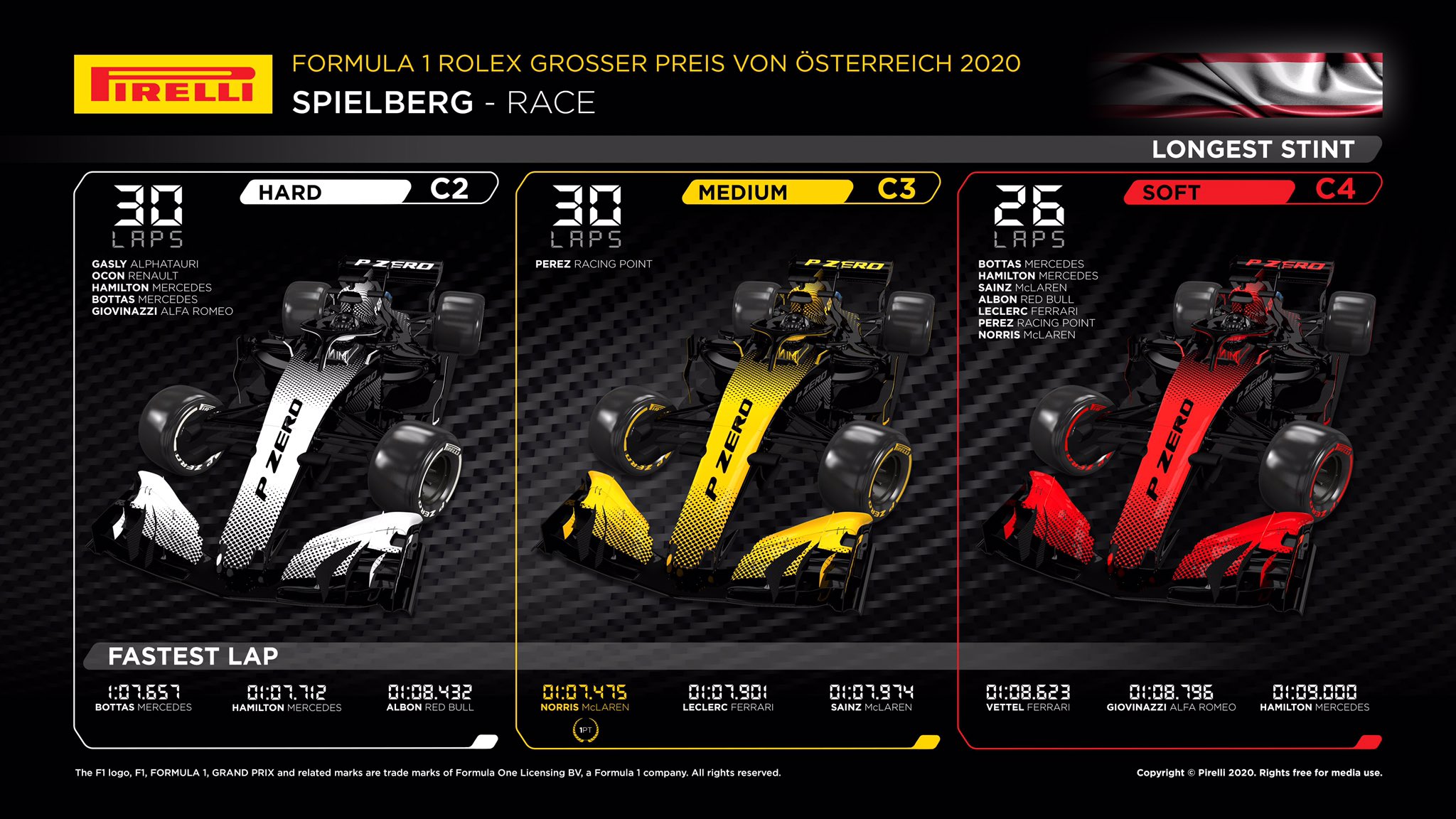 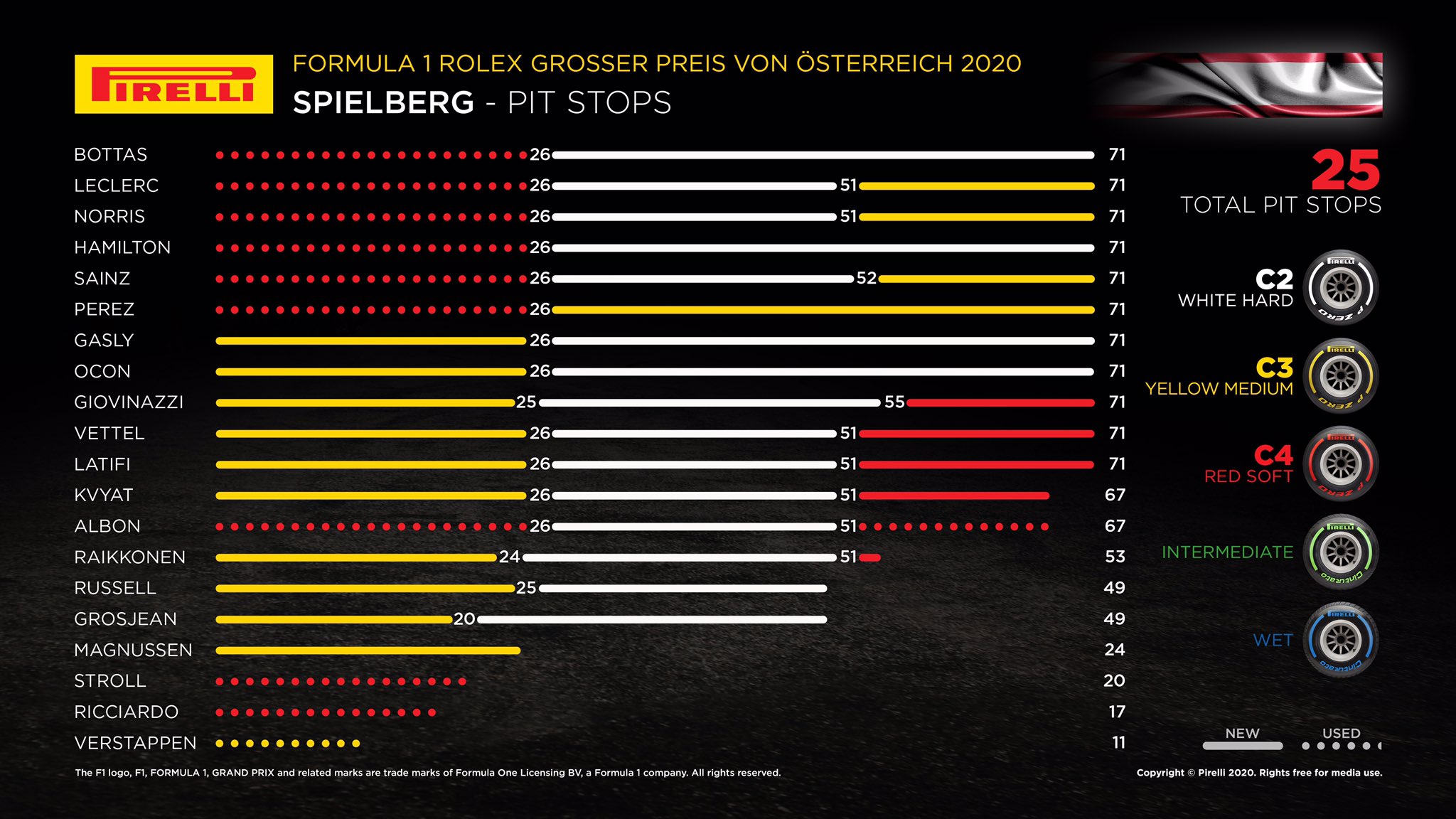