AlphaTauri: We have work to do with our package 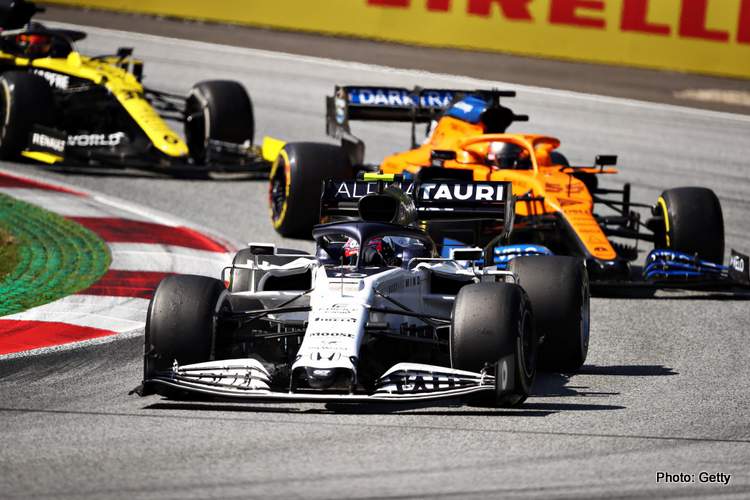 AlphaTauri report from the Austrian Grand Prix, Round 1 of the 2020 Formula 1 World Championship at Red Bull Ring.

Pierre Gasly scored points with seventh place, while a puncture relegated Daniil Kvyat to 12th in what was a race of high attrition in Spielberg.

Pierre Gasly: “It felt amazing to get back racing after such a long break and I think we started the season with a really exciting race. If someone had told us that we would have been P7 on Sunday we would have signed straight away, so I think we can be very happy with my result after a difficult start to the weekend.

“We knew the race was going to be a challenge because the Renaults, McLarens and Racing Points are very strong, but I had some good fights on track and managed to stay out of trouble until the end. It was a really good one for us today!”

Daniil Kvyat: “The race was going really well for me until the contact with Ocon, I had a very good pace and fresher tyres. After the collision, my front wing and a suspension broke, I also had a puncture, so my race was over. This moment cost me a lot of points today, so it’s a real shame and very disappointing to finish the day like this. Today it could have been a very strong race for me.”

Jody Egginton, Technical Director: “What an afternoon. Today’s race has been very action-packed and full of incidents. We have come away with some good points with one car, with the other car having the opportunity for a similar result but was not able to execute on this occasion.

“The entire team trackside and back at base performed really well today and the result is a credit to all of them. We have some work to do with our package to move it forward, but we have a good base car and there are some developments on the way, so are looking forwards to the next races. Overall, it’s been a good start to our life as Scuderia AlphaTauri in Austria.”

Franz Tost, Team Principal: “First of all, I want to send a big thank you to Red Bull for making it possible to start the season here at the Red Bull Ring, a fantastic location in the Styrian region. We were also very lucky as we had good weather all weekend. Generally speaking, today’s race was very exciting with the deployment of quite a few safety cars which have helped the show.

“Pierre’s seventh-place finish was the best possible result we could have achieved, also considering that we started in 12th and 13th position on the grid. Both drivers did a really good job, together with the team, who operated very well and took the right decisions strategy-wise.

“Daniil could also have scored points today, but the collision with Ocon compromised his race due to a suspension failure, which we need to investigate now. The progress showed by the team, with steps forward in the general setup and relative performance from Friday’s sessions to the race, makes us look forward to next week’s Styrian Grand Prix, where we hope to be able to replicate today’s result or achieve an even better one.”