Vettel: Our car not quick enough and balance not ideal 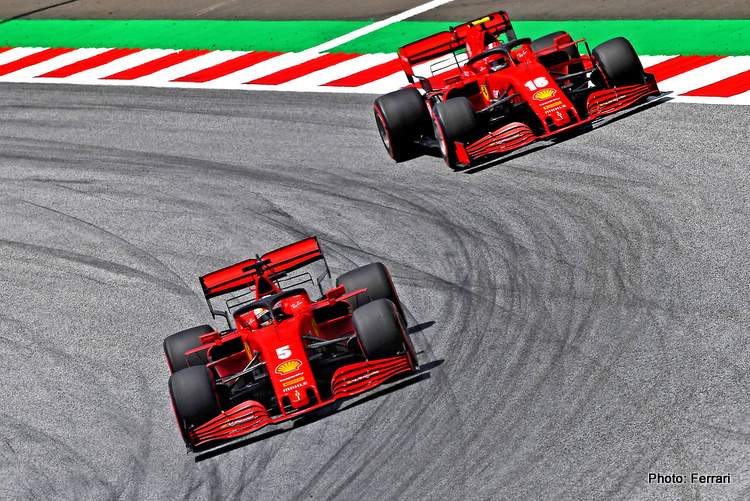 There surely was a simultaneous, jaw-dropping moment around the globe as Sebastian Vettel failed to make the cut out of Q2 during qualifying for the 2020 Austrian Grand Prix, the German bettered fractionally by his teammate Charles Leclerc in the sister car will start the race from 11th on the grid.

Ferrari warned they had something of a brick for the Red Bull Ring season opening party, however, the eternal optimists among F1 fans suspected that the Reds were talking down their chances and would pull the ‘prancing-horse-out-the-hat’ when it mattered, but not even a rabbit appeared.

Clearly the result ambushed the Red collective as well, Vettel saying as much in the interview pen ahead of his early shower, “Of course it’s a surprise!

“We thought we had a little bit more in hand but it seems the others were probably running a little bit more fuel or were more conservative in practice. I wasn’t so happy with the car, more oversteer in entry than I would like.

“But we will see, I think tomorrow is a different picture. It’s a long race, I think in race trim we are always better and we will try to make some good ground and score some good points.”

Vettel departs Ferrari at the end of this season, but will be looking to end his tenure at Maranello on a high and perhaps send out a message to his detractors.

However, Saturday in Speilberg was clearly not on the German’s script, “I didn’t feel so confident with the car towards the end of the session, but the race is tomorrow and that’s the part of the weekend we look forward to the most. So, we will see what we can learn from today to improve for tomorrow.

“Our car was not quick enough and the balance was not ideal. I think we were losing a bit on the straights with too much drag, but in some corners we are very competitive.

“For sure we would have liked to be faster, but P11 puts us in a good spot for the race, with a free tyre choice allowing us to do something different with the strategy, which could be important as it is meant to be much hotter tomorrow.

“It’s not ideal and I am not fully happy and we clearly did not have as much in hand as the others, but our race pace should be more competitive,” added Vettel who has 53 grand prix wins to his name but has never won at Red Bull Ring, home track of the team that he steered to four F1 world titles.