Red Bull: Mercedes dominant but also a positive start for us 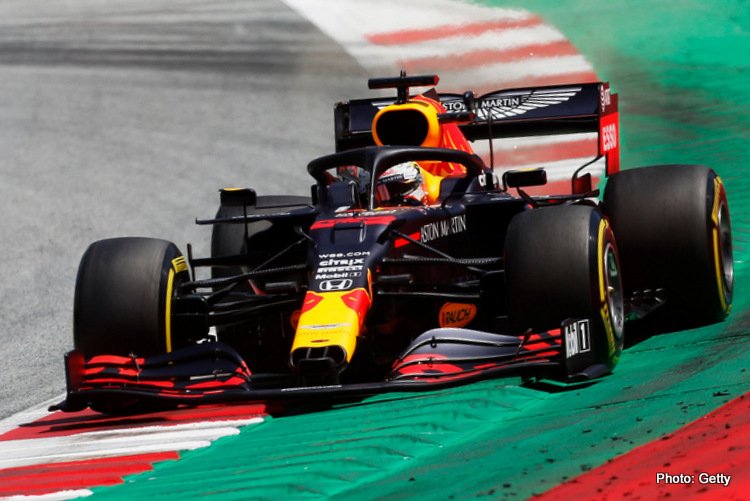 One might have expected more from Red Bull in qualifying for their home Austrian Grand Prix and, although, Max Verstappen qualified third the facts are that the pacesetters had half a second in their pocket when the chips were down in Q3.

Nevertheless, a shrewd decision to run the harder tyre in Q2, meaning its the tyre he starts on while all the heavy hitters will be on softs, its a bold call but considering he’s starting from third it might well work in their favour.

After all, Max won in 2018 and 2019, neither time did he start from pole and now a hat-trick beckons and they will be calling for more of the same in the Blue camp.

Alex Alboin was four-tenths shy of his teammate, and will line-up fifth on the grid behind his teammate.

Max Verstappen: “I think third on the grid is a good start, of course I would have liked to fight for pole position but that wasn’t possible today. On a single lap around this track we have never been the strongest but there are things we can for sure improve moving into qualifying next weekend. Tomorrow is a different day and we have a different strategy starting on the medium tyres compared to everyone else around us on the soft. It’s going to be warmer as well so hopefully that will also work to our advantage. That doesn’t mean that Mercedes are going to be slow, but hopefully it will close the gap a little bit. First we need to have a good start as I don’t want to do the same as last year and then we will do everything we can to fight for the win. It’s a shame that the fans are not here at our home track as they really help to make a good atmosphere but we’ll try to make it an exciting race for everyone watching on TV.”

Alex Albon: “It feels good to be back in a qualifying session and I enjoyed it, but I’m not overly happy with my result. I struggled a bit at the beginning but by the end I was ok. We just weren’t able to maximise it today. On the first run in Q3 I was too far behind the pack and although it’s not Monza, it’s similar here in that a slipstream is worth a good chunk of time, but there was some time in my driving too. On my second Q3 run we got yellow flags after Bottas went off so that wasn’t ideal but P5 on the grid isn’t too bad and let’s see how our race pace is tomorrow.”

Christian Horner, Team Principal: “Mercedes gave a dominant performance today, but it was also a positive start for us, with Max qualifying in P3 and Alex in P5. We made a brave strategy decision resulting in Max being the only driver in the top ten to start on the medium tyre, which provides us with many strategic options for the race. The temperatures are also due to increase tomorrow which helped us take the win last year so that gives us confidence to take the fight to Mercedes. The entire Team are excited to be back racing and it couldn’t be better starting the season at our home track. Let’s see what tomorrow brings but it is shaping up to be a great race.”