Mercedes: Very satisfying to see chassis and PU are working so well 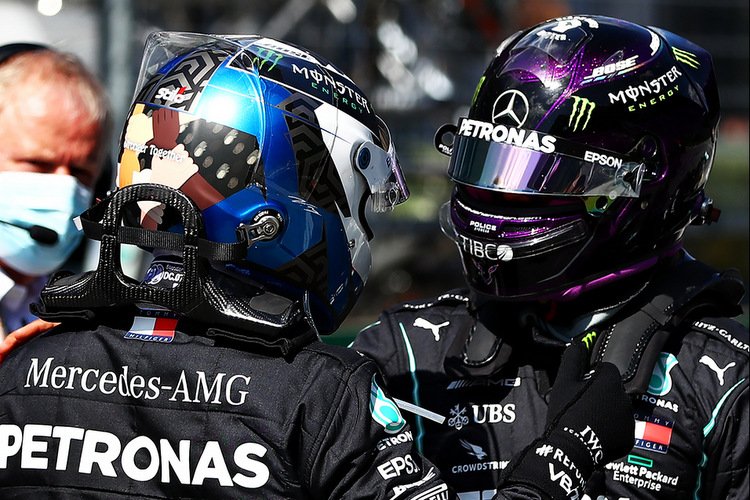 We said on Friday it was business as usual for Mercedes, and today we can add same old story as the Silver Arrows turned Black Arrows dominated qualifying with the only surprise being Valtteri Bottas edging his teammate for pole.

Other than that, the F1 world champions were again untroubled, while their rivals are talking up their own race pace as if Mercedes does not have huge reserves of that too. It is early days but the evidence is that they have themselves another title-winning weapon without match and round one is theirs to lose.

This is what they say at the end of the day at Red Bull Ring.

Valtteri Bottas: “This feels really good. I missed this feeling – I was shaking after qualifying. It’s something really special to be able to push the car to its limits. We’ve been preparing for this for such a long time now and you never now where you really stand. But our team did such an amazing job, it’s very impressive to see. It’s still very early days, this was only the very first qualifying session of the season, but I’m so impressed by what our team has been able to achieve. A big thank you to everyone in the team, both here at the track and back home at the factories – this is a truly amazing car to drive. I’m very happy with the result today, but it’s tomorrow that counts, so we need to keep our heads down and keep working hard.”

Lewis Hamilton: “Great job by Valtteri today and a great start to the season overall for the team. On my last lap in Q3, there was a big puff of dust when I came out in Turn 4 and at first, I didn’t know where the car was that had gotten off the track. But then I managed to see that Valtteri was just about to come back on the track and so fortunately it didn’t really affect my lap; in the end, he kept his position and so did I. This team shows year on year of what it is capable of; we continue to set new standards. I think it’s because we’re open-minded, we’re current with the times. We’re always learning from each other and we’re always pushing the boundaries together. We’re united as a team, there aren’t really any politics within this group, and we push together. I think that’s why we’ve come back strong again this year. Now we need to show that strength again tomorrow in the race.”

Toto Wolff: “I’m extremely happy with this front-row lockout for the first race of the season. The team and the car – both Power Unit and chassis – worked really well today. Now it’s about bringing that result home tomorrow which will be very challenging. It may not look that difficult based on today’s single lap results, but Verstappen’s offset tyre strategy was clever as he will be able to go much longer on the Medium tyres in the race. We considered the offset strategy as well; but there’s a risk to lose time at the start. We think a one-stop strategy can work here nonetheless, so then the harder tyre isn’t necessarily an advantage. Given that Verstappen was lacking a little bit of single lap pace, going out in Q2 on the Mediums was the right thing to do. The temperatures are forecasted to be much higher tomorrow which will add to the challenge. We hope for strong reliability tomorrow and that our pace is good enough to be in front. I’m looking forward to the fight.”

Andrew Shovlin: “A really great result for the whole Mercedes team and it’s very satisfying to see that the chassis and Power Unit are working so well on a track that has caused us some headaches in the past. The day hasn’t been completely straightforward; we had a pretty good FP3 session but had to pull Valtteri’s car apart before qualifying to replace an electrical loom in the gearbox. It’s always a bit unsettling when the car is in pieces running up to qualifying, but the mechanics did a great job preparing it and we were ready to run at the start. It’s hard to find a decent gap in the first session here in Austria, as there are twenty cars all trying to do the same on a very short lap. The second and third sessions were a bit easier to manage and the pace in the final session was good. This is normally a circuit that compresses the field so it’s great to start from the front. It’s going to be an interesting race tomorrow. The track and ambient temperatures are much higher than on Friday which will make life harder for the tyres. We’ve also got Max starting on the Medium compounds which will go a bit further than our Softs, but in terms of pace, we’ve not seen much difference between the tyres.”