Haas: Half of the mission was accomplished 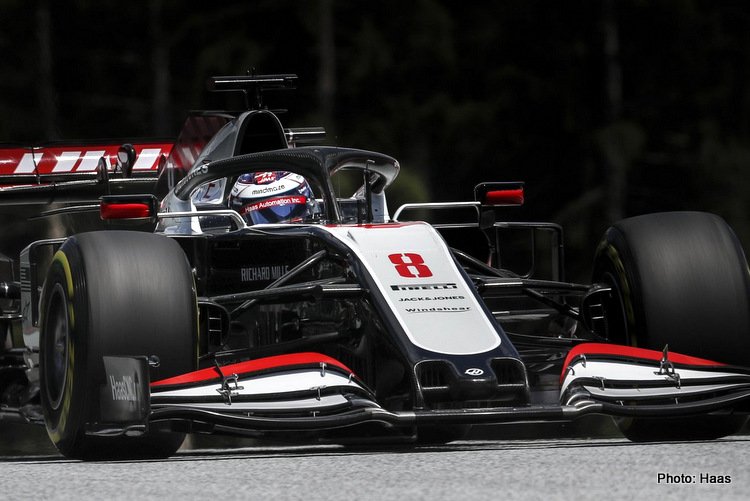 The Q1 run-plan consisted of two timed stints for Grosjean and Magnussen utilizing the Pirelli P Zero Red soft tires throughout. Grosjean’s first stint delivered a 1:05.975 which he then bettered on his second set of tires to advance to Q2 courtesy of a 1:05.094 – good for 15th on the timesheet.

Q2 saw Grosjean produce a best lap of 1:04.691 on his final run to qualify 15th overall with only the top-10 in the session progressing to Q3.

Valtteri Bottas claimed the pole position for the Austrian Grand Prix, the eighth career Formula One pole for the Finnish racer. His Q3 fast lap of 1:02.939 beat

Romain Grosjean: “We knew going into the session that our qualifying pace wasn’t as good as we’d hoped for, but it’s somewhere in line with what we saw from pre-season testing. The positive is that the race pace seems to be better than qualifying, so I’m obviously hopeful that tomorrow we can be fighting and have some fun. There’s clearly work to be done on the car to enable us to go faster, but we’ve seen some encouraging things too. We’ll keep working, put our heads down, and we’ll see how we go.”

Kevin Magnussen: “We haven’t qualified where we thought we would be. I had slightly higher hopes, and I know the team had. It’s a bit disappointing to find ourselves out in Q1 but that was the pace we had. P16 is obviously not fantastic. I did my best, I felt like I did a decent lap, but it’s tricky to be out already. At the moment it looks like the other teams have found more than we have. I know we’ve been working to improve our car. We’ll continue to work hard on that but for now our focus is on tomorrow. Our race pace yesterday didn’t look terrible in comparison to our qualifying pace. We definitely need a bit more; we need to find it. I’m hopeful and I’m going to be doing my best to get something out of the race.”

Guenther Steiner, Team Principal: “Following the first free practices of the season, I think we were somewhat prepared for this. Our aim was to get out of Q1 and into Q2. We did it with one car, so half of the mission was accomplished. We’ve got more work to do to get more out of the car. Everybody has worked very hard after four months of shutdown, and not an easy shutdown for people. Everybody is very motivated though, and we’ve just got to deal with what we’ve got now and try to get better. We obviously need to wait for tomorrow to find our real race pace. We’re looking forward to at least being better than last year, as back then we were afraid of going racing – on a normal day we just fell back. Our race pace in Friday practice was decent. The proof is in the pudding, and the pudding is being served tomorrow.”