Ferrari: That was a disappointing qualifying session 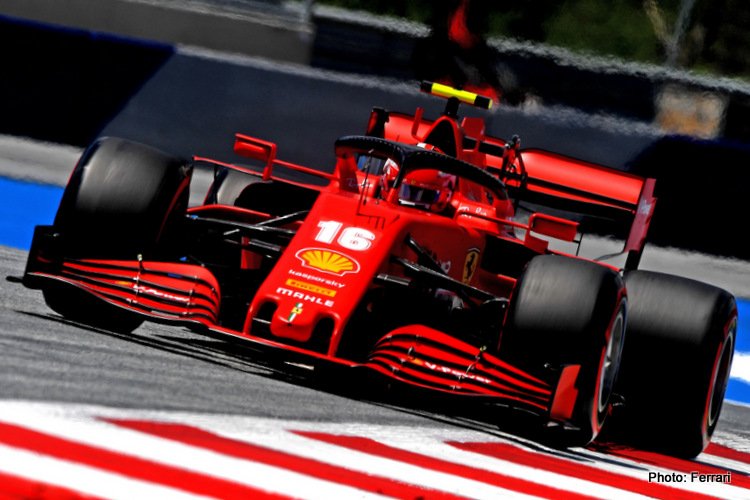 Even before taking to the track, Scuderia Ferrari was aware that it would not have an easy time of it at the Austrian Grand Prix.

This afternoon’s qualifying confirmed that and produced a scenario that was even more complex than one could have expected, with around ten cars fighting down to the thousandth of a second for grid places from the third to the seventh row.

This was compounded by the very short lap length. Charles Leclerc managed to get through to the final part of qualifying and was seventh fastest to start from row four. Sebastian Vettel had a more difficult time of it and got no further than Q2, having to settle for eleventh place on the sixth row of the grid for tomorrow’s race that gets underway at 15.10 CET.

Q1. When qualifying began at 3pm, the track temperature was 53 and the air 27. Both drivers began on the Soft tyre: Sebastian did a 1’04”554 which was good enough for the next phase. Charles was a few tenths slower and so to avoid the risk of being eliminated, he pitted for a new set of tyres, with which he comfortably got to Q2 with a time of 1’04”500.

Q2. In the second phase, Charles and Sebastian found themselves fighting with around ten drivers all of whose times were very close. Charles first run was a 1’04”057 while Sebastian did a 1’04”331. The two drivers then pitted for a new set of Softs as the track seemed to improve. Both of them managed to improve, but while the Monegasque got into Q3 with a 1’04”041, the German’s time of 1’04”206 meant he was just outside the top ten so that he starts from eleventh on the grid.

Q3. In the part that decides the top five rows of the grid, Charles first went out on used Softs, making a small mistake at the first corner on his way to a time of 1’04”539. He came in for his last set of new Softs to post a good 1’03”932, which saw him in sixth place almost to the very end, until he was pushed back to the fourth row. It’s not all bad as it means he gets to start from the clean side of the track. It will be a tough race tomorrow in which being patient and not making mistakes will be key.

Charles Leclerc: “Seventh place is the best we could do today. Of course it’s not where we want to be but we are just not quick enough, so we need to work hard and try to catch up. There’s still a bit of performance we can get here and there and we need to put everything together, getting the best out of the package we have, because for now it’s all we’ve got. The smallest detail is very important as everyone is very close now.
It was a difficult day but at least now we know where we are. As a team all we can do is cheer up and find the positive in all of this, even though it’s not easy. We need to work all together in a constructive way and try to do the best job possible to improve things in the next few races. We should keep our moral up and be motivated and just work to improve. This is the way forward to get out of these hard times. The balance of the car is quite good but it’s the overall performance which is still not good enough.
As for the race, anything can happen and having a good strategy with the right tyre management, maybe we can score some good points.” quote

Sebastian Vettel: “I didn’t feel so confident with the car towards the end of the session, but the race is tomorrow and that’s the part of the weekend we look forward to the most. So, we will see what we can learn from today to improve for tomorrow. Our car was not quick enough and the balance was not ideal. I think we were losing a bit on the straights with too much drag, but in some corners we are very competitive.
For sure we would have liked to be faster, but P11 puts us in a good spot for the race, with a free tyre choice allowing us to do something different with the strategy, which could be important as it is meant to be much hotter tomorrow. It’s not ideal and I am not fully happy and we clearly did not have as much in hand as the others, but our race pace should be more competitive.” quote

Mattia Binotto Team Principal: “There’s no point denying that was a disappointing qualifying session. We knew the start of the season would be difficult for us and today’s result certainly confirmed that to be the case, even more so than we had expected.

“We have to analyse very carefully every aspect of our performance and compare it to the opposition, trying to understand why there is this gap. Now, we will prepare as well as possible for tomorrow’s race, which will be tough with plenty of unknown factors, more so than usual, it being the first of this strange season.

“We will carry out our tasks to the best of our ability, trying to get everything out of the package we have here. It’s pointless to predict where we might finish and we must just try and score as many points as possible.

“At least Saturday in Spielberg has ended on a positive note for us as three of our Ferrari Driver Academy drivers made a clean sweep of the podium places in the first Formula 2 race of the season.

Congratulations to Callum Ilott on taking his first win in this very competitive category and well done to second and third-placed Marcus Armstrong and Robert Shwartzman, both of them on their F2 debut.

Giuliano Alesi did well to fight his way up the order to sixth and Mick Schumacher was also a contender, in the battle for the win for two-thirds of the race.