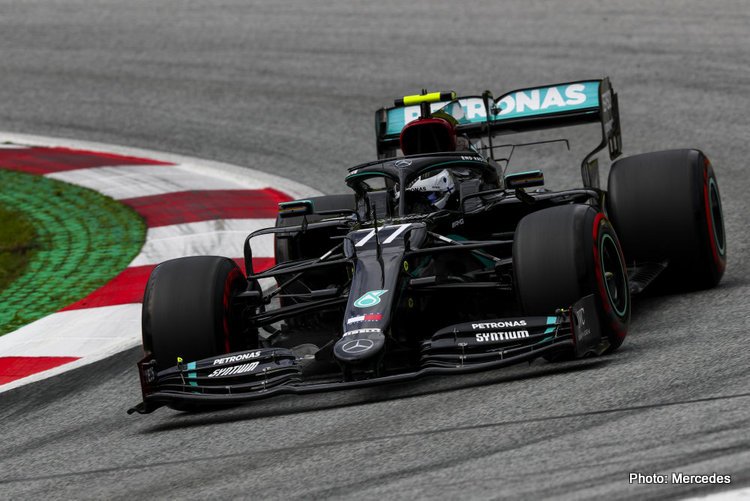 The sight off-track might have been alien with no fans, but the sight on-track was a familiar one with Valtteri Bottas and Mercedes on-top on Saturday and claiming pole position for the Austrian Grand Prix tomorrow.

His third pole in Austria and 12th of his career, Bottas topped the timesheets with a 1:02.939 to get his 2020 Formula 1 season off to the best possible start.

Setting his time with his first run in Q3, the Finn kept his lead despite a trip through the gravel in his second run, his teammate Lewis Hamilton still 0.012 seconds behind, despite improving in his own final effort.

Bottas said afterwards, “It feels really good, I’ve missed this feeling, I’ve obviously been preparing for this for a long time and it feels so good. Our team have done an amazing job, we seem to be in our own league. I’m so impressed. It’s truly an amazing car to drive.”

Teammate Hamilton gave the pole winner a congratulatory hug, before adding, “Great job by Valtteri, this is a great start to the season. I think we show year on year that we continue to be the best team, we’re constantly pushing the boundaries and there’s not really any politics within the team. That’s why every year we come back.”

Emphasizing the gap between Mercedes and the rest of the field, Red Bull’s Max Verstappen was third with a time 0.538s off the pole, but he will be reasonably pleased given he is the only top-10 driver starting tomorrow’s race on medium tyres.

The Dutchman said, “I’m happy to be P3. We have different starting tyres so it’s going to be interesting. But clearly today Mercedes were on a different level, unfortunately. I expect we are a bit better in the race. I’m the only one on a different tyre, I’m looking forward to it and we have nothing to lose. I’ll try to make it as difficult as possible for them.”

As to Mercedes’ main rivals in 2019, Ferrari, Saturday only reinforced that their 2020 car remains a serious work-in-progress, with Charles Leclerc 0.984s off the lead in seventh, and Sebastian Vettel narrowly edged out of the top 10 in what the German admitted was a “surprise” for him.

In their stead, McLaren’s Lando Norris was the prime beneficiary, his 1:03.626 good enough for a career-best P4, ahead of both Alexander Albon and Sergio Perez, who were in a dead heat 0.242s behind the young Briton.

After the aforementioned Leclerc, Carlos Sainz was the first driver outside a second off the lead in P8, with Lance Stroll 0.058s behind him.

Renault’s Daniel Ricciardo rounded out the top 10 with a 1:04.239, albeit his final lap having to be aborted after Bottas’ off brought out a yellow flag.

Further afield, Pierre Gasly and Daniil Kvyat were 12th and 13th for AlphaTauri, with Esteban Ocon and Haas’ Romain Grosjean rounding out the Q2-runners.

Grosjean’s teammate Kevin Magnussen was 16th, ahead of George Russell by just 0.003s in the Williams, with the Alfa Romeo pairing of Antonio Giovinazzi and Kimi Raikkonen right behind.

Nicholas Latifi once again struggled, 0.533s off the next-closest runner in last.