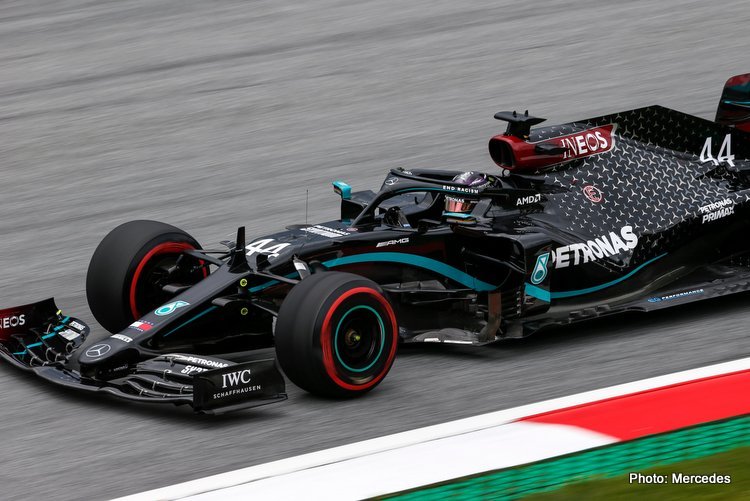 Mercedes’ Lewis Hamilton and Valtteri Bottas made it a third-straight practice 1-2, while Max Verstappen managed to significantly close the gap in the final session of practice in Austria on Saturday.

As they had in both sessions on Friday, Hamilton led Bottas, the former’s best effort a 1:04.130, with the latter a further 0.147 seconds back.

Evidently, Mercedes are the team to beat heading into qualifying at the Red Bull Ring, but those Formula 1 fans looking for something other than pure Mercedes domination were given some hope by Verstappen’s performance, with his best lap in the Red Bull just 0.283s off the lead.

Continuing his strong showing from yesterday, Sergio Perez was fourth for Racing Point with a best time of 1:04.605.

Charles Leclerc was fifth for Ferrari, 0.573s behind Hamilton’s best time, further indicating the Scuderia does not have the pace to match the front runners.

Alexander Albon finished P6, showing some decent improvement on his pace yesterday, albeit with the caveat he still has a ways to go to catch his Red Bull teammate.

Sebastian Vettel endured a particularly discouraging session, only managing a best time of 1:04.851, which was much closer to P8 Lance Stroll in the ‘Pink Mercedes’ than Hamilton and Bottas in the real ones.

Pierre Gasly, Lando Norris, Esteban Ocon, Daniel Ricciardo and Carlos Sainz were ninth-through-13th, with only 0.228s separating the five of them in what promises to be a tight midfield battle.

Daniil Kvyat was 14th in the second AlphaTauri, 0.341s behind his AlphaTauri teammate Gasly.

George Russell managed to sandwich himself between the Haas’ of Romain Grosjean and Kevin Magnussen, who finished 15th and 17th respectively.

In 18th and 19th were the Alfa Romeos of Antonio Giovinazzi and Kimi Raikkonen, who seemingly could push title-holders Williams for the slowest car on track.

Bringing up the rear was Nicholas Latifi, who seems to have a severe case of rookie blues here in Austria. After a less-than-impressive showing on Friday, here he brought-out the first red flag of the 2020 season when he spun his car into the wall at turn one. 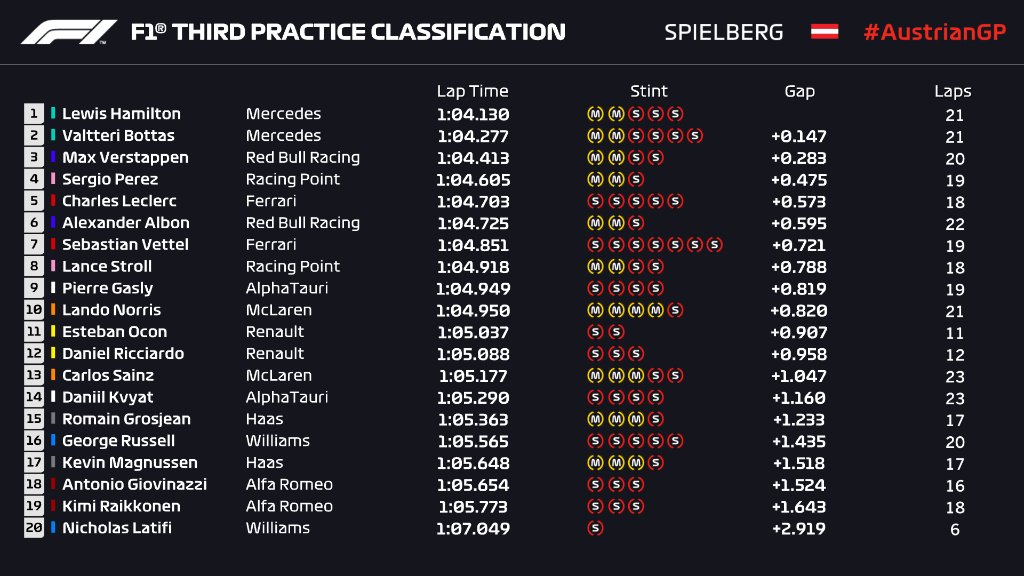