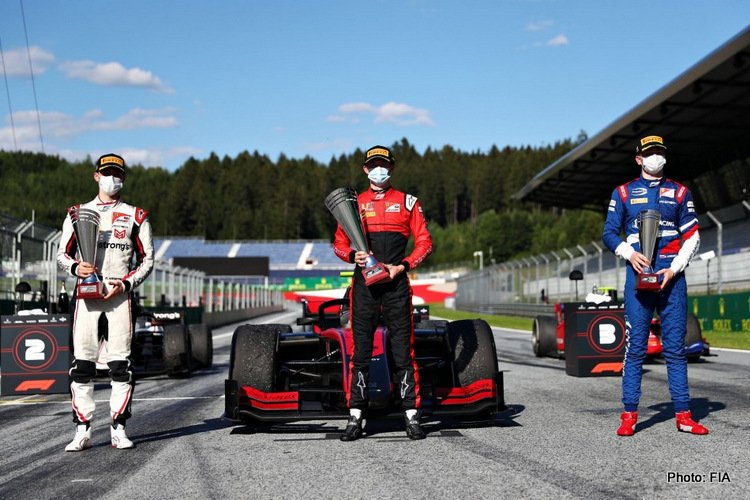 Callum Ilott steered clear of trouble to seal his maiden FIA Formula 2 win in a dramatic first race of the season. The UNI-Virtuosi racer was joined in the top three by fellow Ferrari juniors Marcus Armstrong and Robert Shwarztman, with the duo taking podiums in their F2 debuts.

Ilott spent the majority of the race in a dogfight with teammate Guanyu Zhou and fellow Ferrari Academy member Mick Schumacher, but saw the duo plummet to the back of the grid late on. Both would finish out of the points as Zhou suffered from mechanical issues, before Schumacher made a mistake and went wide.

Their problems handed Armstrong – who had started in 13th – a shot at the podium on his first F2 start and the ART Grand Prix racer duly delivered. Behind him, Shwartzman was handed third and despite his best efforts, couldn’t get past his former F3 teammate.

Christian Lundgaard also impressed on his first start for ART, with the rookie taking fourth ahead of Dan Ticktum. Behind them, Giuliano Alesi enjoyed a sublime race in the BWT HWA RACELAB machine, rising from 18th to sixth.

Fellow rookie Felipe Drugovich, who had begun on the front row, dropped back to eighth but will start the Sprint Race on reverse grid pole as a result.

Ilott enjoyed a dynamite start off the line, swinging his UNI-Virtuosi machine to the centre of the track from third and launching through the middle of front-row starters Drugovich and Zhou. Polesitter Zhou had enjoyed a solid start himself, but a little two much wheelspin paved the way for his teammate to take the lead.

The Renault junior quickly fought back, going side-by-side with Ilott ahead of the second turn, although the Briton narrowly clung on. He wouldn’t have so much luck next time around, as Zhou reclaimed first.

Drugovich was placed under instant pressure by Schumacher in fourth. The MP Motorsport man had already stunned the field by qualifying in P2 on his debut, but seemed to have run out of surprises in the race, handing the position to the more experienced Schumacher.

Shortly after, Schumacher was joined in the top four by his PREMA teammate, with Shwartzman getting passed Drugovich to line up behind the German.

The pit window opened on lap eight and Armstrong made a bold call to dive into the pits just a lap later to switch to the hard Pirelli tyres. The Kiwi clearly banking on the new 18-inch rims going the length.

Zhou wouldn’t pit from first for another nine laps. When the UNI-Virtuosi man did head in, Ilott lost P1 to Schumacher, and subsequently went in for his own tyre change. Having just taken the lead, the German opted to wait another lap to switch from the soft tyres.

It was then that things really got tasty. Ilott’s pit stop was flawless and the Briton got out ahead of his teammate to steal the provisional race lead. Schumacher’s strategy worked even better, with the German returning ahead of them both.

Except, their tyres were cold. Zhou’s were warmer and he managed to claw back ahead of Ilott towards the end of the lap before piling the pressure onto Schumacher.

The German went super defensive in an attempt to retain the position and looked like he might just cling on to it, but was slow off the apex while his tyres heated up and eventually Zhou squeezed past in a narrow overtake.

Ilott’s tyres had warmed up by this point and the Briton pulled off a similar move in the next DRS zone, swinging to the left and sling-shotting down the side of the PREMA at Turn 3.

BWT HWA RACELAB pairing Alesi and Artem Markelov had both opted for the alternate strategy and pitted from first and second, handing back the lead to Zhou. However, just as the Renault junior looked to be in the clear for his first ever F2 win, problems struck. Suffering mechanical issues, he would be forced to head into the pits to investigate, handing the lead to his teammate.

The alternate strategy paid dividends for Alesi, who returned to the track seventh having started the race back in 18th. It was a similar story for Armstrong; the New Zealander had pulled off a masterstroke with the early pitstop, rising to third, with his tyres showing no signs of wearing out.

The ART racer was 4s behind the front two though, with Ilott and Schumacher in a battle for first. That was until a mistake from Schumacher saw the German lose the rear at Turn 7 and head straight off the track. The PREMA man barely managed to keep it out of the barriers, swinging the car around and returning the track, but he was out of the points with less than 10 laps to go.

This handed Ilott an easy run to victory, but the fight continued behind him. Shwartzman was still banking on Armstrong’s tyres running out of steam in the battle for P2, but his patience was fast running out.

The fight was heating up, which brought flashbacks of the Formula 3 race in Spielberg last season when the pair collided while running first and second after an intense battle for the lead. Shwartzman showed maturity to stay behind though. Three times he went for the position, but Armstrong slammed the door shut each time and the Russian was smart enough to know he was beat.

Ilott would cross the line in first ahead of the pair, with Lundgaard fourth on his own F2 debut. Behind him, Dan Ticktum took his highest ever finish in the Championship ahead of Alesi and Louis Deletraz. Drugovich took eighth and reverse pole, followed over the line Nobuharu Matsushita and Roy Nissany.

“I got an amazing start and in the first lap me and Guanyu Zhou were fighting. It was a great scrap at the beginning and Mick {Schumacher} got involved as well and we were fighting until the pit stops, where everyone kind of undercut each other.

“Coming out on the prime tyres, it felt like we had a lot of pace once we got them up to temperature. Obviously, Zhou had a lot of bad luck with whatever problem he had. What a disaster for him because he was really, really pushing the pace there and I think that we would have had a really good race at the end.

“I think that I was quite lucky with Mick making a mistake, which meant that I was able to break away and set some really good times at the end. It is amazing to start the year like this and I want to say a big thanks to the team for putting on an amazing car. It was great to trust them after all this time to put that together, so big thanks to them and let’s see what we can do tomorrow.”

Drugovich will start on the front row for the second successive race, following his P8 finish today, which hands him reverse pole. The Brazilian will hope to have learned from a tough debut. Lights go out at 11.10am (local time).