Williams: We are going in the right direction 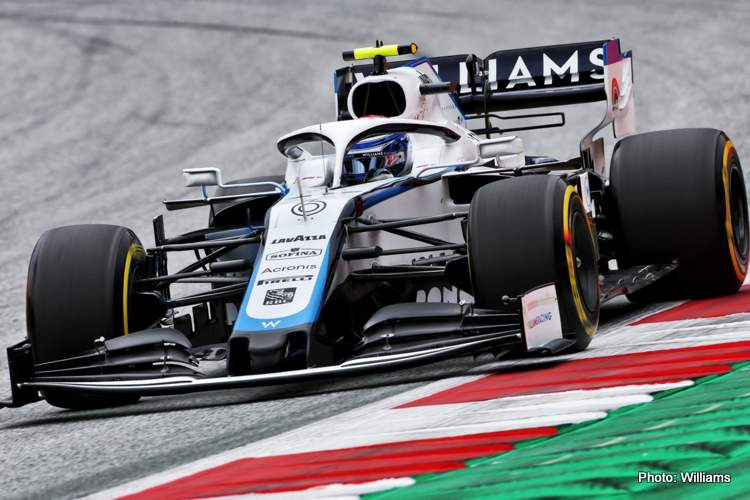 There may be a ray of hope for the beleaguered Williams team, although they have not closed the gap to the top times, some of their rivals may be slipping towards the rear end of the grid which has been the enforced hangout for the once mightiest team of them all.

On Friday, for a change, the pair of Williams drivers were not last and second-last in all sessions as has been the tradition over the past few years.

George Russell was 17th in session one and 18th in the afternoon stanza, with rookie teammate making his debut with 18th place but ended his first day as a fully-fledged F1 driver last of all. The gap between the pair was a full second at the end of FP2.

Dave Robson, Senior Race Engineer: “It has been great to run the cars again and to finally begin the 2020 season, especially in the imposing surroundings of the Red Bull Ring. The ‘closed’ nature of the event undoubtedly makes for a different working environment but, so far, our tentative steps back towards racing have gone very well. We are grateful to have the opportunity to start the season here in Austria and we look forward to hopefully welcoming back the crowds later in the year.

“The overnight rain compromised the FP1 run plan a little but nonetheless we were able to continue the work that we began several months ago in Barcelona. Although the whole of Formula One has been in shutdown for much of the spring period, we were still able to refine some key elements of the FW43 ahead of this event.

With good weather throughout FP2 we were able to test some set-up options that we expect to use later in the weekend. Both cars ran their intended programmes and the data gathered looks positive. As usual, we will take the time this evening to go through the details before deciding on a final specification for qualifying.

“Having spent so long away from the track, it is easy to forget how demanding it is to drive and operate these cars and both drivers and car crews did an excellent job today. Of course, it is also Nicholas’s first full race weekend in Formula One and he did a great job throughout, building on his experience from Barcelona and the simulator. George too was impressive today and he was able to apply his experience and professionalism to lead the rest of the team through our first day back at the track.

“Tomorrow the pressure will ratchet up a notch or two, but we are ready to face that challenge and get the best out of the car whatever the conditions. Whilst we will be focussed primarily on this weekend, we will not lose sight of the fact that we have a rare opportunity to test the cars and drivers over two consecutive weekends.”

George Russell: “It was fun to get back behind the wheel and my body took a bit of time to get used to the g-force again. It was a productive and encouraging day; our low fuel pace isn’t as good as our high fuel pace, where we seem relatively competitive. By the end of the day, I was back in the groove and happy in the car. We are going in the right direction, and that was our main focus.”

Nicholas Latifi: “Overall, it was a mixed day, but I felt comfortable getting up to speed in the car. FP1 was a pretty positive session and we got through a few test items even with limited running due to the rain.

“FP2 was a bit more of a difficult session as we decided to try some new things to learn and I made some mistakes, but that is what practice is for. I really enjoyed being back in the car. It was the first time I have driven an FP2 session, so I can now say that I am officially a Formula One driver.