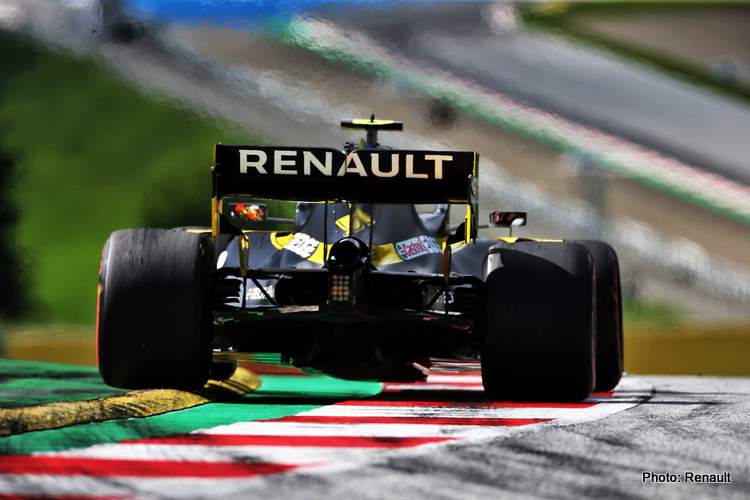 Renault were content with a solid performance by their drivers and package on day one of the season-opening Austrian Grand Prix in which Daniel Ricciardo ended the day as the fifth quickest driver with Esteban Ocon eleventh on his return to racing after almost 600 days away from the F1 grid.

Daniel was in the top ten in both sessions, P8 in FP1 which became fifth at the end of the afternoon at Red Bull Ring, while Esteban made his official Grand Prix debut in Renault colours and ended the day eighth fastest.

Daniel was the first of the two upgraded Renaults to leave the garage in FP1 with Esteban shortly following suit. The Frenchman’s session ended 15 minutes early as a precaution after sustaining damage to parts of his bodywork.

In the afternoon session, both drivers continued to work through the usual low fuel simulation before focusing on long runs in preparation for Sunday’s race. Daniel’s sole run on Softs proved good enough for fifth, with Esteban half a second behind in eleventh.

What we learned today: We have a good basis for the weekend.

Daniel Ricciardo: “Firstly, it’s really nice to get back into it. After Australia, I think we were all a bit nervous if we were going to be here, so it’s great to be out there again. The car felt good straight away and we carried some good momentum through the day.

“Our long run pace gives us something to work on, while the low fuel pace looked decent, so I’m pretty happy with that. Taking the timing board out of it, the car feels like it’s progressed, so it’s positive feelings and I’m looking forward to qualifying.”

Esteban Ocon: “It definitely felt good to be back and I’m very happy to have a decent day’s running. There are little things to improve here and there but that’s normal after a long time away from driving. It’s getting there, the pace is promising and looking at the team today we are in a good place. Our short runs were fairly quick, and the pace is there. I just need to pull it together when it counts tomorrow.”

Alan Permane, Sporting Director: “It was a very solid day from both our drivers and, of course, the team. We came here very well prepared after running a two-day test here a couple of weeks ago. We were straight into a rhythm this morning with the cars performing well and the drivers happy with the balance and grip.

“Our long run pace was also decent this afternoon and – with good information on all tyres – we can develop a decent race strategy. We now look forward to a competitive qualifying tomorrow.”