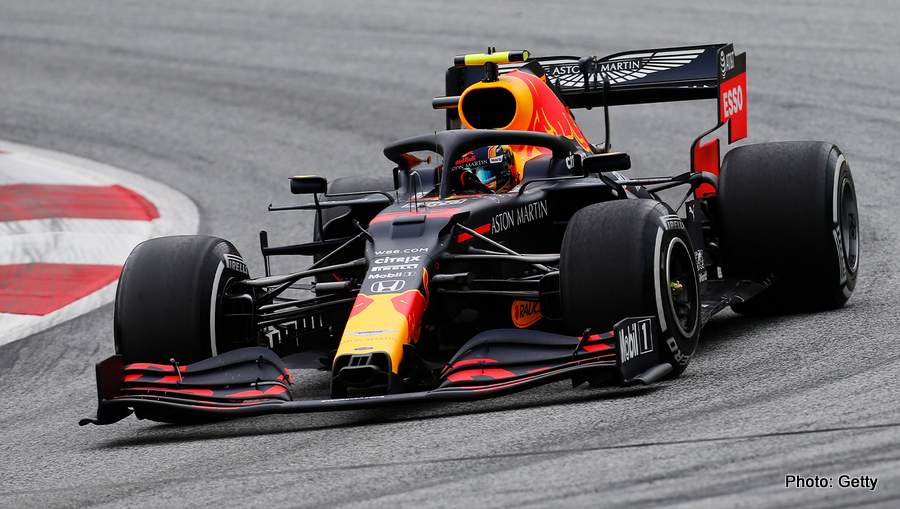 Much is expected of Red Bull this weekend at their home track, the Austrian Grand Prix provides them with a double-header at a venue where they have been unbeaten in the previous two years.

It was evident that both Max Verstappen and Alex Albon, like their rivals were rusty and both endured a moment’ or two during the course of the day – it’s been a long enforced lay-off!

It was not an earth-shattering first day, but there is nothing to suggest there is anything amiss in the blue camp, but rather that Friday was more of a refamiliarisation exercise rather than a day they were hunting lap times.

Verstappen ended the day nearly a full second off the top time and, although only a couple of tenths shy of his teammate’s best time, Albon was 13th suggesting that they have yet to pull the trigger on the Honda package.

The Dutchman reported at the end of the day, “It felt good to be back in the car and after a few laps you are quite easily back into the rhythm. Overall it was a positive day, the car was handling well and I’m pleased with the number of laps we did which is really important after such a long break.

“The lap times don’t really say anything because I broke my front wing on the push lap, so we had to fit a different wing. I think we were a little too aggressive for that and I had a spin and a little off, but nothing major.

“The kerbs are what they are here and it’s the same for everyone, the front wing doesn’t really like the yellow kerbs so we do have to be careful. We are I think confident and there are always things we can do better but overall it was a good day and I’m looking forward to tomorrow.”

Albon was equally unperturbed by what the timing screens had to say, “Today felt pretty good and it was nice to be back in the car. I’m happy and excited that we’re back underway and I think everyone was on it straight away which I was quite surprised about!

“It’s been a long time since we did this amount of running so there’s a lot to look through now ahead of tomorrow. There are a couple of things we need to work on, and there’s always a bit of time in your driving and set-up, so we’ll see where we are tomorrow but we know what to do.

“You’ve got to build up to the limit here as the kerbs are dangerous and some of them can be front wing killers if you hit them too hard. But overall the car felt good, I feel good, and I’m looking forward to tomorrow.”

Max will be looking for a hat-trick of victories in Spielberg on Sunday to add to the big trophies he collected in 2019 and 2018, while last year his teammate Alex was plying his trade at Toro Rosso.