Mercedes: We will take today’s result with a pinch of salt 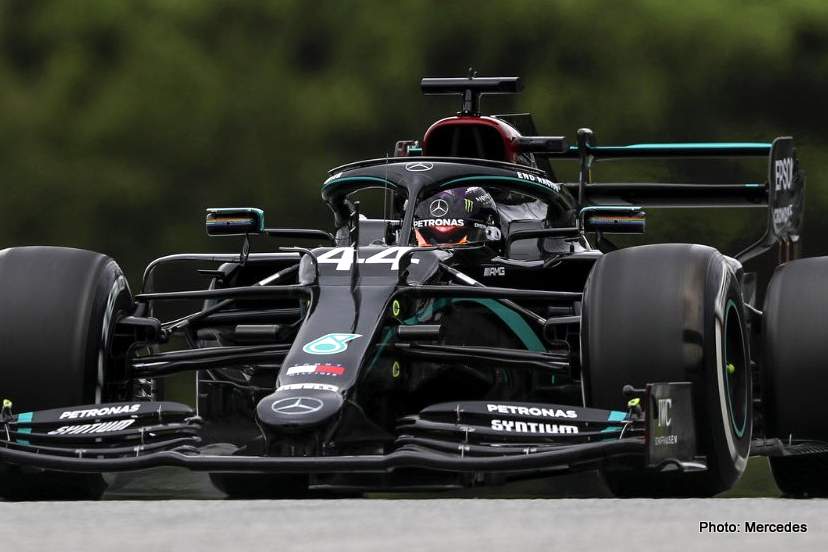 It was back to business and business as usual rolled into one on the first day of practice for the Austrian Grand Prix weekend as their reigning Formula 1 World Champion owner day one in the pretty, albeit deserted, Spielberg hillside.

One-two in both sessions, with a gap of at least a half-second (if not more) to their closest rivals suggesting that the pre-season favorites tag was well attached to the once silver but now Black is Beautiful cars and everything that makes them what they are.

This is what the world champs had to say at the end of day one of the season opener at Red Bull Ring on Friday:

Lewis Hamilton: “It’s great to be back. It’s been a long time coming. The new car obviously feels different than the 2018 car we got to test at Silverstone a few weeks ago, but I think we have also been able to continue to improve the car compared to last year, so that’s a big positive.

“The track was a little bit greasy and while the grip will pick up, it feels like the track only improved a very small amount. It was looking good out there today, but you can never take too much from practice. You never know what power and fuel other teams are running.

“So we will take today’s result with a pinch of salt, try and improve the car tonight and come back for the fight tomorrow.

Valtteri Bottas: “It’s fantastic to be back in the car. I’ve really enjoyed every single lap, every single run. We’ve been making good progress throughout the day, step by step, as it is to be expected after such a long break. It was a decent day overall, although we had a small problem with my car towards the end.

“The grip level was pretty low today, but I’m sure the track will ramp up over the course of the weekend. We need to stay on top of that as that can change the set-up quite a bit on this track. The main challenge will be to get the balance right for both high-speed and low-speed corners and fine-tune the car for that single lap on Saturday, while keeping our race pace in mind as well.

“It’s only Friday, the lap times will come down tomorrow with the track improving, with additional performance items from all the teams and with the drivers pushing hard, so it will be interesting to find out where we stand.

Andrew Shovlin: “It’s great to be back at the track after such a long time. We have quite a few new developments on the car since it last ran in winter testing, so we’ve had a busy day checking that they were all working as expected.

“We’ve had a couple of little niggles that got in the way of running today for both drivers; Lewis had a telemetry outage at the start of the second session that held us up and Valtteri stopped early after a gearbox problem. We’re still looking into Valtteri’s problem, at the moment we don’t know what has caused it.

“This circuit hasn’t been kind to us in recent years, but the car seemed to be working reasonably well from the start this year. We’ve still got work to do on the balance but more relevant is that we’re expecting a much hotter track tomorrow that will put the tyres into a different working window.

“Our pace seemed competitive today, but we don’t really know where everyone is in terms of fuel or engine modes and we tend to see everything close up when the temperatures go up.”