McLaren: We have good potential 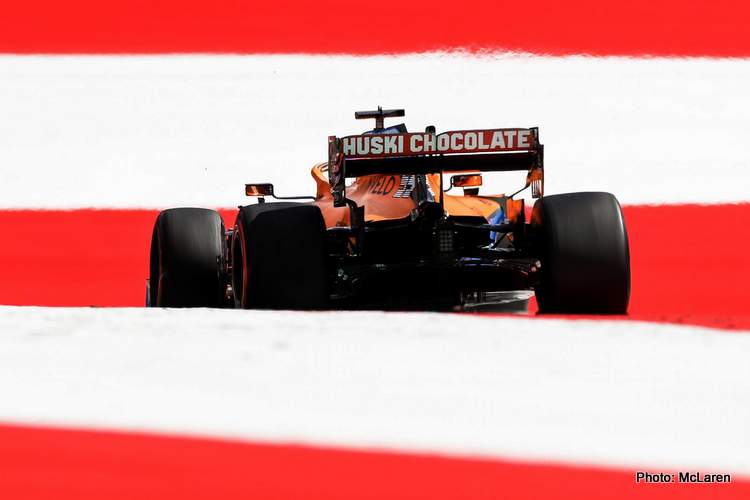 McLaren’s first day back at work was solid and indications are that they are pretty much where they were last year, namely the sharp end of the midfield but a tad off the pace set so far in practice but it is early days in the course of the season-opening Austrian Grand Prix.

On Frdiay, Carlos Sainz was fourth in the first session but an issue curtailed his running in FP2 and he ended the day 10th fastest. In the sister car, Lando Norris was sixth in both sessions.

Carlos Sainz: “It’s a positive first Friday for the team, it felt great to be back in the MCL35. We had some challenges and need to keep an eye on those yellow kerbs. I ran over one on my flying lap which cost me time on the final sector.

“Another minor issue kept me in the garage towards the end of the session but until then the car was showing a decent pace. We are starting to see the pecking order a little better and we are up for a tight Saturday. Let’s see what happens tomorrow!”

Lando Norris: “It’s so good to be back in the car, getting up to speed, getting used to driving a Formula 1 car again. The first few laps are a bit of a shock to the body, because there’s nothing like driving an F1 car, but it’s great to be back. We got through our run plan, we did a good number of laps and I’m pretty happy with the car.

“There’s always things to improve on from my side and with the car but on the whole it’s a good way to start, so I’m happy. It’s just good to be back and getting in shape again, I’m looking forward to getting back out tomorrow and trying to improve.”

Andrea Stella, Racing Director: “Starting the season after such a long delay required everyone to rapidly get up to speed. For the drivers there’s a need to get used to the pace of a Formula 1 car, both physically and mentally. They were quite colourful in describing the sensations, but they did it very quickly. From an engineering and operational point of view we had to do the same.

“There’s only seven corners at this circuit but there’s always loads of things happening. It’s a track with aggressive kerbs and bumps, which always have an attritional effect, a challenge we’re dealing with at the moment. Performance-wise, I think the car confirmed the progress we saw in the winter – but we have to acknowledge that other teams have also made good progress.

“Obviously there are midfield teams who seem to have taken a significant step forward, which makes the competition even tighter. But, as ever, we focus on our own performance and I think we have good potential. There’s a few things we can optimise overnight and we can fight for Q3. We’re looking forward to qualifying tomorrow and the race on Sunday.”

Check out our mini #McLarenUnboxed as we go behind the scenes on Friday afternoon. #AustrianGP pic.twitter.com/YWmqJ0Em1R