Haas: Performance-wise we’re not happy where we are 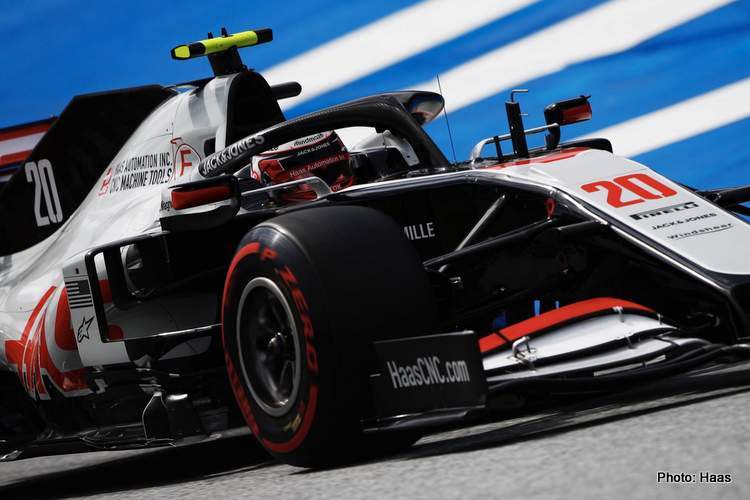 The long-awaited opening round of the 2020 FIA Formula One World Championship began with practice Friday at the Red Bull Ring in Spielberg, Austria as teams prepared for Sunday’s Austrian Grand Prix.

Two 90-minute sessions – FP1 and FP2 – on the 4.318-kilometer (2.683-mile), 10-turn circuit brought the grid together for on-track action for the first time since the final day of pre-season testing in Spain on February 28.

Both Haas F1 Team drivers were fast out the gate at 11:00 local time to start the session, Magnussen running his installation lap on the Pirelli P Zero White hard tire with Grosjean shod on the Yellow medium compound. A brief two-lap run each on the Cinturato Green intermediate rubber followed – the track drying from earlier showers but some light rain falling sporadically early in the session.

A brake fluid leak thwarted Grosjean’s hopes of a productive morning as the Frenchman’s VF-20 remained in the garage for the majority of FP1 as his crew worked feverishly to rectify the issue. He failed to set a lap time but returned in the final minute for a solitary installation lap. Magnussen’s running proved more fruitful with the Dane enjoying a baseline run on the hard tires before switching to softs to clock a best lap of 1:05.906 – good for ninth fastest on the timesheet with a total of 27 laps to his credit.

Grosjean was first out the pits for FP2 in the afternoon, banking a 14-lap run on hard tires to start his run program. Magnussen commenced the session with an 11-lap tally on the medium compound. Both drivers switched to the Pirelli P Zero Red softs for their qualifying simulations. Magnussen placed 15th overall having set a best time of 1:05.678. Grosjean’s fastest lap of 1:05.908 netted him 16th. Both drivers bolstered their lap count with high-fuel, race-simulations to bring Friday’s track action to a close.

Romain Grosjean: “It wasn’t an ideal start to the day, but it happens sometimes. The guys did a great job to enable us to get an install in at the end of the session just to check that the brakes were back to normal again. We then had a lot of work going on in FP2.

“We tried to make up for some of the time lost. I’ll tell you this though, coming out of the box and pressing the throttle, I did think to myself ‘wow this goes really fast’. It took me a little longer than I expected to get back to it and focusing on things like getting the braking point right and really just the overall sense of speed –.

“F1 is very special and unique in that sense. Things settled though and we did manage to run through the planned program. There’s obviously a bit more lap time to gain, the midfield is certainly looking quite tight.”

Kevin Magnussen: “It was fantastic to be back in the car again and we had a decent day. We’re still learning about the car and discovering little things about it. The rear grip is very good in the new car, but consistency is the key.

“The second session, it wasn’t as trouble-free in terms of some traffic and stuff, but overall though, I’d say it was still a good session – I’m still happy with the day. It’s been an interesting start and I can’t wait for more tomorrow.”

Guenther Steiner, Team Principal: “It’s good to be back, but it’s not long though before you get back to where you left off trying to do the best job possible. You find yourself back to dealing with issues and dealing with all the things that happen.

“FP1 wasn’t fantastic, Romain (Grosjean) didn’t really get out as we had a problem with a brake line which was leaking. We had to change the suspension for that, so he lost quite a bit of his running time. It was important to be running today as he hasn’t driven a F1 car in four months.

“We got it fixed and he got back out this afternoon with some good running. Performance-wise, we’re not happy where we are at the moment. We’ve got things we need to work on, we know that, and we’ve got opportunities to do that. Everybody in the team will be working hard tonight to make things better for tomorrow. The best part of today was that we got back to racing.”