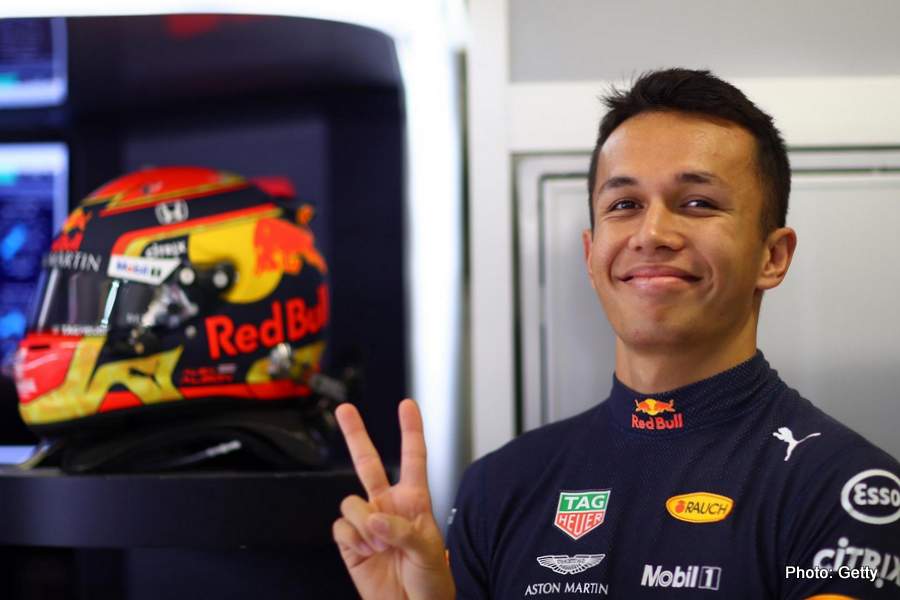 Although Alex Albon ticked all the boxes in his Formula 1 rookie season last year. plucked from obscurity to the glare of Toro Rosso in the top flight and, not long after, promoted to the Red Bull team alongside prodigy Max Verstappen.

With those boxes ticked, year two in the Red Bull senior team will continue to bear pressure on the likable and quiet-spoken Thai driver. Afterall he has Daniil Kvyat and Pierre Gasly (the man he replaced at Red Bull) biding their time at rebranded AplhaTauri just in case Alex slips up.

Speaking ahead of the season opener, The Red Bull number two driver knows what he has to do next

How did you react to the sudden cancellation of the Australian Grand Prix?
Alex: I would say on a personal side the whole feeling of that situation in Australia was obviously very unique. You have so much adrenaline building up, I think that coming into winter testing and then having that mental preparation, the whole team has that atmosphere that we’re going racing, and everyone is streamlined, and everything is going in an upwards trajectory. I remember sleeping in my hotel that night, and getting amped, it was Friday, it’s FP1 on a street track like Melbourne, you don’t sleep that well, and then that morning I was just having breakfast and just got told ‘we’ve booked you a flight back’ so it’s very strange, and it kind of resets you. You feel like ‘what’s my purpose?’ kind of thing. And you go back, and it was a reset. We were just waiting until we got this date which is now in Austria. Now the season restart has been confirmed, I’m excited to get started again. My first day back at the factory after shutdown felt like my first day back at school. It was nice after all this time away from racing to get back to it finally.

Arriving home from Australia, what did you do to keep busy whilst plans for the 2020 season were up in the air?
Alex: Coming back to the UK, the first thing was really just making sure, I think as a team we were very cautious with just the situation. We obviously had a couple of outbreaks inside the paddock and I think that was the first thing as a team, safety first, so we all isolated really, and there isn’t much you can do. It was, very much stay, at home, the first thing I did was speak to the guys at the factory to collect some gym equipment because I had none at home, and just have everything ready so I could top up (fitness) but without having a date you were kind of just living day by day not having so much of a focus and to keep the motivation was not easy actually. You were just kind of waiting for news and speaking with Christian, just getting texts, the odd updates of what was happening, but that was about it. We’re athletes so it’s our job so we’re still making sure we’re ready at any moment, but it was just a weird situation, especially because I have never spent this long away from a racing seat since I first started which was when I was seven (years old).

What have you missed most about racing?
Alex: I’ve missed just the feeling of the speed, being in the car, kind of that process of arriving to the track and perfecting on a lap, and pushing it to the limits, it feels very strange to be at home and not having that sense of speed. Doing the filming day was just a highlight of that where I was a bit like ‘my god, this thing is so fast!’ You kind of think it feels so good to be back in it.

After so long without racing or travelling, how important is it to be 100% ready from Round 1?
Alex: We are going from one of the quietest periods of time, to one of the busiest we will have ever experienced. It’s going to be crazy for all of us. The whole atmosphere is going to be really different. There will be no fans, which is really what makes the sport, so that will also add to how strange it’s all going to feel. Racing week after week for however long is going to be tough for everyone in the Team, and it’s going to be important to start the first few races strong. We didn’t run in Australia so everyone is going to be learning and I think the teams that really get into the racing rhythm first will be the best and the ones to beat. It’s important to go into the first race with as much energy as you can – it will be about maintaining your energy and keeping it as high as you can for as long as you can.

How do you feel and are you ready to hit the ground running in Austria?
Alex: I feel good. There’s so much time that, with any driver, there’s going to be that level of uncertainty as to what’s going to happen. I’m glad I did the filming day to get that initial dust off my shoulders but I’m excited, I think we’ve all been waiting for this. There’s been a long drought, we all do this because we love it and we’ve missed it, so I can’t wait to get started.

How will having back to back races at the same circuit affect the way you approach the weekend?
Alex: The dynamic is more or less very similar on that first race weekend, so the first race weekend you would treat like another one, procedural things like FP1, FP2, FP3 would always be the same. Where it changes most probably is that second weekend where you’ve got a perfect opportunity to directly compare to your first weekend, try some things which are very risky to try during a normal race weekend because it’s a new track and everything has changed. Now you’ve got the same circuit, pretty much the same weather and you can try things so I’m sure every team is going to treat the second weekend with a bit more risk and try some things out because you know if it doesn’t work out you can go back to your first-weekend car.

At same circuit back to back races, do you think the fastest team and driver at race one will be the same at race two?
Alex: If the people are fastest by a good chunk then it’s always hard to get that lap time back but saying that, yeah there’s a good chance there’s going to be differences and that’s where I think top teams like ourselves will have to go through that data, be careful with our feedback as drivers to maximise and focus on the areas we need to improve on after that first race.

With the calendar not finalised and the number and location of races not fixed, is there added focus to maximise every race this season?
Alex: Just because there’s an unknown kind of feeling of even how many races we’re going to do, what circuits we’re going to go to, there’s no change in our job and that’s really just to maximise every weekend – that’s all there is to it. Being back to back to back, we will have less time to prepare, unlike a normal weekend where we do some simulator, and of course there will be tracks which we’ve never been to, but I think that’s a good opportunity. I think the good teams will be quite flexible, the same with the drivers, being on top of it and understanding the car and the tracks as quick as possible, and I think that’s an area where as a team I believe we will be pretty successful. Just looking historically at how Red Bull are good at interpreting and getting up to speed quickly. It should be good!

In this condensed 2020 season, will driver fitness play a bigger part in performance this year?
Alex: I think there’s definitely an element to it. The first two races not too much, Austria is quite an easy circuit with few corners and quite a lot of breathing time in between with the long straights. Once we get to Hungary, that will quickly change and normally we will arrive to Hungary with however many rounds we’ve done and so by the time we’re there, it’s all easy flowing. It will be three weeks (in a row) so we won’t have much rest. It does play a part, Hungary, Singapore last year for instance, there is performance in your fitness so yeah it will do, if it’s a tie-breaker we’ll see.

Is the pre-season form guide still accurate given it was so long ago now?
Alex: Barcelona already from winter testing is quite inconclusive. You don’t know where the teams are, but everyone has a fairly good understanding of where everyone is at, adding another four months on top of that, it really jumbles up everything. There has obviously been a summer factory shutdown, which means teams haven’t really had too much time to play around with it.

How important is it to qualify well at the Red Bull Ring or are there opportunities in the race?
Alex: With such few corners it is hard to maximise your car in terms of making a difference so qualifying is generally pretty close, but at the same time it really doesn’t define what happens in the race as we’ve seen in the past two years with Max. A good car can really save the tyres there, temperatures are normally really hot as well so I’m sure it won’t be any different. The main thing is just to wait and see. I think coming from winter testing we have a good car and I’m sure even from the filming day we did, everything feels pretty good so we’ll see.

Lastly, we will have a new “normal” way of working with the COVID-19 protocols in Austria. How have you found it so far?
Alex: It seems to be extremely well organised already. It is going to be quite complicated but from my experience with the guys at the factory, they are all on top of it already. I was at the factory and the lengths the Team is going to is great to see. It’s more about just keeping safe. We are going to be travelling and together a lot, we are going to be in our own little bubble. We all have to be really careful with everything at all times.