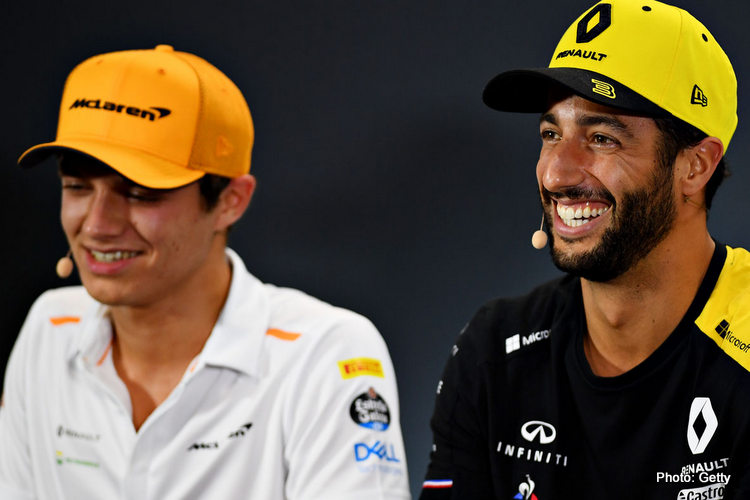 McLaren’s Lando Norris says he’s excited at having Daniel Ricciardo join the team in 2021, particularly given his track record compared to Carlos Sainz.

Set to lose current teammate Carlos Sainz to Ferrari next year, Norris revealed he is looking forward to matching-up with a seven-time Formula 1 race winner.

“He’s confirmed himself to be an extremely good driver against a lot of other good drivers and that’s why McLaren has so much confidence in him,” he told The Race. “Carlos has been very good, but Daniel has just shown that a few more times compared to the drivers which have won multiple world championships.

“So I look forward to that partnership and working with him and pushing each other.

“It’s going to be cool to see what it’s like working with him, a guy who’s won multiple races and has learned from guys who have won those multiple world championships.”

In contrast, Sainz has only had one career F1 podium, last year in Brazil, although 2019 was the only time he was in comparable machinery to the Australian.

And while Norris and Sainz have enjoyed a good relationship in their time together so far, Norris sees a similar bond being built with Ricciardo, with whom he shared several humourous exchanges last year.

“We’re fun characters doing and going to have a lot of fun. But we both know, and especially Daniel knows, that we want to be really pushing the team forwards and winning races and making sure that the car’s fast.

“We have to be serious when it comes to doing that.

“I’m sure we’re going to have fun but I think we’re also going to get along well in terms of pushing the team and being hard working.

“It’s still a few months away from getting into that sort of stuff. But I look forward to it.”