Wolff: Both our drivers can be world champion 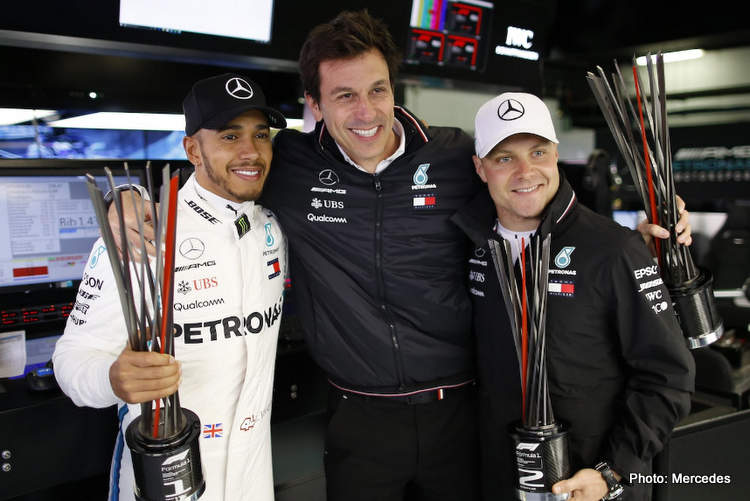 Valtteri Bottas and Lewis Hamilton will be given the same backing at the start of the 2020 season in their quest for the driver’s championship, says Mercedes boss Toto Wolff.

Yet to seriously challenge Hamilton in their three years together, Bottas has long been viewed as the de facto “number two” in Mercedes’ pecking order by many outside observers.

However Wolff maintains the Finn continues to be given equal treatment by the Silver Arrows, at least when the season begins.

“Both Bottas and Hamilton have always had the same opportunities at the beginning of the season,” he told Austrian newspaper Österreich. “We want to give both our drivers the opportunity to be world champions.”

In Wolff’s estimation, both his drivers have the talent to win the title – and the mindset to go with it.

“You should never imagine that there is a number 1 driver and a number 2 driver, because they all have the same ambition to win. Otherwise they would not be in Formula 1,” he said.

On a separate note, Wolff was asked about both his own future with the team and the potential of signing Sebastian Vettel for 2021, both of which he did not move to rule out.

“I’m in my eighth year now [as team principal] and we’ve won the title six times. I also have to ask myself the question: Am I the best man in this role?

“Is my motivation, my energy still on the same level as before? Because what I don’t want is to slide from very good to good.

“[Regarding Vettel] I stick to what I’ve already said: Sebastian is a four-time world champion. He has helped shape the past decade and is now surprisingly on the market.

“Right now the focus is on our current drivers. Sebastian is not our first priority, but you should never rule it out.”