Ricciardo: I’m certain I could win a title against Lewis 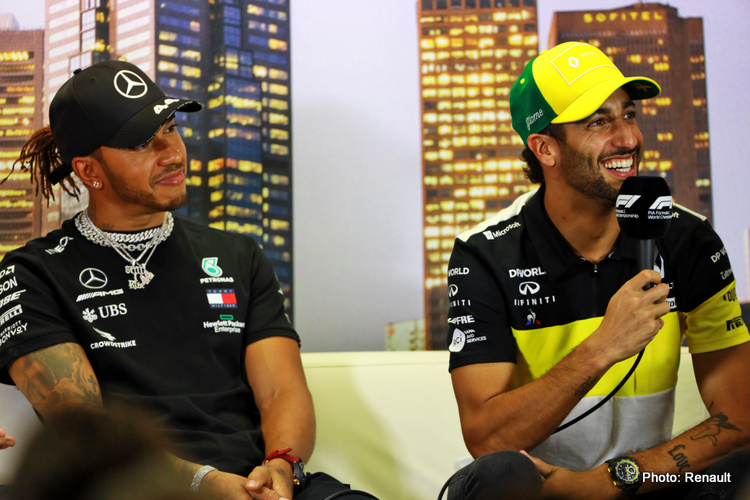 Daniel Ricciardo believes he could beat six-time Formula 1 champion Lewis Hamilton in the same car, although he is unsure he could sustain such a level of excellence.

A seven-time grand prix winner, Ricciardo has never been in serious championship contention through his nearly-ten year F1 career, as years with first Red Bull and now Renault have coincided with the dominance of Hamilton’s Mercedes team.

Nevertheless, the Australian has managed to distinguish himself as one of the better drivers in the sport, and believes there isn’t much separating him from the Briton.

“There’s always a small handful of people who have the talent to win on any given day, and our sport is no different,” he told Autocar. “I believe there’s a group of us at the top tier, and I believe I and a handful of others, in the same car, could have given him a run for those titles.”

Taking five of the past six driver’s championships, Hamilton’s only down-year was an unreliability-plagued 2016, when teammate Nico Rosberg took the title before immediately retiring. The best effort of Rosberg’s successor Valtteri Bottas has been his 2017 season, when he finished 58 points behind Hamilton in the standings.

Watching from afar, Ricciardo implies he could do a better job, but acknowledges that Hamilton’s consistency is elite even among the sport’s best.

“As far as talent or ability to push a car to the limit – the skill set – there are a few of us that can get there. But we need the right car, and then, for this group, the difference is less about speed and more about the ability to nail results race after race.

“On a given day, a few of us could win. Where you have to hand it to Lewis is that he does it time and time again.”

“What separates that little group, beyond the car, is the mental and physical ability to deal with everything this sport throws at you, week in, week out. It’s the days when your health isn’t so good, or you’re feeling a bit jet-lagged, or you’ve just had a bad week. If you can still get in the car and deliver on them, then you can be champion.

“The point with Lewis – the point that makes him special – is that he has done that six times. Even if you argue he’s had the best equipment, that achievement is remarkable. To stay on himself year after year, to keep pushing himself, to take on the pressure of being the one we’re all hunting: that’s remarkable.

“For all my confidence – and I’m certain I could win a title against him – could I battle and beat him year after year? I don’t know. It’s some achievement, and it warrants respect.”