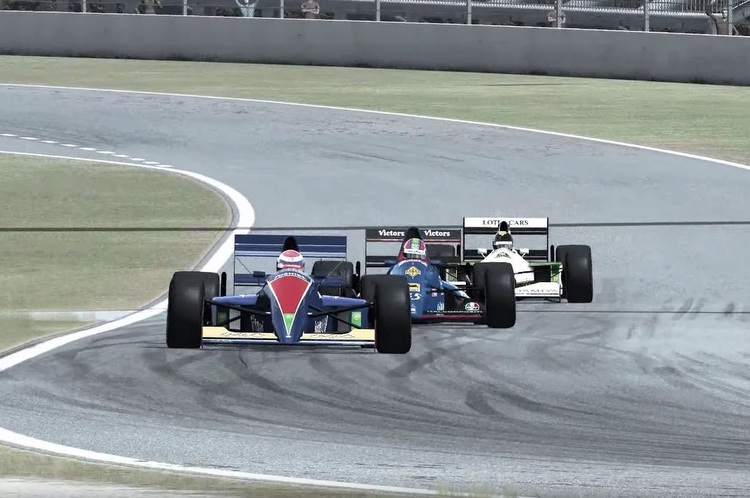 “And now, the end is near. Regrets, I’ve had a few, but then again, too few to mention…”

As announced from the outset, this series of fifteen short pieces did never aim to provide an accurate overview of the past of race sims. Nor did it intend to objectively review any of the sims mentioned.

Rather, think of it is a walk down memory-lane, a walk I thoroughly enjoyed sharing with you. And as we reach the end of our journey, the obvious question becomes inevitable:  “How realistic are those race simulations?”

Well, let me give you a straight and honest answer: I don’t have a clue. Of all the cars that I have raced on my PC, from sixties Formula 1 machines over modern fire crashing rally monsters to American stock cars, I have driven exactly none in real life. Then, I am no engineer and lack any real scientific understanding of the physics of a race-car. And except for about three laps on the closed part of Francorchamps in an old Golf III VR6, I have never even driven on a race track.

I can tell you this though. Some years back I allowed myself a little folly and got me a German sports car. According to the documentation, its flat 6, 3.8 liter engine should allow the car to reach a top speed of about 295 kilometers per hour. I have had the car for nearly 10 years now and the fastest I have gone is about 210 on a stretch of German Autobahn. After a mere 6 seconds, I was already decisively backing off from the accelerator.

The thing is that, when driving at high speed in real life, there always is a little voice in the back of my head nagging that if anything, even the slightest niggling detail, goes wrong, I am likely to hurt myself. And odds are that it may be very badly. That deep sense of self-preservation keeps my right foot from going down during long stretches. I guess the Salonens and Vettels of this world don’t have such a little voice. Or they are in any case way better at ignoring it.

That preservation instinct is obviously much less of an issue behind a simulator. In all honesty, even without disposing of all the megahertz and gigabytes of memory and processor speed in current computers, the bicycle on which I flew around my grandparents house was better at simulating that tricky aspect of racing called danger than anything that followed.

But that is quite OK. I’m not looking to effectively race. As long as the proposition is sufficiently immersive, I am a happy camper.

I am no Nico Rosberg or Lando Norris using the sim to prepare for my next race. Nor am I an uber-alien à la Greger Huttu racking-up his umpteenth iRacing World Championship, or a Mark Hutchinson chasing his Formula Sim Racing crown. I would not even succeed in qualifying for a race in those series. Hell, it would be a wonder if I ever make it into the booth of such an event.

And if you are looking for an expert regarding race sims itself, I would again advice you to go knocking on another door. I have barely touched iRacing, while sims like Project Cars or Raceroom are yet to see the first kilobyte of my hard-disk.

But therein hides the beauty of this thing: you don’t have to be Greger Huttu or Mark Hutchinson to drive these sims. You can also just be that bloke who, on a regular weekday, prefers to drive his simrig for an hour rather than indulge in brain-fade inducing television.

That bloke is me. And even for the likes of us, there are plenty of leagues around who will gladly welcome you and hand you a car on their grid. And if that does not work out, the artificial intelligence cars can offer really enjoyable racing in some sims, such as Automobilista and rFactor 2. Those AI have an added bonus by the way: if they are too fast, you can turn down their ability. Call it cheating if you want, but it beats running twenty zillion laps behind the rest of the pack.

So, to the extent that any advice coming from the likes of me may be worthy of your time, I would recommend the following simple thing: drive what you like when you feel like it. In the end, for the majority of mere mortals like us, simming is meant to provide fun, not headaches. If you enjoy driving cars in Grand Theft Auto like you just stole them with a PC racing wheel you picked up at Costco’s for a buck… Do that. If your thing is knocking off that last one thousandth of a second around Talladega with a top-of-the-line direct-drive steering wheel and ditto pedals. Go ahead.

Just don’t let considerations about the realism of physics or the historical correctness of a track layout bother you too much.

Short anecdote to illustrate my point. The main physics guru over at a league I often race does not have a single good thing to say about the physics in Assetto Corsa. So for years, I did not touch Assetto Corsa. Until GP247 head honcho Paul convinced me to have a go… And hear! Hear! Driving El Matador’s Celica on the Tajo Hillclimb-mod has been one of my most enjoyable sim-experiences lately. Just how Assetto Corsa reproduces the sound of that turbo wastegate… Magnificent.

So, drive what pleases you. Don’t worry about the rest.

Currently, I am doing a 1991 Formula 1 league in Automobilista over at the International Simracing Organisation. In a way, that completes the circle as it is back to Microprose’s GP1, one of the sims that started this entire madness. Although things have seriously moved on from the GP1-days. Graphically, there is no comparison as the below video covering the opening laps of this season’s Imola race shows.

Back to 1991 F1-cars, now in full Automobilista-glory. Appologies for the stutters in the video; I should really step up my capturing/editing method.

Then, the ISO-mod for Automobilista and the league that comes with it are of the rather hardcore sort, with full race distances and a mod that models the fragility of the tires and brakes of that era in Formula 1 to near ridiculous perfection. Be prepared for disappointment heading your way.

Resident aliens Coxon, Jaques and Canola kick my ass at every race. But then, in between races, they show up on the test server or Teamspeak and help me progress with setup and driving tips. Even if progress is, in my case, obviously of the very modest kind. Gone are the GP1-days when I won every single one of the season’s sixteen Grand Prix’ for Enzo Coloni’s humble team. In this league, I’m still yet to score a point for Lotus eight rounds into the season. Lately, just finishing a race already seems a solid accomplishment as I crash out more often than not.

Still, for all the undeniable progress, it amazes me time and time again how spot-on Microprose had figured out things like the track lay-outs. It is astonishing how easily I can find my way around the different tracks in Automobilista thanks to those countless laps around GP1’s tracks. Even braking points and gears used for corners seem to correspond with what I remember from GP1.

I also regularly drive laps with our head honcho, Paul Velasco, in rFactor 2 or other sims.  Paul always succeeds in picking a car-track combo for which I have a soft spot. Below, we are turning some laps at the old Kyalami. Therein lies another beauty of sims… All these great tracks from the past that have disappeared are still alive and kicking in sim land.

There is hence no doubt in my mind that new adventures will always be beckoning on the virtual horizon. It therefore seems fitting to end these memoirs with paraphrasing two taglines used by very different motorcycle brands: “The road starts here… Surfing the winds of change, it never ends.”

And now: go race! Maybe we will meet on a virtual track some day.