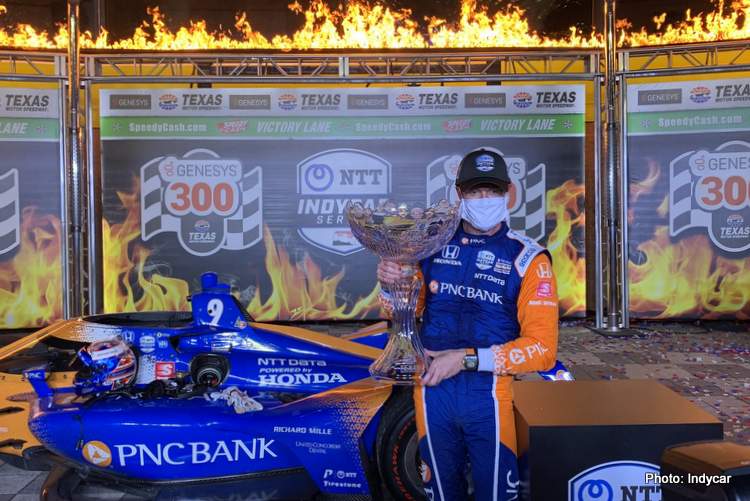 IndyCar packed every bit of its delayed season-opening event into one long, hot day in Texas without any fans in the stands. Scott Dixon was the fastest for most of it at a place he knows well.

Dixon, a five-time IndyCar champion, took the checkered flag at dusk Saturday for his fourth win at the 1 1/2-mile, high-banked oval, where drivers also practiced and qualified earlier in the day. The 39-year-old New Zealander raced to his 47th career victory and matched A.J. Foyt’s record of 18 seasons with a win.

“It was such a team effort,” said Dixon, third on the career wins list behind Foyt’s 67 and Mario Andretti’s 52. “It’s just so fast. Any situation we were in, we could just go for it.”

After a restart with three laps left following a caution when young teammate Felix Rosenqvist crashed while running second, Dixon sped away in the No. 9 Chip Ganassi Honda for a 4.4-second victory over Simon Pagenaud.

Defending IndyCar champion and polesitter Josef Newgarden was third behind Pagenaud, his teammate at Team Penske.

Nearly three months after the start of the season was put on hold because of the coronavirus pandemic, IndyCar finally got on the track for what would usually be the midpoint race of its season.

The massive grandstands that can seat well more than 100,000 people were empty, and not because of extreme heat — temperatures in the mid-90s with a heat index around 100 degrees Fahrenheit throughout practice, qualifying and even much of the race. No spectators were allowed, as will also be the case for the next race on the road course at Indianapolis Motor Speedway on July 4.

“It’s rotten that the fans aren’t here. I wish everybody was here to celebrate,” said Dixon, who extended his own record to 16 seasons in a row with a victory.

Gov. Greg Abbott rode in the pace car for the first professional sporting event in Texas since sports shut down nationwide because of the coronavirus. The only at-track spectators were people watching from condos in the building overlooking Turn 2.

Dixon had the top speed during the two-hour practice session, and qualified second. He went on to win the IndyCar title each of the three previous times he won the Texas race.

Rosenqvist had been second behind Dixon for several laps when he crashed trying to move through traffic. He got high going onto the backstretch with nine laps remaining, bringing out the final caution, and finished 20th out of 23 cars that started the race.

“It was really my breakthrough on ovals, I think. I really had a good shot there and threw it away,” said Rosenqvist, who slammed the steering wheel with both hands after the car came to a stop. “Just one silly thing screwed everything up.”

Dixon led 157 of the 200 laps, and had an earlier six-second lead over Newgarden wiped out by a caution for debris. Newgarden led twice for 41 laps and fourth-place finisher Zach Veach led the remaining two laps. Ed Carpenter, the series’ only driver-owner, rounded out the top five.

“I feel like we won the race with how bad we were,” Newgarden said. “My team fought. If there’s anything, we have an incredible fighting spirit. … We were just struggling. I was really struggling with vibrations on the tires.”

Because of the extended opening day, the race shortened to 200 laps from its usual 248 at Texas. It took only one hour and 38 minutes.

When Newgarden won the pole after being the last to take a qualifying run, there was a quick warning over the radio to the Team Penske crew to avoid celebratory high-fives.

All of the teams were already in St. Petersburg, Florida, for the scheduled season opener March 15. But they never ran on the streets of St. Pete, making the fast track at Texas the debut for the protective windscreens now over the open cockpits of the cars.

Texas became the season opener while keeping its originally scheduled date, which was supposed to be the ninth of 17 races. That would have been two weeks after the Indianapolis 500, which has been rescheduled for Aug. 23.

Drivers and team members went through health screenings when they got to the track. Many of them had already gone through similar screenings to get on chartered planes they boarded at dawn Saturday in Indianapolis — they were returning home after the race.

Crew members were required to wear face masks, and there was plenty of room for social distancing in the two 64-bay garages. There were also bigger-than-usual stalls on pit road.

Rinus VeeKay, the 19-year-old rookie driver for Ed Carpenter Racing who won six Indy Lights races last year, crashed during practice and then had his debut IndyCar race end with another crash after completing only 36 laps. His No. 21 car got high going onto the backstretch, then ricocheted off the wall to collect Alex Palou, another rookie.

Takuma Sato, the 2017 Indianapolis 500 winner and the Texas polesitter last year, missed the race after the Rahal Letterman Lanigan Racing crew was unable to get the No. 30 car repaired in time after a crash in qualifying about 2 1/2 hours before the green flag.

Relive all the action from the 2020 NTT INDYCAR SERIES season-opener, the #Genesys300 at @TXMotorSpeedway in less than five minutes.#INDYCAR pic.twitter.com/vA4ZJYSO9n 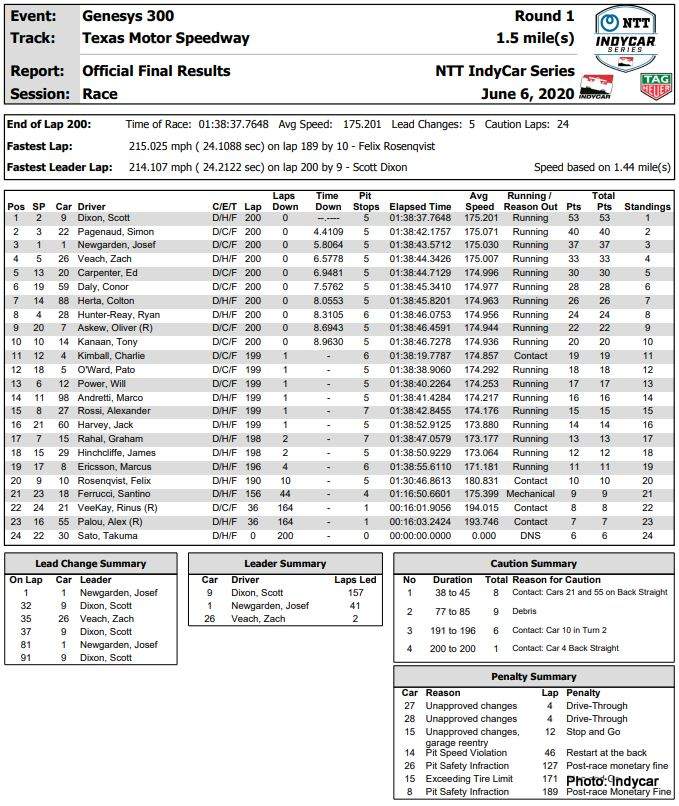