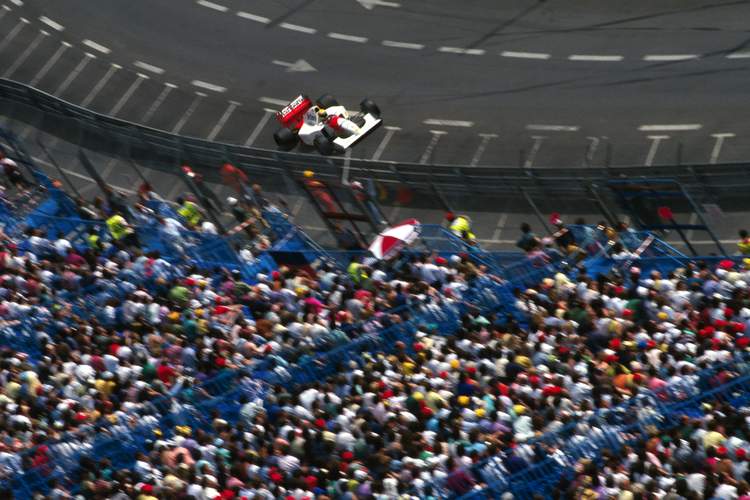 Still busy as end-May always is in racing, there were four grands prix on this day over the years.

Jo Bonnier scored his only ever GP win in the 1959 Dutch Grand Prix in the Owen BRM team’s first victory ahead of Cooper-Climax pair Jack Brabham and Masten Gregory.

The other here races were all in Monaco, the first being when Gilles Villeneuve kept out of trouble to win in 1981 after Nelson Piquet crashed late in race to hand the lead to Alan Jones, who then suffered a fuel problem. Villeneuve’s Ferrari 126CK ultimately won from Jones’ Williams Cosworth and Jacques Laffite’s Ligier Matra.

Ayrton Senna took the first and fifth of his six Monaco wins aboard a Lotus 99T Honda, 33 seconds ahead of Nelson Piquet’s Williams FW11B and Michele Alboreto’s Ferrari F1/87 in 1987. Senna benefited Nigel Mansell’s late puncture to win again in ’92, ahead of Mansell and his Williams-Renault teammate Riccardo Patrese.

Being late May, the Indy 500 features prominently in today’s race history lesson – Ralph DePalma won in 1915, Mauri Rose in 1948 and Bill Vukovich took his second win on the trot in ’54. And while many may believe Jimmy Clark was the first non-American to win the 500, that’s not quite true. Clark was however the only driver ever to win the 500 and the F1 World Championship in the same year in ’65. More recently, Bobby Rahal won the ‘86 500.

In other racing of note over the years on 31 May, Emilio Materassi won the 1925 Circuito del Mugello in his Itala Hispano-Suiza Special, Brian Lewis the ‘35 Isle of Wight Mannin Moar in his Bugatti T59, Jorge de Monte Real Brazil’s ‘36 Circuito de Santarem in a Bugatti T35C and
Eddie Hertzberger’s MG K3 the ’36 GP des Frontières in Belgium.

Louis Rosier took his Ferrari 375 to victory in the GP de l’Albigeois at Albi, France in ‘53, George Cannell the final Johannesburg Union Day Trophy in his Cooper Chevrolet V8 in 1960 and after South Africa became independent of the UK, Ian Scheckter drove his Tyrrell 007 Cosworth to win the 1975 Republic Trophy at Kyalami.

In sports car racing, Ludovico Scarfiotti and Nino Vaccarella won the ‘64 Nurburgring 1000 in a Ferrari 275P Kurt Ahrens and Vic Elford won in ’70. Brian Redman’s Lola T600-Chevrolet won the 81 Mid-Ohio Can Am and in IMSA, John Fitzpatrick won Lime Rock ‘82 in a Porsche 935, Davy Jones Mid-Ohio ‘92 (in a Jaguar XJR-14, Juan Manuel Fangio Lime Rock ‘93 in an Eagle Toyota, Max Angelelli and Ricky Taylor’s Dallara Ford Lime Rock 2010 and Taylor and brother Jordan the 2014 Sports Car Classic in a Corvette.

The World Rally Championship regularly visited Greece on this weekend over the years where Walter Rohrl won the ’75 Acropolis Rally in an Opel Ascona, Bjorn Waldegard ’79 in a Ford Escort RS1800, Stig Blomqvist ’84 in an Audi quattro A2 and Carlos Sainz ’94 in a Subaru Impreza, while Sebastien Loeb won Turkey ‘05 in a Citroen Xsara.