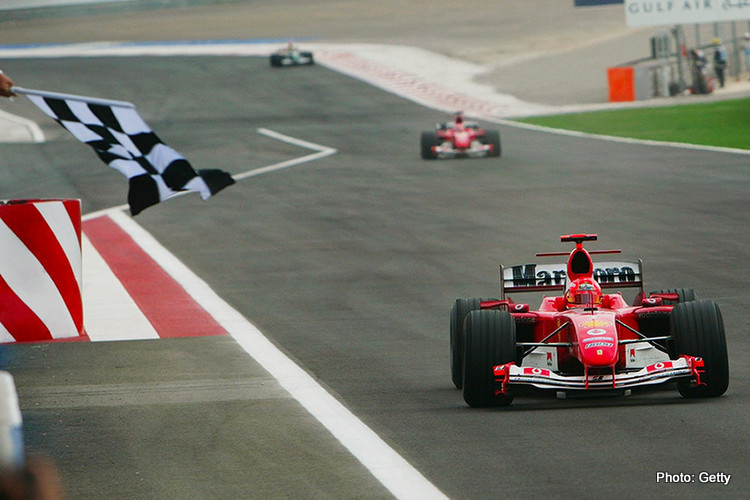 Today is the biggest day in the race history year for various reasons.

Not least of those is that the Indianapolis 500 for many years ran on US Decoration Day, which later became Memorial Day.

Starting with Formula 1, Graham Hill’s BRM won the 30 May 1965 Monaco Grand Prix ahead of Lorenzo Bandini’s Ferrari and BRM teammate Jackie Stewart, but that day also be remembered for Paul Hawkins’ cursing after emerging unscathed from crashing into the harbour…

Schumacher won a strategic 2004 Grand Prix of Europe at the Nürburgring from Ferrari teammate Rubens Barrichello and Jenson Button, whose BAR-Honda teammate Takuma Sato squandered a podium third in a desperate late passing attempt on Barrichello.

Indycar racing and the 500 however have a far deeper history as part of AAA Champ Cars on 30 May every year. Ray Harroun won the 1910 Brassard Trophy, before taking the first International 500, the official race title back then, averaging 75 mph in a Marmon Wasp in 1911. Joe Dawson won in 1912 Jules Goux in ‘13, Rene Thomas ’14 and Dario Resta in ‘16.

After that, the International 500 ran every year with Tommy Milton winning in 1921 and ’23, each side of Jimmy Murphy, while Joe Boyer won in ’24. Pete DePaolo was first to average over 100 mph in ’25, before Frank Lockhart, George Souders, Louis Meyer and Ray Keech won through to ’29. Billy Arnold won in 1930, Louis Schneider in ’31 and Fred Frame in ’32.

Louis Meyer won twice more, in a brutal 1933 race and again when he was first to famously sip milk in victory lane in ’36. Bill Cummings won in ’34 and Kelly Petillo 1935 when the need to slow for a yellow caution flag was first introduced. Wilbur Shaw won three times in 1937, ’39 and 40, Floyd Roberts won in 1938 and Floyd Davis took the last pre-War win in ’41.

There were three 500s post-War, when George Robson won in ’46, Mauri Rose in ’47 and Bill Holland in 1949, after which the race became part of the F1 world championship and has since officially been known as the Indianapolis 500.

Other significant race history stretches way back to 1904 on this day, when Alexandr ‘Basil’ Soldatenkov’s Richard-Brasier won the Strelna road race. There were two races this day 1905 when Clifford Earp’s Napier won a Gordon Bennett Eliminator and Konstantin Kapustin’s Richard-Brasier the Kubok-Belyaeva road race.

More recently, Yves Giraud-Cabanotous won the 1948 GP de Paris in a Talbot T26, Leslie Marr’s Connaught the 1955 Cornwall Race and Ross Jensen’s Maserati was victorious down under at Bathurst in 1959.

Moving on to sportscars, Vic Elford and Gerard Larrousse won the 1971 WSC Nürburgring 1000 in a Porsche 908/3, which race Dieter Quester and Albrecht Krebs won in a BMW 3.5 CSL in ’76 and Michele Alboreto, Teo Fabi and Riccardo Patrese won in a Lancia LC1 in ‘80.

Bill Adam and Bob Tullius won the ‘83 Lime Rock US IMSA race in a Jaguar XJR-5, while Geoff Brabham’s Nissan ZX-T won there in 1988, Gianpiero Moretti and Eliseo Salazar’s Ferrari 333SP ’94 and -Max Angelelli and Ricky Taylor’s Dallara Chevrolet in 2011.

And while the Indy 500 brought much ecstasy over the years, so too did it deliver agony. Louis LeCocq and Arthur Thurman both perished in the 1919 race, but the 1933 500 claimed the lives of Bill Denver and his riding mechanic Bob Hurst, Mark Billmana and Lester Spangler and his mechanic ‘Monk’ Jordan.

Carl Scarborough succumbed to heat exhaustion in the hottest 500 on record in 1936, ’38 winner Floyd Roberts died in a 1939 crash and double-winner in ’53 and ’54 Bill Vukovich died after he crashed out of the lead of the 1955 race. Pat O’Connor lost his life at Indy’ 58 and favourite Eddie Sachs and rookie Dave MacDonald both died in a fiery ’64 crash.