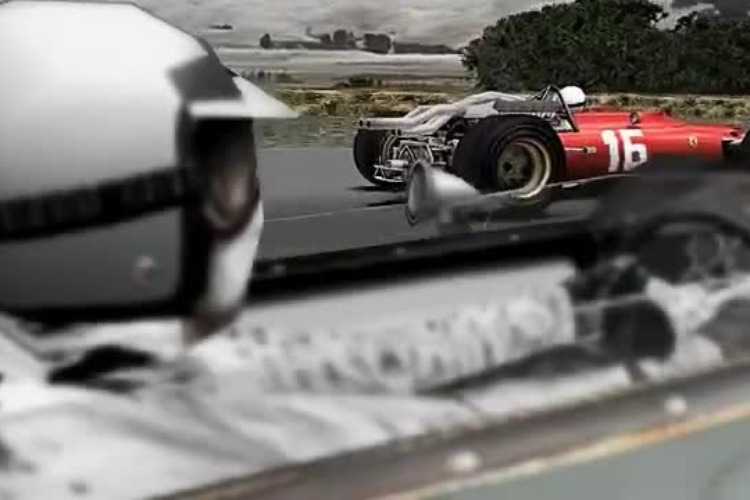 Over the years, sim racing has inspired an entire community to create some fabulous contributions. From fictive tracks to full fledged movies.

“It takes an artistic touch to get the most out of any racecar.” The quote is one from Sir John Young Stewart, three times Formula 1 world champion and better known to the world as Jackie. With the quote, Jackie nailed one of the striking similarities between real life and virtual racing cars. Getting the best out of a virtual racing car indeed also requires an artistic touch.

There is a hard-to-define beauty in witnessing a Greger Huttu, Richard Coxon or David Jaques enter a server. Do some laps and then, apparently effortlessly, obliterate the virtual lap time that a mere mortal like me has achieved after days of painstaking practice. Just like any other kind of beauty, it bruises the ego. Yet leaves that shimmer of hope that maybe one day… It is akin to contemplating a Patrice Poutout bust or a Léon Spilliaert painting. Even if indefinable, it is very real and is often referred to as the artistic touch.

It should thus be no surprise that part of the simming community at some point started exploring the different arts to vent some of the pleasure sims provided them. Screenshots, with or without post-editing, have been around as long as I can remember. Categorizing those under Hegel’s third art seems exaggerated in most cases but exceptions do exist.

Some of the GPL short movies released in the mid-noughties however most definitely entered into what Ricciotto Canudo labeled the seventh art.

When a man called Peter Van Der Burg released a utility called Camera Control Master for GPL, it was all people like Atumno, SlowMoe, Barchetta or Kinst VonSterga needed to promptly transform into the René Guissart Jr. and Robert B. Hauser of sim racing. Some of the short movies they released to the world are, even to this day, absolute gems.

YouTube still had to grow into the mainstream video platform it is nowadays. So most of these movies had to be downloaded which, with internet speeds back then, often had my computer toiling all through the night. But the joy when I caught the first glimpse of those movies in the morning, just before leaving for the office… And then spent the entire day longing for the evening… finally able to repeat the full movie a dozen or so times.

The movies released by Slowmoe and Atumno are often considered as about the best the era produced.

My two favorites were always Barchetta and Kinst VonSterga however. They, like no one else, mastered the art of capturing astonishing footage from GPL’s replays, had a sixth sense to apply just the perfect level of filtering and post-effects and, to top it all off, always managed to discover just the right soundtrack.

This genre of sim movies seems to have largely extinguished after GPL. The current trend of broadcasting everything on YouTube and Twitch is probably one of the causes.

Still, once I decided to make some kind of retribution to the community that had given me a million different cars to drive and a zillion tracks to drive them on, those GPL-movies were my primal source of inspiration.

So when my spouse and I took off for a second honeymoon, I found myself working a tan by the pool of a secluded boutique hotel on Mauritius while assiduously ticking away on my Dell XPS M1210.

External hard drives had already entered the realm of the computer world and that allowed me to carry along a ton of material captured from replays. All that was left doing, was edit them into an end product.

My efforts by the Mauritius pool resulted in two movies, one covering two races in the Vlaamse Racing League, a league where I regularly raced back then, and a shorter movie putting Colin McRae Rally head-to-head with Richard Burns Rally.

I am also quite happy with a series of 11 videos that I made some years later and that cover an entire Trans-Am season organized by the Historic Simracing Organization. These movies can be viewed here: https://intersectiondiaries.com/category/j-p-voigt/1971-trans-am/the-videos/

Drafting race reports was the next stage. What started as basic forum posts evolved into full fetched reports with pictures and finally ended up being a blog: www.intersectiondiaries.com.

It is only my humble way of giving back something to a community that has given me endless evenings, and often entire nights, of sheer fun.