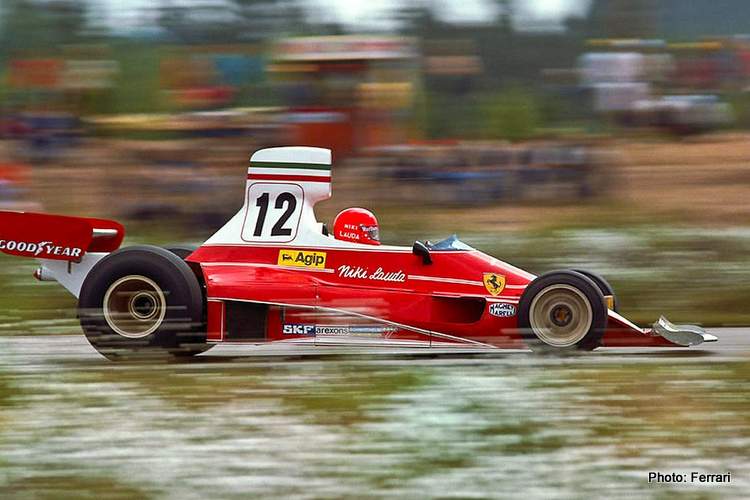 Niki Lauda’s Ferrari 312T won a busy 1975 Belgian Grand Prix at Zolder to move into the lead of the Formula 1 World Championship.

Jody Scheckter was second in a Tyrrell 007 with Carlos Reutemann third for Brabham. Also in Belgium, but at Spa in 1986, Nigel Mansell’s Williams-Honda beat Ayrton Senna’s Lotus-Renault and Stefan Johansson’s Ferrari.

Jacques Villeneuve won the 1997 Spanish Grand Prix in a Williams-Renault from Olivier Panis’ Prost-Mugen and Jean Alesi in a Benetton-Renault.

An early puncture proved fortuitous for Lewis Hamilton’s McLaren as he emerged victorious over Robert Kubica’s BMW Sauber and Felipe Massa’s Ferrari through changing conditions at Monaco ‘08. Nico Rosberg’s Mercedes was meanwhile unstoppable on his second Monaco win on the trot from teammate Hamilton and Daniel’ Ricciardo’s Red Bull in 2014.

Late May is Indianapolis 500 time and winners on the 25th include Bobby Unser in a rain-shortened ’75 race, Johnny Rutherford in 1980, Gil de Ferran by two-hundredths of a second over Penske teammate Helio Castroneves in in 2003, Scott Dixon ’08 and Ryan Hunter-Reay in 2014.

25 May birthdays include US legends Smokey Yunick and AJ Foyt IV, while Pierre de Caters and his DMG Mercedes Simplex broke the World Land Speed Record in a 97 mph run on the beach at Ostend, Belgium in 1904.

Motorsport also lost a king on 25 May when double Formula One World Champion and Mille Miglia winner Alberto Ascari died aged 36 while testing for Ferrari Monza in 1955. The highly superstitious driver’s unexplained accident happened when he was at exactly the same age as his father, the great Antonio Ascari was when he died on the same day of the month and in eerily similar circumstances.