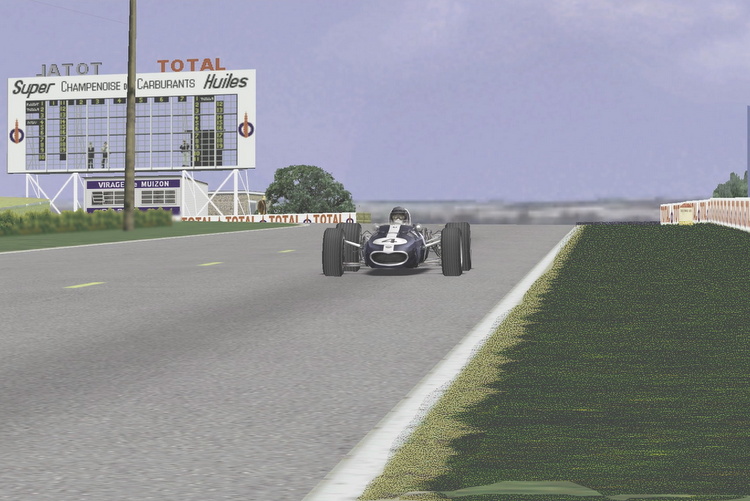 My year 2008 was dominated by one single story: the struggle for ultimate dominance over season 7 of GBGPL’s Division 2.

It is impossible to comprehend how sad Belgian November months can be without having endured several of them. The mere daybreaks suffice to render even the most fervent of optimists suicidal. Pitch dark windows sink the world in a gloom that will never entirely dissolve throughout yet another rimy morning. On the better days, by the time of noon some muffled rays of sun burst through a tick cloud deck. Dispersing the faintest of glows, marred by a bitter chill dampness seeping through body and soul. Till man feels nothing but wet, cold and miserable… Such are November months in the Low Lands, where the icy winds of the North Sea are a constant menace.

No November month had been worse than that of 2008 though. Eternal clouds and rainy mist shortened periods of daylight to the point it felt as if we had entered a never-ending polar night.

To add woe to misery, on the last Thursday of that November, I had to attend a cocktail reception in the early evening. The kind of event to which one wears a suit and leather soled shoes. So I got my trusted Scribes out of the closet. And, as much as I love them, soon had to admit that leather soles suck at soaked days. Tod’s leather shoes with fat rubber soles are way better at such days. But you just don’t wear those to fancy cocktails.

Before it was even 11 am, the moistness was already welling in my shoes and slowly permeating up to my bones. Sending shivering spasms of soggy iciness through my spine. My nose was dripping, my eyes were prickling and I felt miserable as hell. It was a good old November day alright.

Still, I managed to make it home in time to be in my racing rig by 9:15 pm-ish. Charterhall, your typical British airfield track, was the venue for GBGPL Season 7’s grand finale. I was leading the provisional standings and fifth, or just finishing ahead of a Robert Burton who was second in the standings, would suffice to seal the deal. No way on earth that I was going to miss that… Not even for a fancy drink on leather soled shoes.

To top it off, I had one last joker up my sleeve. GBGPL seasons traditionally ran over fourteen races, with participants being obliged to use each of GPL 1967’s chassis twice. I had saved my two Lotus drives for last and therefore, at Charterhall, was in what was considered the best car in the game. Eternal GBGPL-glory loomed…

Things had started out under much less favorable conditions six months earlier, in late May of the same year. The season had kicked off at Rouen-Les-Essarts, one of the most epic race tracks the world ever witnessed. The Six Frères section leading down to the Nouveau Monde-hairpin alone far exceeds what many contemporary tracks have on offer.

I had opted to start the season in a BRM, generally considered the worst car in the business. Just to have it out of the way. Still, during endless laps of practice, I had somehow fallen in love with the BRM around Rouen. And all that practice paid off. I qualified the BRM fourth. With two of eighteen laps to go, I was running a solid third and looked like grabbing a podium finish; not a small achievement in a BRM at Rouen. Then a lapped guy in a Lotus took me out. Instead of a podium, I walked away from Rouen with exactly zero points.

I did not fare much better in the second race: Mosport, again in a BRM. I finished fifth, bagging 18 points. That put me well out of the top six, trailing then leader Burton by more than 30 points. Still, I had served my two BRM-drives.

Things took a serious turn for the better at Albi, scene of the third race. Comparing the lap times I was running to the times on GPL-Rank provided a good vibe for the race. I grabbed pole with just under one tenth of a second over Adam Beales, held on to the lead at the start and spent most of the race ahead. On the penultimate lap, I however spun my Cooper around in the Double Droite de l’Aerodrome, letting Adam slip past. With only one and a half laps to go, victory seemed lost. But then, lady luck smiled my way. Beales ran out of fuel, handing me back the lead. I left Albi with pole and victory, Adam having snatched fastest race lap. The win catapulted me to 4th in the standings, reducing the gap with the top spot to 22 points.

I stayed in a Cooper for the Glen, where it just lacked power against Burton’s Lotus. I secured second behind Robert, after a gigantic race-long battle with Gabor Soos, also in a Cooper. I moved up one spot in the championship standings, but Burton had slightly increased his lead.

Next up were Monza and Reims, two absolute power tracks. So I opted for the Eagle, which seemed like the obvious choice for circuits with such fast lay-outs. While preparing, the Eagle put me negative for Monza on GPL-Rank. It resulted in a pole, with a lap over half a second faster than Burton, who had also entered an Eagle. Things looked good, were it not that I still had a hard time getting the Eagle going from a stand-still. I fluked the start, falling back before we even reached Curva Grande, and then my eternal Parabolica-spell did the rest. Somewhere mid distance, I braked late and spun out. I rejoined the track in fourth, which was where I finished. Burton however finished only fifth, allowing me to make up some ground in the championship standings.

In Reims, I put the Eagle solidly on pole. I had a good getaway, only for Burton to spin me in Muizon. During the next 14 laps, I squeezed absolutely everything from the Weslake engine, clocking fastest lap of the race close to 3 tenths of a second faster than Soos in a Lotus, and over 2 seconds faster than all other contenders. But it was not enough. Soos won the race and I was left stranded in second. Burton only came fourth, so championship-wise, it was still a good result. But Reims felt like it should have been a win.

The Eagle should have handed me victory at Reims.

Then came the old full 14 kilometers of splendid Spa, a track where I never have been very competitive. So, I took the Honda down to the Ardennes and still managed third behind Burton and Beales. I also kept third in the provisional standings but was again trailing Burton with close to 30 points.

I convincingly put a Ferrari 312 on pole in Mexico City with a lap over half a second faster than Burton’s Lotus best. As the starting flag dropped, Burt however had the race pace. He grabbed the lead before the first corner and started edging away. But back in 1967, the Lotus’ Cosworth was still a fragile thing. With about 10 of the 20 laps covered, Burt’s engine blew and I grabbed a lead that I would never surrender. Robert soldiered on to second though, grabbing the point for fastest race lap along the way and thus maintaining a 24 points lead in the standings.

I chose Silverstone as my second and last Honda-drive, as there again was a track I did not expect much from. The turn-out for the race was historically low, allowing me to still secure second, behind an untouchable Burton. Even if I moved into second in the standings, I was still facing a 30 points deficit to Burt.

With five races remaining, I however had the luxury of having only Ferrari, Brabham and Lotus seats left, while Robert still faced one race with the Honda and one with the BRM.

I only qualified the Ferrari fourth at Zandvoort, over half a second slower than an amazing Adam Beales in a Cooper. It did somehow not stop me from nearly grabbing the lead in the Hunzerug, the third turn at Zandvoort, on lap one. But the move turned sour and I ended up rejoining the fray all but last. Twenty-seven laps later, I nevertheless crossed the finish line first, handing victory to a rather listless Commendatore. The gap to Burton decreased to 20 points.

Beales and I, both in Brabhams, went head-to-head during the entire race at Snetterton. Adam came out on top in the end, beating me to the flag by a mere 0.3 seconds. Burt had an off-day around Snetterton, failing to get any points at all. Which, after 11 races of catching-up and with 3 races to go, put me at the top of the standings.

I missed the next race at Kyalami, allowing Burt to move back into the lead with a 17 points advantage. With now only two races left, I still had my work cut out for me. I was however allowed into the Lotus for both these races, while as Burt still had his Honda- and BRM-duty to serve.

The penultimate round was Zeltweg. Few tracks are more suited to the Lotus 49 than the old Zeltweg, so yours truly did what was needed: pole, fastest race-lap and victory to top it off. A full hat-trick that inverted the situation in the standings: I was now leading Burton with 14 points with one race left. Still, 31 points remained up for grabs in that last race, so things were not settled.

And that is how we headed for Charterhall. The Hethel-boys again gave me a great car, but it could not prevent Beales’ Eagle to snatch pole by 0.046 seconds. When race-day came, Lotus teammate Mike Ratters and me however had the best getaway and soon were in a solid lead. Mike was at least as fast as me and, for a while, I considered letting him go; second by now largely sufficed to secure the championship. But I then decided to put the hammer down just one more time and go for that one last victory to end a fabulous season. 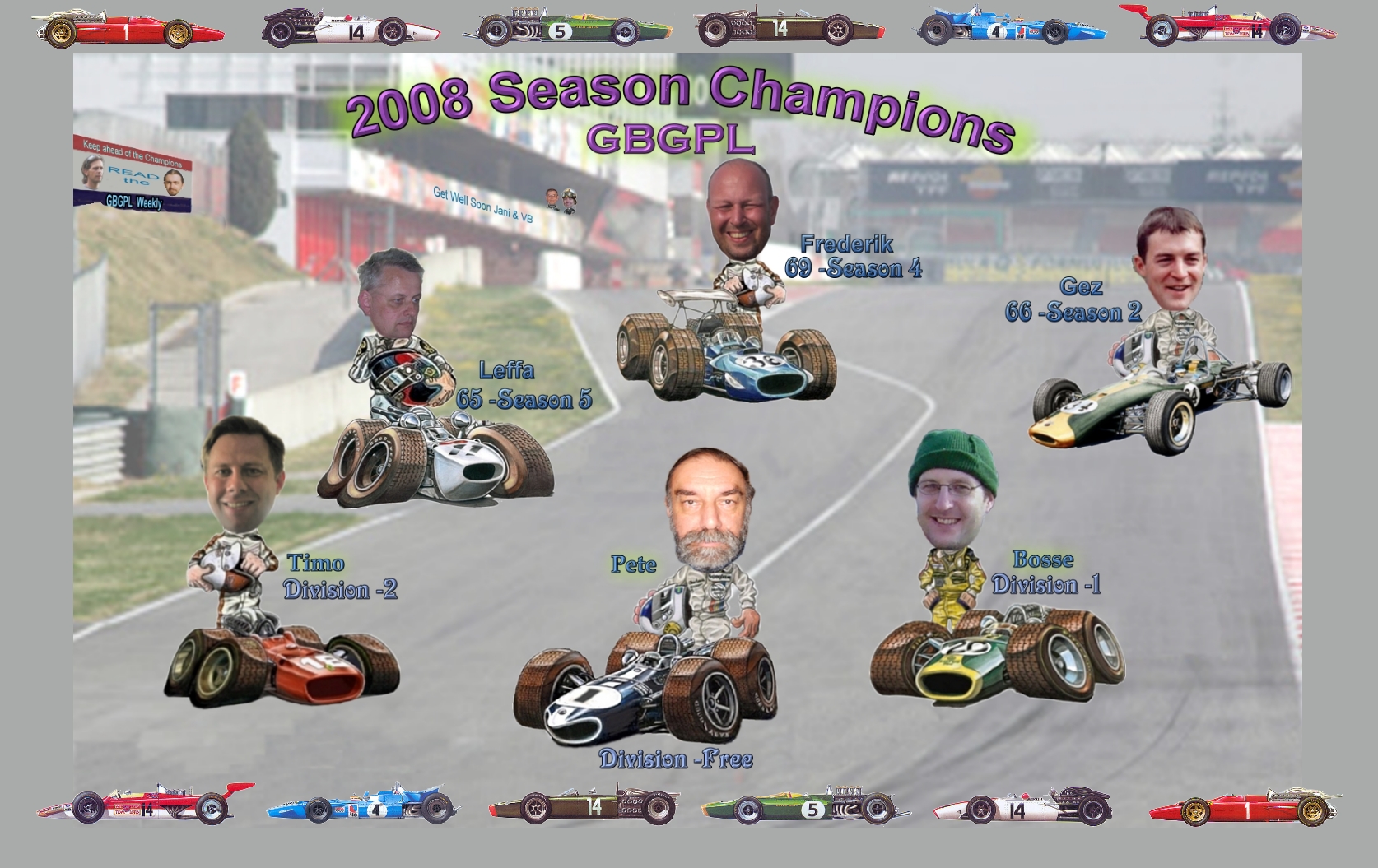 At each year-end, one of the GBGPL-fellows made a cartoon with that season’s winners. In 2008, I made the cut.

As it stands, this remains the only online season I ever managed to win. Its races to this day, probably because of the outcome, still contain many of my best race-sim memories ever, even if it was “only” Division 2. That season had everything in it from thorough disappointment to ultimate joy.

Even today, more than 20 years after its initial release, people still organize online races for Grand Prix Legends and a still considerable community is working on improving this by now robust grandfather of sims.

All the results of my august season are still kept online here by part of that community.

I cannot think of any greater testimony to what Grand Prix Legends ended up representing, and still represents, to sim racers around the globe. In all honesty, I do not think that I will live the day to witness a bigger institution in sim racing.